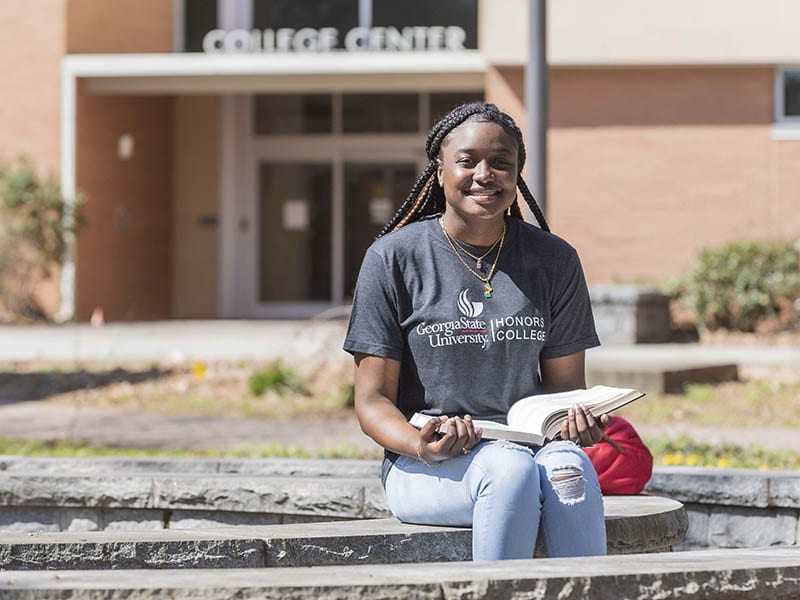 CLARKSTON, Ga. — A typical day for Khea Archer often means working an eight-hour shift at her job as a manager at a local fast-food restaurant then switching gears and studying for an Honors class quiz or writing a paper.

It’s a pace students might find hard to juggle, but the 20-year-old Archer keeps up by studying into the early morning hours after coming home from work. She’s been able to maintain a 3.94 grade point average.

Her academic drive and work ethic have been recognized by her professors, who also cite her engagement in their classes.

Archer, a business administration and Honors College student at Georgia State University’s Perimeter College recently was named a semifinalist for the competitive Jack Kent Cooke (JKC) Undergraduate Transfer Scholarship. Finalists for the scholarship receive up to $40,000 per year for up to three years to complete their bachelor’s degree.

A native of Guyana in South America, Archer came to the United States with her mother in 2018 when her mother married.

“I had graduated from high school in Guyana, so when I got here, I was 17, and I didn’t look at college right away,” she said. “When I decided to take my SAT, that was kind of hard. A lot of the concepts were different from what I was accustomed to. And I also was accustomed to using paper, not going online.”

Archer found a job at a fast-food restaurant close to home but soon decided to try college also. In 2019, she enrolled at Perimeter, where she thrived.

“I’ve always been ambitious and wanted to better myself,” she said. “At Perimeter, I was introduced to a lot of professors who were very concerned about how I was progressing as a student. They took the time to make sure I was doing well.”

“I tend to suggest the (Jack Kent Cooke) scholarship to students such as Khea whose potential seems to reach past their current circumstances in particularly impressive or engaging ways,” Weaver said. “Khea’s maturity, leadership, intelligence and generosity really impresses me.”

“Khea was a student in a few of my Honors classes,” Flato said. “I could always count on her to take the assignments seriously and raise thoughtful questions in class. She’s also very motivated.”

College has prompted Archer to revisit career ideas she considered long ago: becoming an attorney, possibly a corporate attorney.

At Perimeter, she rediscovered her high school love for economics.

“I’m drawn to economics because it gives answers on how a lot of things in society work,” she said, “and I’m absolutely in love with constructing the different models to explain different theories.”

She has not narrowed down a specific career path but is enjoying exploring the options.

Archer plans to graduate in May and attend Georgia State’s Atlanta Campus or the University of Georgia to pursue a bachelor’s degree in economics.

The Jack Kent Cooke Scholarship would help her reach that goal, she said.

JKC recipients are selected based on factors such as leadership, service to others, academic ability and persistence. It is the largest private scholarship for two-year and community college transfer students in the country.