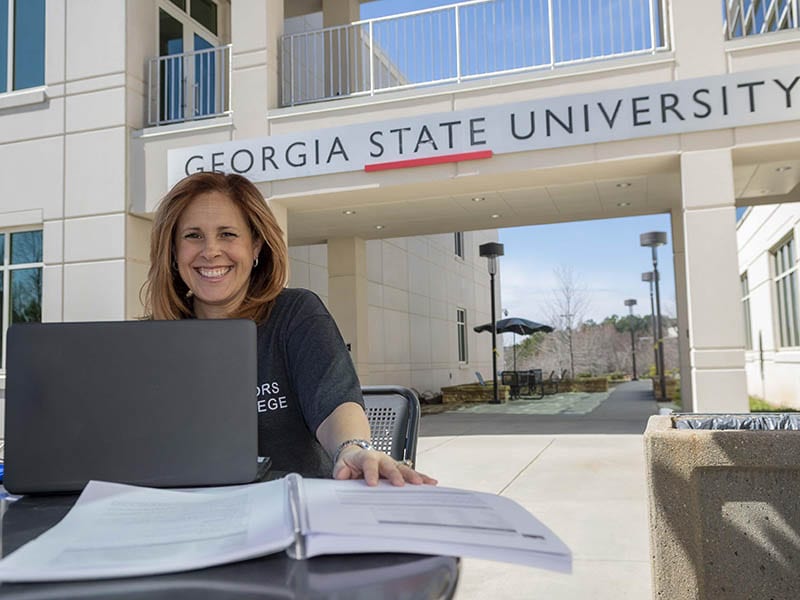 After years of sidelining her postsecondary education goals, Perimeter College student Zaida Crosby is crushing it in the classroom — and getting noticed by institutions such as Yale University.

Crosby says she received an email from Yale inviting her to apply because she is among the semifinalists for the competitive, national Jack Kent Cooke (JKC) Undergraduate Transfer Scholarship. The award gives each winner up to $40,000 per year for up to three years to complete their bachelor’s degree. It is the largest private scholarship for two-year and community college transfer students in the country, with winners selected based on factors such as leadership, service to others and academic ability.

“I’m still in shock, I really am,” said Crosby, who’s in Perimeter’s general studies pathway with plans to pursue a career in gerontology — the study of aging.

She received the semifinalist news in late February while taking a heavy load of classes, including biology, introduction to neuroscience — with labs — and sociology.

Crosby has been on a fast track to earn her associate degree since moving from Florida to Georgia last year with her husband, Dave, who transferred here for a position as a critical care nurse specializing in cardiac electrophysiology. A Navy veteran and former fire department captain, he encouraged Crosby to revisit her dreams of earning a college degree.

She enrolled at Perimeter in June 2020 with earned credits and will graduate in May.

“She is a critical thinker with a vivid scholarly imagination. She sees people and social issues through a sociological lens and treats all individuals with an open heart and mind, respect and dignity.”

A classroom standout, Crosby also is a published author and certified Christian Life Coach who first attended college nearly 30 years ago after graduating from high school in Florida. She dropped out to work in sales and marketing and help care for her family.

At Perimeter, Crosby’s activities include membership in the Phi Theta Kappa (PTK) Honor Society, and she recently was invited to participate in PTK’s All-USA Academic Team competition.

Despite being contacted by Yale, Crosby plans to transition to Georgia State’s Atlanta Campus and enroll in the university’s Gerontology Institute, citing its strong reputation. Her goal is to complete her doctorate and become a college professor.

“I want to show everybody that you’re never too old to pursue your dreams,” Crosby said.

The announcement of this year’s Jack Kent Cooke scholarship winners is expected in April. Since 2002, the foundation has awarded 21 Perimeter students the scholarship.