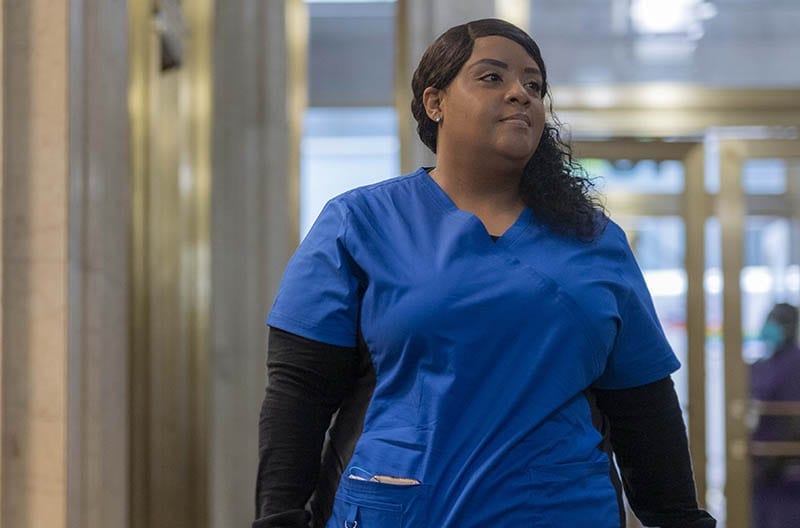 Perimeter College student Tiffany Watts-Ferguson calls those who have been tested for COVID-19 to tell them the results.

ATLANTA—Tiffany Watts-Ferguson spends her workdays delivering what is often emotional news to anxious people. She telephones those who have taken a COVID-19 test to tell them the results.

Watts-Ferguson, a health sciences student at Georgia State University’s Perimeter College, is a licensed practical nurse with Fulton County Public Health. She and her fellow nurses not only notify people of their test results, they counsel them and — in cases where tests are positive — assist in contact tracing, gathering information about where contagious people may have been.

Until three months ago, she never envisioned herself having this role.

Watts-Ferguson, 48, worked for more than 20 years as a program nurse with Fulton County Senior Services. When public concern about the coronavirus surged in mid-March, she was reassigned to the Office of Epidemiology at Fulton County Public Health in downtown Atlanta.

Now, she strives to be a source of information and calm during the COVID-19 pandemic.

As Georgia has ramped up testing, Watts-Ferguson’s work has grown. On June 4 alone, 3,000 results were reported to Fulton County’s health department. (As of June 16, the county had 5,157 positive cases and 290 COVID-19-related deaths.)

“Every day, we’re calling hundreds of people, whether they’ve gotten a negative reading or a positive reading,” she said.

Receiving the news can be emotional for those who test positive. Delivering it can be taxing for Watts-Ferguson.

“I’m hearing people crying, ‘I’m gonna die,’ and there is a lot of panic,” Watts-Ferguson said. “We’re having to be the voice of reason.”

In May, she talked to 130 people tested at a single long-term care facility in the county. Of those, 104 of the patients and staff members tested positive.

“It’s so overwhelming at times,” she said. “I got a call from one of the family members (whose parents were) at one of the long-term care facilities. She lost both her mom and dad a week apart from COVID-19. She just wanted to talk.”

Watts-Ferguson prays daily to face the challenges of her job.

“I wake up every morning at 5:30 a.m. and meet (virtually) with a prayer group,” she said. “It helps prepare myself for what’s ahead of me.”

Watts-Ferguson enrolled at Perimeter College in 2019 with the goal of becoming a registered nurse. After finishing her prerequisites for Perimeter’s nursing program, she plans to apply to the college’s Licensed Practical Nurse-Registered Nurse bridge program in 2021. She hopes to earn her master’s degree in nursing.

Although she did not foresee her move from working with the elderly to assisting in the response to the pandemic, Watts-Ferguson has been inspired by the COVID-19-related work she is doing. She particularly likes the investigative work involved in following up on symptoms and contact tracing, she said.

“In the midst of all this, I have found more of an interest in public health than I ever thought I would,” she said.