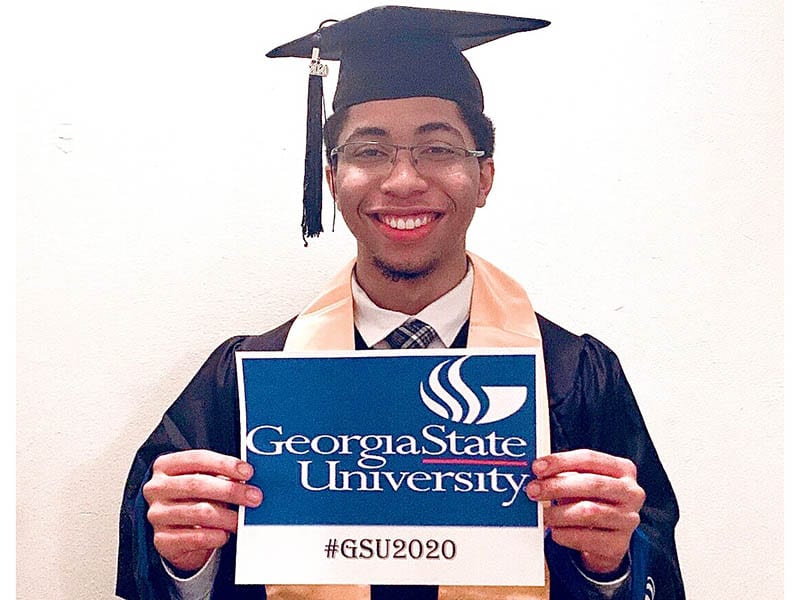 DUNWOODY, Ga.—David Gaines has ambitious goals. His plan: to be a neurologist, a neurosurgeon and an attorney specializing in health sector law and policy.

Why not? At 16, he’s the youngest graduate candidate in Georgia State University Perimeter College’s Class of 2020. He’s an extremely motivated biology student with an “endlessly curious mind,” according to Perimeter assistant professor of biology, Dr. Kimmy Kellett.

Before he got his driver’s license in fall 2019, the Sandy Springs, Ga., resident already had taken junior-level college courses on Georgia State’s Atlanta Campus. He expects to have about 90 credits by the end of summer 2020 and earn his bachelor’s degree in biology with an emphasis on microbiology in spring 2021, two months shy of his 18th birthday.

Gaines is preparing to take the MCAT (Medical College Admission Test) and hopes to start a six-year medical doctor (M.D.)/juris doctor (J.D.) program in fall 2021. He wants to become a neurosurgeon and neurologist, initially serving rural and underserved areas before opening his own practice.

“In the J.D. program, I will focus on the health sector of law, leadership and policy, as well as the legal aspects of running a private practice,” he said.

“He has an endlessly curious mind, is very responsible and motivated,” Kellett said. “He is unique. Every opportunity you’d tell him about, he wants to take part in.”

Drawn to Medicine Early in Life

Gaines, who grew up in North Carolina, said he was inspired early to become a doctor after seeing his pediatrician calm a worried mother.

“I saw my pediatrician helping a screaming baby,” Gaines said. “There was just enough opening in the door to see her whisper into the mother’s ear, and I remember the look on the mom’s face. She went from looking sad and fearful to completely elated. From that day, I wanted the magic of the white coat. I wanted to help people feel the way my doctor made that mom feel.” 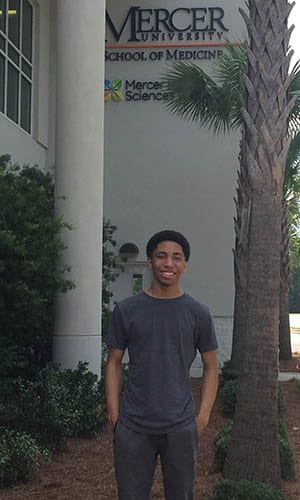 Gaines’ interest in medicine grew. He often accompanied his mother to his sister’s neurological appointments. (She was born with a brain tumor but was treated and now leads a full life). He also helped in his grandfather’s recovery from a stroke.

“I realized I wanted to work with neurological diseases, which is why I started volunteering at the Shepherd Center in the rehabilitation unit two years ago,” he said.

Gaines also has a personal interest in medicine because he has asthma. His bouts during elementary school led to prolonged absences with pneumonia and helped his mother decide to homeschool him, starting in fourth grade. That decision was supported by his teachers and principal, who saw he was bored in class, said Pamela Gaines, David’s mother.

“He actually started asking me about homeschooling when he was in the first grade,” she said. “But I said no at the time. I wanted him to develop his socialization skills.

He finished most of his high school curriculum by age 11, she said.

The family moved to Georgia, and Gaines enrolled at Perimeter College in 2018 at age 14.

“Having the opportunity to start at a smaller setting like Perimeter and transition to a large classroom allowed me to meet all of my academic needs,” he said. “We felt I would have the greatest opportunities at Georgia State,” he said.

A divorced single mom, Pamela Gaines has juggled her work as a business consultant, often waking at 4 a.m. to get ready for clients, then homeschooling her son and returning to work in the afternoon. When Gaines enrolled at Perimeter, his mother drove him and worked with a Wi-Fi hotspot and her computer in parking lots and common areas while her son went to class or club activities.

Gaines looks forward to going to the Atlanta Campus full time, but will have to wait to move on campus, due to the COVID-19 pandemic and social distancing requirements.