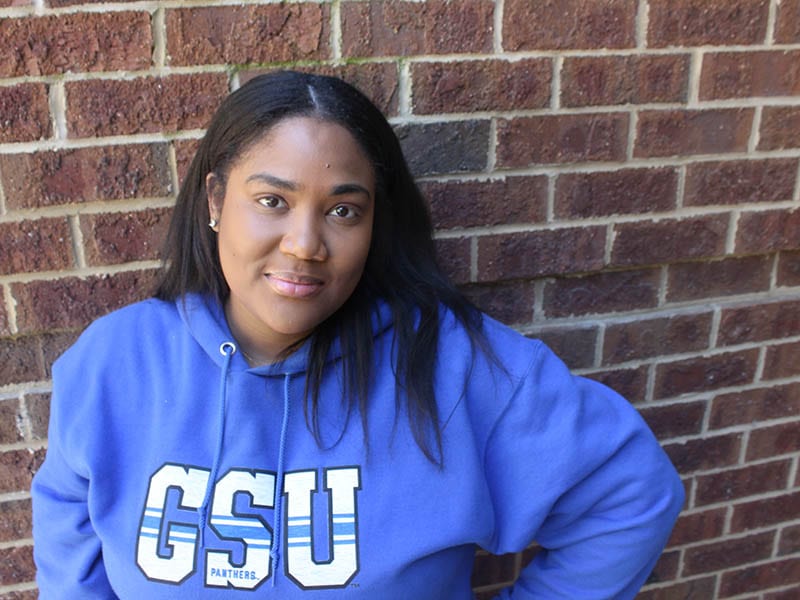 CLARKSTON, Ga.—Five years ago, Andrea Green threw everything in her car and moved from Pensacola, Fla., to Atlanta. She knew no one. She didn’t have a place to live. She did have a mission, though — to go to college.

“I struggled with homelessness for a while,” she said. “I lived in my car, at the Greyhound station, sometimes in strangers’ homes. It was a dangerous time.”

Now 28, Green is graduating as one of the top engineering students at Georgia State University’s Perimeter College. She is among 2,185 spring and summer graduates in Perimeter’s Class of 2020.

An Honors College student with a 4.0 grade point average, Green has been on Georgia State’s President’s List three times.

During Georgia State’s Undergraduate Research Conference, conducted online in April, she and a fellow student received a Sustainability Award for research focused on environmental protection and ecological problem-solving. Green also was the only two-year college engineering student selected to attend Columbia University’s Engineering Achievers in Graduate Education (EngAGE) earlier in the semester.

Her academic success contrasts with her early days in Georgia.

“I was extremely naive when I moved here and felt that I could find employment when I got here,” she said. “That wasn’t the case.”

While living in her car, she reached out for help from new acquaintances.

“I had to temporarily trust people I met on a day-to-day basis,” she said.

When they learned of her situation, some offered food, job information and a place to sleep at their house.

“I did not accept from just anyone,” she said. “The people who helped me always had a college education, from a bachelor’s degree to up to a Ph.D. I took this as sign that everything was going to be fine and to put the danger behind me. I felt I had nothing else to lose at that point.”

She realized the precariousness of her situation.

“Although they were nice and seemed genuine, they were still strangers, and anything could have happened to me,” she said. “Luckily, I was never harmed.”

Green struggled to find a job in call centers and customer service, fields where she had experience.

“I finally decided to apply outside of those (fields) and landed a position at JCPenney,” she said.

She picked up two additional jobs, one in a portrait studio and another as a bartender at Buckhead dine-in theater complex. For a while, she worked all three jobs.

The jobs helped Green move out of homelessness and get an apartment. They also allowed her to tackle college.

She enrolled at Perimeter, choosing to follow the college’s engineering pathway.

“I liked math, and I liked problem-solving,” she said. “Engineering had both.”

Discovering Her Passion for Research

Green was selected as a scholar for the Peach State Louis Stokes Alliance for Minority Participation (LSAMP), a National Science Foundation program that encourages science, technology, engineering and mathematics (STEM) careers for women and minorities.

While participating in LSAMP’s Summer Bridge program, she began research on commercial water filters and homemade water filters. The work led to her desire to study chemical engineering.

“I discovered I was excited to be in the lab,” she said. “I loved it.”

Finding her passion took a while, Green said. Although a good student in high school, she struggled with low self-confidence.

“I thought I needed to be twice as good as everyone else because I’m a woman and a minority,” she said. “And when I wasn’t, I thought I failed. It caused me to lose self-confidence. I finally realized that that image was wrong. I didn’t need to be better than anyone else, just better than myself at the last stage.”

Green credits the Perimeter College community — from her STEM and English professors to her LSAMP advisers — with helping her to improve herself and achieve excellence.

“I really have to give it to my professors at Perimeter,” she said. “They push us in a way that if you take advantage of the entire program, you come out a brand-new person. I’m really happy with the experience here and couldn’t ask for anything better.”

Green hopes to study chemical engineering and continue her research in renewable energy and sustainability. She has applied to Columbia University, Georgia Tech, the University of Georgia and Stanford University.