Investing in Her Future

Investing In Her Future

At Georgia State, Lexie Newhouse (B.A. ’20) discovered a passion for business development and the start of a career.
Use Scan QR Code to copy link and share it
By Austin Birchell (B.A. '20)

Georgia State was always Lexie Newhouse’s first choice for college. She liked its location in downtown Atlanta, and a new degree program she thought was ahead of its time.

But still, she toured the Atlanta Campus five times before making her final decision.

“I was trying to make sure I’d considered all my options, but I kept finding myself right back here and I couldn’t be happier with my choice,” Newhouse said.

She was drawn to Georgia State by the Creative Media Industries Institute’s (CMII) Media Entrepreneurship concentration, a bachelor of interdisciplinary studies program that blends artistic passion with startup culture. 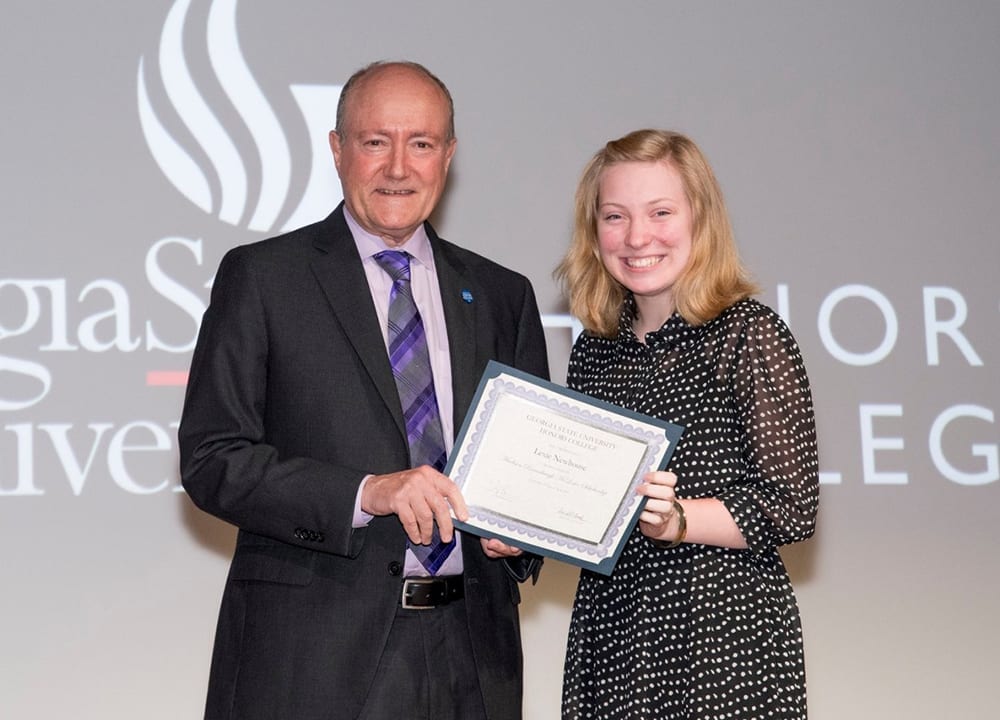 “It was the first thing that attracted me here,” Newhouse said. “I toured Georgia State when they were preparing to open the CMII building. I thought it would be really cool to be one of the first students to graduate with this degree and work in this building. No other university had such a future-focused curriculum for the degree.”

From being accepted into and working in the Honors College as a relations assistant and student ambassador, to walking on to the women’s golf team, working as a graphic design intern in Athletics and being inducted into the 1913 Society as a Presidential Ambassador, Newhouse has left her mark at Georgia State.

While she holds multiple positions on and off campus, her position at Invest Atlanta, the city of Atlanta’s economic development agency where she works in the Technology, Innovation and Entrepreneurship office, has perhaps had the most influence on her plans after graduation.

“I noticed that I was taking more entrepreneurship classes than media classes,” Newhouse said. “Mixing that with the interest I began to gain on the policy side of things, I think I really began to understand the role I wanted to fulfill when I leave Georgia State.”

Now, along with the rest of the graduating class of 2020, Newhouse faces an uncertain and unprecedented world. She considers herself blessed to have lined up a full-time job with Accenture starting this fall, but with an increasingly stagnant economy, she finds herself wondering if that is secure.

Wherever Newhouse finds herself in the coming months, she knows she wants to continue her education at Georgia State one day, and continue to work in innovation.

“At the end of the day, I want to continue being involved in the startup ecosystem,” Newhouse said. “Atlanta’s is really vibrant and I think there’s a lot of opportunity for better collaboration between universities and local government agencies. I want to help build the bridge that isn’t there quite yet.”

Not only has coronavirus affected Newhouse’s career path, but her story as a student, too. Saddened by the news she would no longer be able to use parts of campus like the Honors College, the Rialto Center or CMII’s technology rentals, see the people she’d grown close to over the past four years or walk in her commencement, Newhouse cannot help but recognize the privilege it has been to study at Georgia State.

“I know it was the responsible decision to close campus,” Newhouse said. “It only makes me more thankful for the experiences and relationships that I’ve had during my time at Georgia State.”

In her last semester, taking online Spanish and writing her Honors thesis on how the economic incentives provided by Invest Atlanta help startups and local businesses, she sees the value in those incentives like never before.

“We’ve seen some of Atlanta’s top startups emerge from the 2008 recession, and I know we’ll see that again after COVID-19,” she said. “Atlanta is resilient. Georgia State is resilient. That’s one of the main reasons I love organizations like Georgia State and Invest Atlanta so much. I’m so fortunate to be a part of this city.”