Despite Pandemic, Nursing Student Is Where He Wants to Be
Use Scan QR Code to copy link and share it
Caleb DeLong, a Georgia State University alumnus who will graduate from Georgia State's Perimeter College in May with his nursing degree, has seen the COVID-19 pandemic up close while working in a Rockdale County hospital emergency room.
By Rebecca Rakoczy

“I’ve seen the worst possible things and always dealt with it fine,” said DeLong, an emergency medical technician at Piedmont Rockdale Hospital and nursing student graduating in May from Georgia State University Perimeter College . “I don’t bring it home, and I perform well under intense amounts of pressure.” 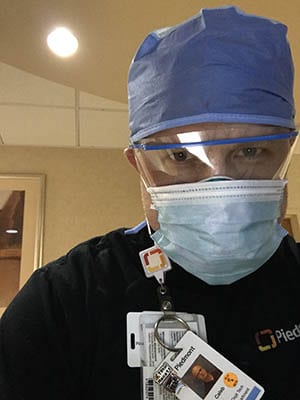 Caleb DeLong, a Georgia State University alumnus who will graduate from Georgia State’s Perimeter College in May with his nursing degree, has seen the COVID-19 pandemic up close while working in a Rockdale County hospital emergency room.

Then the COVID-19 pandemic hit.

DeLong, a graduate of Georgia State’s Andrew Young School of Policy Studies (B.S. ’18), was stunned when “dozens and dozens” of patients flooded the hospital emergency room, many testing positive for COVID-19 virus.

“Rockdale got hit pretty hard in the beginning,” he said. “We had an entire floor of COVID-19 patients at one time.”

He recounts one of the earliest days of the pandemic, when an elderly gentleman came into the ER struggling to breathe.

“His CT scan of his lungs showed that ground-glass opacity found in many of the CT scans of patients that have COVID-19,” DeLong said. “He soon would be intubated and placed on a ventilator. I told him to relax and slow down his breathing, but it wasn’t working. His lungs were filling with fluid. The doctor, the respiratory therapist and I were all sweating in our protective equipment, all of us in shock at what this virus could do.”

As of April 22, the Georgia Department of Health reported 144 cases of COVID-19 in Rockdale County, one of the geographically smallest counties in the state. Six COVID-19-related deaths of patients, ages 40 to 77, were reported as of that date.

DeLong is one of 66 Perimeter College nursing students who will graduate May 5. The changes the pandemic has wrought in the environment of health care have not been lost on him.

“My desire to be a nurse hasn’t changed, but this has challenged me,” he said. “I’ve seen someone in their 20s put on a ventilator. This virus doesn’t discriminate.”

As statewide shelter-in-place measures to “flatten the curve” of the virus were put in place, the challenge became finding a balance between providing good care and dealing with the fear in the community surrounding the virus, he said. The fear exists among health care professionals as well. He sees how the psychological effects of the virus play out daily for him and others in health care.

“A respiratory therapist in the ER wasn’t allowed to see her kids because her ex-husband fears she has been exposed to COVID,” he said. “My own doctor, who was one of the first to get the virus in the area, told me how she had to live in a tiny room in her home for weeks while she recovered. And when I go to the store before work in my scrubs, people avoid me. It’s like oil on water. I feel like a walking disease.” 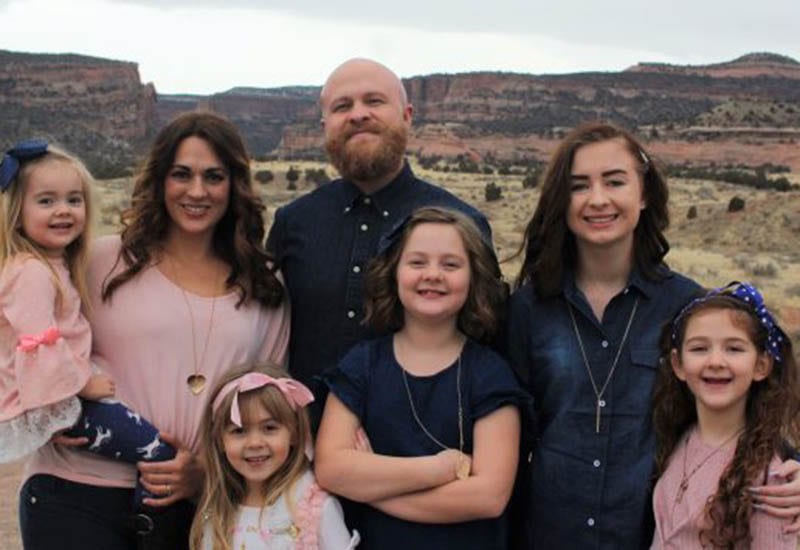 Caleb DeLong, a Georgia State University alumnus who will graduate from Georgia State’s Perimeter College in May with his nursing degree, is also a husband and father of five. He has seen the COVID-19 pandemic up close while working in a Rockdale County hospital emergency room.

Despite the fear of the virus, DeLong says the community overall has been kind and supportive.

“I don’t think I’ve paid for a meal in a while,” he said. “People are dropping off food at the hospital all the time.”

Like many health care workers, the 32-year-old husband and father of five young children lives with the concern he can be an asymptomatic carrier in the pandemic.

“It would kill me as a nurse and a father if I harmed someone by spreading this around,” he said. “My wife and I have discussed what to do if I did contract it. I’ll probably move into the garage. In the meantime, we’re all isolating ourselves from the rest of the (extended) family.”

“My desire has always been to help the most people I possibly could,” he said. “I thought working with public policy could do that.”

The Lure of the ER

But his life in the ER also held a certain attraction.

DeLong obtained his Emergency Medical Technician certification as an Army combat medic in the National Guard and won the Iron Medic award in combat medic school. Though he never saw combat, he has worked five years as an EMT at the Rockdale hospital while pursuing his bachelor’s degree.

“I always loved the adrenaline of the ER,” he said. “I was coming to the end of my degree program (at the Andrew Young School) and one of nurse practitioners (at the hospital) pulled me aside and said, ‘You do good work here. Why don’t you pursue a degree in the medical field?”’

Despite the COVID-19 pandemic, DeLong doesn’t think he would want to be anywhere else. He has been offered a nursing position at the hospital after graduating next week.

“Someday, I might get into public policy in the health-care level,” he said. “But right now, I love nursing and enjoy staying focused in a high-pressure situation. …  This is high stakes, but if you can walk away at the end of the day and say, what I did saved lives, that’s worth it. That will be my legacy.”