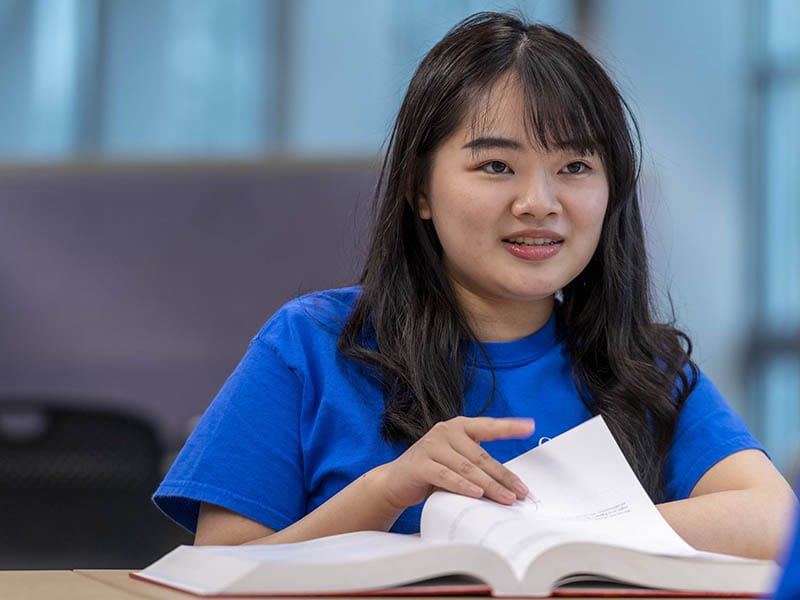 CLARKSTON, Ga.—When Yuqi Chen was growing up as one of three siblings in Chaozhou, a city in the southeastern province of Guangdong, China, her parents focused on more than her grades.

Chen, who will graduate from Georgia State University’s Perimeter College in May, recalls her dad’s response when she didn’t perform highly on class assignments in school.

What her father was more concerned with was how she treated people.

“My parents were more concerned about my heart.”

As it turns out, Chen is a 4.0 Honors College student at Perimeter who also is incredibly committed to helping others.

Chen is among this year’s semifinalists for the national Jack Kent Cooke Undergraduate Transfer Scholarship, which awards winners up to $40,000 per year for up to three years, making it the largest private scholarship for two-year and community college transfer students in the country. Winners are selected based on academic ability, persistence, leadership and service to others.

As an international student studying early childhood education at Perimeter, Chen has flourished. In addition to her full-time studies, she’s also a Supplemental Instruction Leader (peer tutor) and a language drill instructor for students studying Chinese on Perimeter’s Clarkston Campus.

Bateman explained that, although Chen is a student, she’s able to teach language classes based on her fluency in Chinese, a language identified by the U.S. Department of State, Bureau of Education and Cultural Affairs, as critically in demand. Because of this designation and a shortage of critical language instructors, Perimeter College, as well as other colleges and universities, can waive typical teacher requirements, such as having a college degree.

Bateman says that during the past year, Chen — through self-initiated recruitment efforts — has increased the number of Chinese classes on Clarkston Campus from one to three. Chen’s teaching style is engaging, organized, dedicated and dynamic, regularly including hands-on activities encompassing Chinese history and culture, said Bateman.

“I’ve observed her about three times in class, and every time she blows me away,” the associate professor said.

“Her students score top grades, as evaluated by a Georgia Tech examiner (professor), on their final written and oral exams,” Bateman said.

Chen enjoys what she’s accomplished in and outside the classroom. A big part of her extracurricular time is spent volunteering with the Tzu Chi Collegiate Association (TCCA), an international relief organization. Chen is vice president of the Atlanta TCCA, which includes student chapters on the campuses of Emory University and Georgia Tech. She will become president in May and is working to get a chapter established at Georgia State.

Over the past two years, she has logged 500 hours with TCCA, helping to coordinate and provide direct relief to hurricane victims in Texas and Florida and planning monthly visits to residents at an adult day center in Chamblee, where she leads students in engaging the center’s adults in activities such as calligraphy, singing and games.

In March, when universities started suspending classes due to the COVID-19 pandemic, Chen moved quickly to help fellow Tzu Chi and other international students at Emory University find alternate housing when they were asked to move out of the dorms.

“They (didn’t) know what to do, and they were scared,” Chen said, adding that Emory soon made accommodations for the students to stay on campus.

Now, through her involvement with Tzu Chi, Chen is helping to coordinate the distribution of 10,000 surgical masks to Atlanta-area hospitals dealing with the COVID-19 outbreak.

Annie Sun is a longtime Tzu Chi volunteer. She and her husband, Charlie, started the organization’s chapters at Emory University and Georgia Tech nine years ago. She said Chen represents the core values of Tzu Chi, which are to serve with compassion, gratitude, respect and love.

“She sets a very good example,” Annie Sun said of Chen. “Yuqi is very special, not everyone can be like her, she’s a very good seed.”

While attending Perimeter College, Chen has won multiple scholarships and a number of awards, including Georgia State University’s 2019 International Undergraduate Student of the Year honor.  She also has presented at several academic and research conferences, like the Georgia Collegiate Honors Council, and won a university-wide art competition. Chen is the current vice president for the Georgia Association of Educators student chapter.

Back home in Chaozhou, although not in college, Chen was equally busy. After graduating from high school, she ran an art studio, distributed imported goods, subleased properties and even helped to develop a documentary — among other entrepreneurial endeavors. Chen also thought about becoming a doctor and a psychologist, before deciding that teaching in the early education arena will be the best way to make a positive contribution in the world and honor her parents.

The announcement of this year’s Jack Kent Cooke scholarship winners is expected in April. Since 2002, the foundation has awarded 19 Perimeter students the scholarship.