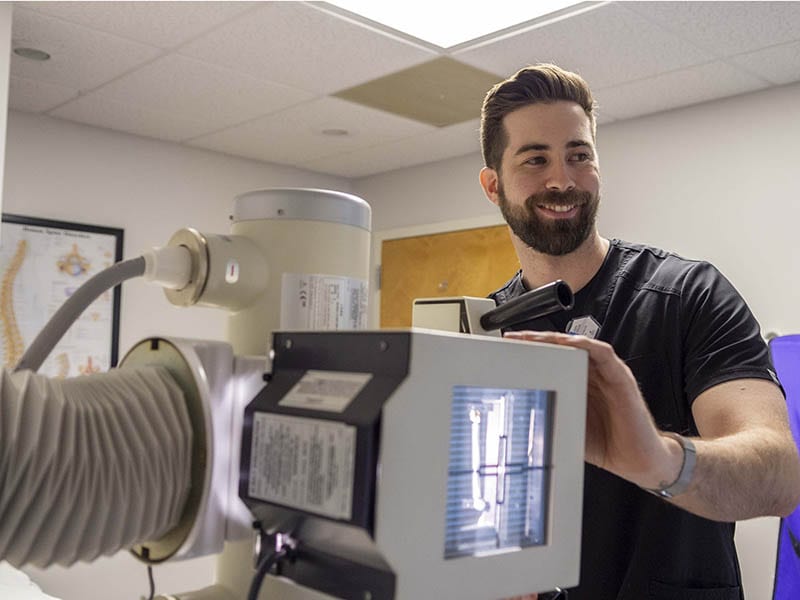 ATLANTA—Not even two weeks after graduating from radiologic technology school, Joseph Dunagan (above) slipped into his brand new, black medical scrubs and extra comfy tennis shoes, then showed up for his first day on the job at an Atlanta-area spine clinic.

Dunagan had not thought it would take long for him to find work. But his move from college to career astounded even him.

Dunagan received his clinical certification from the School of Radiologic Technology at Grady Health System July 17 and graduated Aug. 13 with an associate degree in radiologic technology from Georgia State University’s Perimeter College. He actually accepted a “rad tech” job offer on July 29, a couple of weeks before receiving his degree.

“I was very surprised at how soon the offer came, but I was glad because I couldn’t wait to start working,” Dunagan, 29, said.

Dunagan is not the only Perimeter rad tech graduate to experience a quick turn from college to career.

Radiologic technology is one of the fastest growing professions in the nation. At Perimeter, students such as Dunagan and Juliet Williams are flocking to it, thanks to partnerships that enable them to take their general education courses at Perimeter College and clinical training at either Grady Memorial Hospital or, as in Williams’ case, Emory Decatur Hospital School of Radiologic Technology. The associate degree and clinical training are required to work as a radiologic technologist. 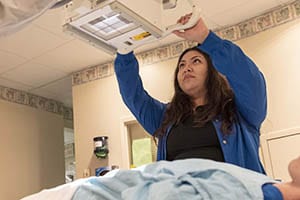 “I went into this field because it’s a marketable field,” said Williams, who graduated in August and began working full time at Concentra, a national provider of occupational health and urgent care services, a few weeks after graduating.

According to the U.S. Bureau of Labor Statistics (BLS), the radiologic tech field is projected to grow 9 percent faster than the average for all other occupations between 2018 and 2028, with the median pay about $61,000 per year. That’s largely because (as explained on the BLS website): “an aging baby-boom population will lead to probable increases in medical conditions, such as cancer and Alzheimer’s disease, which require imaging as a tool for making diagnoses. Radiologic and MRI technologists are needed to take those kinds of images.”

Perimeter College’s partnerships with Grady and with Emory Decatur are consistently graduating students to help meet that need.

From 2015 to 2019, an average of 23 students completed the program through Grady each year. An average of nearly 17 finished each year through Emory Decatur between 2014 and 2018. In 2019, 21 students graduated from Emory Decatur’s program.

Of the students graduating from the two programs every August, about half completed their 31 hours of classroom work at Perimeter College. For example, at Grady, between 2014 and 2018, Perimeter graduates represented 54 of 109 individuals completing the program. The numbers are similar at Emory Decatur.

The size of radiologic tech classes is intentionally limited. Each year, Emory Decatur receives 50 to 60 applicants for its rad tech program, Evans said. Of that number, 21-23 are accepted.

Evans said controlling enrollment allows the program to provide students a one-to-one learning opportunity with registered radiographers in all of the program’s clinical sites and to assess students on their interaction with actual patients – not just simulations.

In addition to providing benefits in student training, limited enrollment means participants will find employment opportunities when they graduate, she said.

Students such as Nitzia Ruiz, from the Emory Decatur program, graduate prepared to take their national registration exam and enter the workforce. The Grady and Emory Decatur programs boast a near 100 percent pass rate for students taking the American Registry of Radiologic Technologists test.

Ruiz, the first in her family to go to college, says she was drawn to the medical field as a child, initially thinking she’d become a doctor.

“I just enjoy helping those who are sick,” she said.

Like Dunagan and Williams, Ruiz graduated in August. She started working at Grady Memorial Hospital in November.

“There is a lot of time that you have to put in, a lot of sacrifice,” Ruiz, 23, said of the rigorous radiologic tech program, which requires students to take challenging classes such as anatomy and physics.