Jenny Pham, a Presidential Scholar in the Honors College majoring in political science, has been selected as Georgia State University’s 2020 Outstanding Student by the University System of Georgia Board of Regents.

Pham will be recognized with a proclamation during the Feb. 11 Board of Regents meeting and luncheon.

“It’s the greatest honor and recognition of the past four years of my life at Georgia State. I’m grateful to my family, friends and mentors who supported my aspirations—career-wise and academically,” she said.

Pham is a first-generation college student whose family immigrated to the United States from Vietnam when she was a child.

“My father and my uncles and aunts are all refugees from the Vietnam War,” Jenny said. “I grew up hearing stories of my dad’s early years in America, stories of economic hardships and racial discrimination. I also had the lived experiences as an immigrant and the child of a refugee. I hope that my narrative will motivate other first-generation, women and immigrant scholars to dream big and fight for their dreams.” 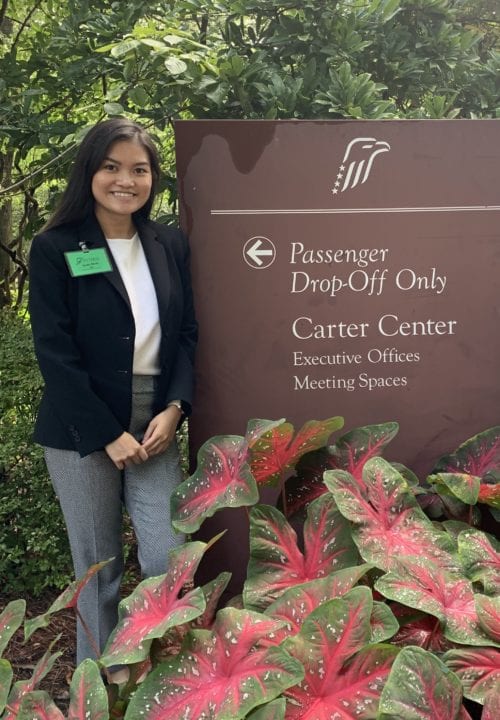 In addition to being a top scholar at the university, Pham is a research intern at The Carter Center and legislative aid to Georgia State Rep. Mike Glanton.

“When I worked at the Georgia State Capitol and researched the Child Citizenship Act of 2000, I increasingly saw the need for a global approach to resolving migration related issues,” she said.

During her sophomore year, Jenny was awarded the Erasmus + International Credit Mobility Grant by the European Union to study European Union law in Italy. She has competed on the university’s Model United Nations team and won awards at the national competition.

For almost three years, she has worked as a research assistant to Honors College Dean Larry Berman, analyzing the scientific and legal debates surrounding the use of chemical warfare—specifically Agent Orange during the Vietnam War—and conducting interviews with veterans who were exposed to Agent Orange.

“All of these experiences have enriched my time at Georgia State. They’re ways in which I can contribute to society through research and volunteerism,” she said.

Jenny has been a finalist for both the Marshall and Rhodes scholarships. Her goal is to lead the United Nations High Commissioner for Refugees (UNHCR) and to work on a global level to mitigate the impacts of climate-induced forced migration.

“I want to focus specifically on the global refugee population because they are the most vulnerable population in the world,” she said. “UNHCR is currently the leading intergovernmental organization on the refugee crisis.”