Inside The Legal Life of Ludacris

This fall, Georgia State University College of Law introduced the Entertainment, Sports and Media Law Certificate to prepare students to practice in Georgia’s growing entertainment industry. One of the certificate program’s first offerings is a course called The Legal Life of Ludacris, which filled up in a matter of minutes. It’s rare that a law school course goes viral, but it’s safe to say that this one did, and with good reason. In class, students in the Georgia State Law J.D. program sift through the contracts that shaped the Atlanta-based entertainer’s career, from his early days in radio to his rap albums to the Fast & Furious films franchise as well as his philanthropic contributions with The Ludacris Foundation..

The class is the brainchild of Professor Moraima “Mo” Ivory, who has practiced entertainment law for almost 25 years and has been a fan of Ludacris from his days as hip-hop radio personality Chris Lova Lova. Though, Ludacris’s relationship with Georgia State University started in the 90’s when he was an undergraduate studying music business. He left the program before he had the chance to finish after releasing his debut single “What’s Your Fantasy” and signing a record deal with Def Jam Records.

Ivory met Ludacris through working in the entertainment industry and says that she kept an eye on his career, because of his business acumen, professionalism and willingness to evolve. That’s something she knows all too well from her past as a radio host, CNN commentator and most recently, a media consultant for gubernatorial candidate Stacey Abrams. She brings her experience—and some of her own contracts– to create connections for students in the College of Law.

“With the already booming entertainment industry in Atlanta–sports, music, film, television and gaming–we felt it was important to create a new crop of legal professionals who could handle the business coming to Georgia,” Ivory said. “Since Georgia State Law is at the center of the city’s entertainment hub, we are positioned to provide information and resources for our students, legal professionals and those in our community interested in the entertainment industry.”

At the start of class, students discuss current legal cases or issues in the entertainment industry such as Taylor Swift not owning her masters, the Obamas trying to get a trademark for their entertainment company and a man suing rapper Cardi B for the use of his likeness on her 2016 album cover. Then, it’s time to role play. 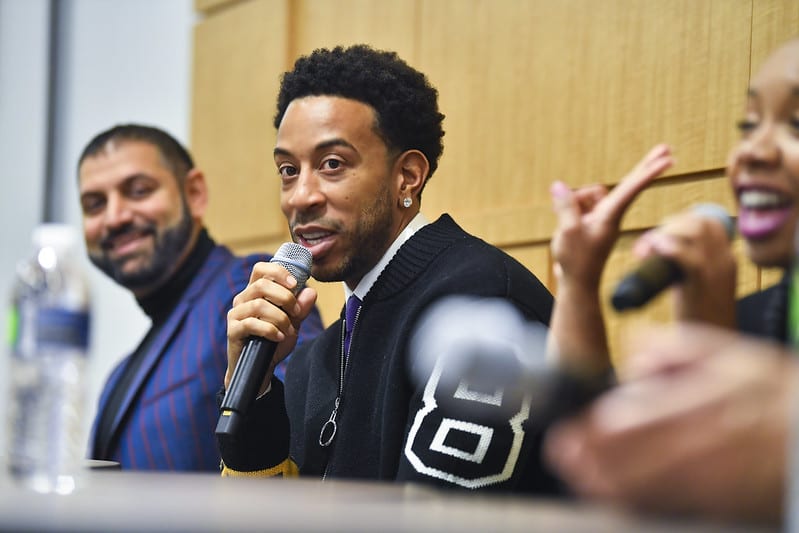 Ludacris served as a lunchtime panelist at the recent Intellectual Property master class.

Tonight, students are playing attorneys representing a radio station and talent to resolve a dispute about the meaning of works made for hire. Working through these types of legal issues equip students with skills that they can transfer to many areas of law practice, including: deal-making techniques, negotiating, copyrights, trademarks, publicity rights, endorsements, recording, television and film contracts, entrepreneurship and philanthropy.

“I never imagined that a class that was supposed to go for two hours and 45 minutes would run over,” Ivory said. “We find ourselves staying in class until after 9 p.m. because students are so interested in his career, the complexities of the deals he’s been in and the guest speakers.”

It takes a village to brand an artist, so in addition to role play, Ivory brings in those closest to Ludacris to discuss their roles in shaping his career. So far, Ludacris’ mom Roberta Shields, radio DJ Ryan Cameron, his business manager Jini Thornton, and one of his music managers, Jeffrey Dixon have visited the class.

During Dixon’s visit he revealed that he has been working with Ludacris on a handshake agreement for the last 19 years. He has been there through wins such as Ludacris’s Sprite endorsement and losses such as their Conjure Cognac venture. He does not recommend not having a contract to students, but says that Ludacris is an atypical client, not often found in the music industry. He adds that part of what has made him a successful manager is being willing to evolve as Atlanta and the industry has evolved.

“I learned from L.A. Reid that that you can’t want it more than the artist, or you’ll be miserable,” Dixon said to the class. “I want to be mentioned in history. I’m driven like this is my first job.”

This kind of drive is what motivated Ivory to propose the course to then College of Law dean, Wendy Hensel, in 2018. Atlanta is home to CNN, many Grammy Award-winning producers, five professional sports teams and the state-of-the-art Mercedes-Benz Stadium. The film industry alone contributed $2.7 billion in direct spending across the state in 2018, according to the Governor’s office.

“People are eager for this type of training, which before now was offered primarily in California and on the East Coast,” Hensel, who is now provost, said. “We’re bringing it to Atlanta, and the positive response has been overwhelming. I’m excited about the future.”

Students are also excited about the future. It’s only midway through the semester and Ovi Balaj is planning to use the lessons on contract negotiation to form his businesses. He says that his favorite part of the class has been the opportunity to ask experts questions and build his network.

“On one occasion, Ludacris’ attorney came and taught us key things to look for in contracts, and focused our attention on clauses that only lawyers with extensive experience could understand,” Balaj said. “If you are thinking about becoming an entertainment lawyer, these insights give you an edge when you get ready to practice.”

Racquel McGee, who is the president of the Sports & Entertainment Law Society and a graduate research assistant in the Entertainment, Sports and Media Law Initiative, shares that sentiment. McGee says that Cameron, who gave Ludacris his first job, provided her with invaluable insight for her career.

“He told us that entertainers want an attorney with whom ‘you laugh at the same jokes,’ McGee said. “I learned how important it is that an artist and that artist’s attorney are a perfect match.” 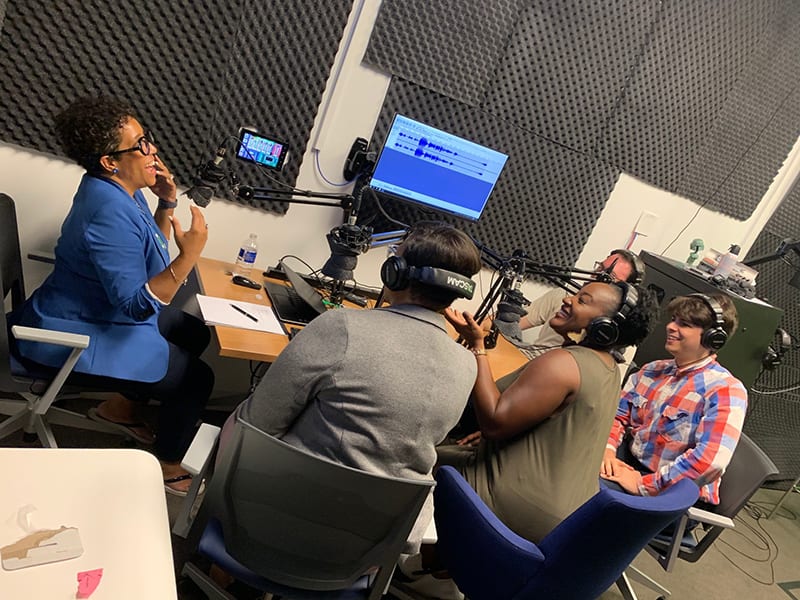 Professor Ivory and students recording an episode of “In the Mix.”

Ivory and students reflect on each week’s lessons on the class podcast, “In the Mix.” So far, they’ve done a deep dive into managerial agreements and radio-talent contract negotiations during the Podcast, reflecting on what the students have learned and highlights shared by the guest speakers.

In addition to The Legal Life of Ludacris, the certificate program hosts two large events every year where students and alumni get to hear from mover and shakers in all aspects of the entertainment industry. On November 16, 2019, they’re hosting an all-day Intellectual Property Master Class with the university’s Creative Media Industries Institute (CMII). During one of the many sessions and panels, artists will be able to ask lawyers their most pressing, content-related legal questions, and receive a response on the spot from a panel of entertainment attorneys.

Ivory’s goal is for students to be able to be the best advocates possible, no matter where life takes them.

“Success looks like students having a fundamental understanding of the legal principles and hands-on experience with issues creative clients deal with on a daily basis,” Ivory said. “This allows them to go into any law firm and negotiate and advocate for fair and equitable contacts, protection of intellectual property, fair and equal pay, and job opportunities for their clients.”