As a child, JenVon Cherry, a certifying official for veterans at Georgia State, suffered a tragic injury that causes unpredictable seizures. But she refuses to let her condition hold her back.

JenVon Cherry remembers her classmates screaming and hiding under their desks. Something unthinkable happened in her first-grade classroom. Without provocation, another student had stabbed her in the eye with a pencil.

“They just took me to the nurse, put gauze on my eye and sent me right back to class. No one called my parents or anything,” Cherry said. “If something like that happened now, it might have been on the news.” 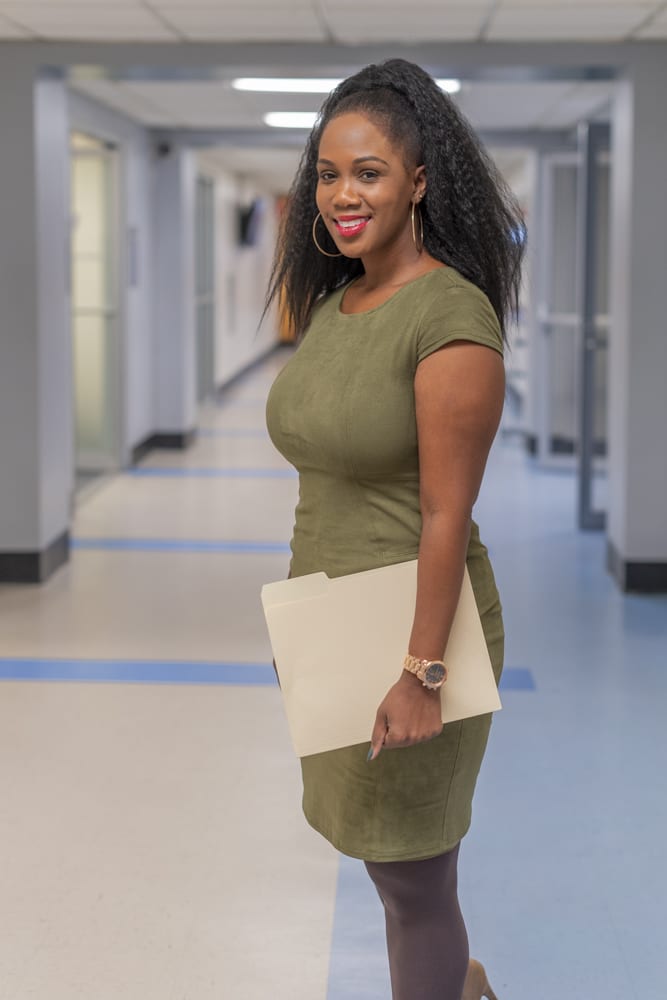 JenVon Cherry has overcome epilepsy and is now helping veteran students at Georgia State receive their benefits and assistance.

Cherry spent the rest of that day with her head wrapped in a bandage. As soon as she stepped off the school bus, her mother rushed her to the hospital. But doctors said Cherry was fine and sent her home.

Two weeks later, Cherry began convulsing while her mother cooked dinner. This time, the hospital admitted her, and she underwent nine hours of surgery. Doctors pulled a piece of pencil lead the length of a thumb out of her brain.

The surgeons presented the Cherry family with a difficult decision. They recommended more surgery to remove any remaining scar tissue. But looking at their daughter’s shaved head, the long scar running down her temple and her weak, motionless body, Cherry’s parents knew they couldn’t put her through any more procedures.

“Your father and I looked at each other and just said, ‘No,’” Cherry’s mom told her.

Cherry remained in the hospital for the next eight months and was eventually diagnosed with epilepsy, a neurological disorder characterized by erratic seizures.

Thirty years later, scar tissue lingers around the left part of Cherry’ brain, behind her eye, and the seizures continue. Still, she believes her parents made the right decision to avoid surgery, and she doesn’t harbor resentment.

“My best friend always asks me if I have spite for the boy who did it,” Cherry said. “If I’m being honest, I can’t say there’s any anger. Life’s a little too short to be angry.”

That child and his family moved away two weeks after the incident, and Cherry hasn’t seen or heard from him since.

After nearly a year in the hospital, Cherry came home. She started first grade over again, while her friends moved on. The school welcomed her back with a big sign on her classroom door, and Cherry made friends with her new, younger peers.

The transition back to school wasn’t easy. Cherry had to balance her sick days with unpredictable seizures. Her medication affected her memory, which meant she had to study twice as hard to remember half of the material in her classes. She had to be flexible and prepared for anything at any moment.

One of those moments came during her high school prom. Cherry began convulsing at dinner, and when she finally gained consciousness, the dance was over. She’d spent hours getting dolled up but missed almost the entire event.

When she started college, Cherry said it felt as though the whole world was against her. She had to study and work harder than her classmates, and she had to find rides to class because epilepsy prevents her from driving. But she persisted and earned her degree.

“Graduating college was huge for me,” she said. “I didn’t think it was going to be possible.”

Then came the challenge of pursuing a career. Cherry said she was fired twice due to her condition even though the companies hired her with knowledge of it.

Determined that her epilepsy wasn’t going to stop her, Cherry kept looking for work, confident the right opportunity was just around the corner.

She applied to more than 200 positions in her native South Carolina and one — on a leap of faith — in Georgia. When Cherry received a call from Georgia State University for an interview in Enrollment Services, she could hardly believe it. She made the trek to Atlanta and landed the position.

It meant putting South Carolina in the rearview mirror and making Atlanta her new home. It meant living on her own for the first time in her life. Cherry was a a ball of nerves, unsure of what the future held, but she found independence.

“I realized I had accomplished something I never thought I could: working and living on my own,” she said.

In the past, Cherry had viewed her condition as a weakness and something she had to hide at her job. But her colleagues assured her that epilepsy would never reduce the value of her work or her role on the team.

Today, she looks past the daily challenges of her unpredictable condition and focuses on the future. In her three years at Georgia State, Cherry has had seizures on the job, but her co-workers and managers have supported her. As an enrollment services assistant, she loved helping students work through their issues. As she doled out advice, she would also offer her support and friendship. Now, she serves as a veterans certifying official in the Office of Registration and Compliance, actively helping veteran students receive their benefits and assistance.

Working in Atlanta and travelling around the world with with friends in her free time, Cherry says she has finally become exactly who she wants to be.

“I don’t let my disability own me,” she said. “I own it, and I’m going to wear heels while doing it.”