Thaddeus and Natasha Johnson (Ed.D ’19) share a passion for justice. But that’s not all. Married 10 years, the couple also share the Andrew Young School of Policy Studies as their home away from home.

By Claire Miller and Sumar Deen

The Johnsons have lived in the U.S. and Jamaica and supported one another through years of work toward advanced degrees. Now, the two share a home in Georgia State’s Andrew Young School of Policy Studies — Thaddeus as a doctoral candidate and teaching assistant and Natasha as an instructor in the Department of Criminal Justice and Criminology. For a brief time, they even overlapped in their doctoral programs. 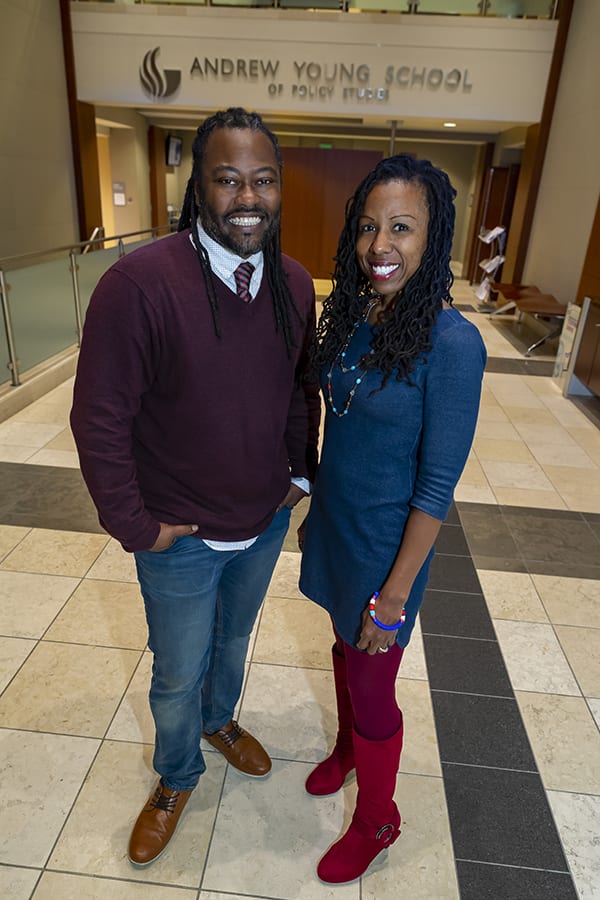 At first glance, the couple’s career experiences and research focuses look pretty different. Thaddeus has served as a departmental instructor and interim police captain in Memphis, Tenn. Natasha’s been a high school teacher and counselor in the U.S. and a curriculum developer in Spanish Town, Jamaica.

But there’s a lot of overlap in the content of their personal discussions and doctoral programs. The Johnsons could each philosophize all day long about the school-to-prison pipeline, zero-tolerance policies, the overcriminalization of children and demographic inequities.

“An appreciation for justice is something we share,” says Natasha. “We’re always looking at law, policy, equity and critical theory and thinking about what we can do about it — especially in a time in which technology gives us instant access to people of influence worldwide.”

Thaddeus has channeled 10 years’ experience in law enforcement into his doctoral research. As part of his work, which focuses on policing and education, Thaddeus is particularly interested in the school-to-prison pipeline. He’s studied the relationship between exclusionary discipline — a type of punishment that removes students from schools — and violent adult behavior among those students.

“Oftentimes, the student comes from a disadvantaged neighborhood,” he says. “In these communities, education represents one of the few legitimate ways out. So, we take this away from them and push them on the streets, and it serves as the proverbial last straw that sets them on a dangerous life course.”

Thaddeus presented his findings at Georgia State’s Three Minute Thesis competition earlier this year and placed third. A year before, Natasha had entered the same contest, placed second and received the People’s Choice Award. She’d used her Three Minute Thesis platform to discuss inequities between men and women in positions of workforce leadership.

“Justice, for me, is all about equity,” Natasha says. “It’s about leveling the playing field so everyone can have the same opportunities.”

The Johnsons’ commitment to social justice and advocacy isn’t limited to school discipline and workplace leadership. They pooled their research last June to publish “Deviance Among Physicians: Fraud, Violence, and the Power to Prescribe” with help from Thaddeus’ mentor, Christina Policastro (Ph.D. ’13), of the University of Tennessee-Chattanooga. It deals with medical industry scandals like healthcare fraud, sexual abuse, physical abuse and gratuitous surgeries, exploring the ways they’ve been policed.

“The problem is, it’s a topic that’s relatively understudied,” Thaddeus says. “Most people don’t know about all that goes on in the medical sphere.”

The Johnsons view their collaboration as an opportunity to shed light on medical industry injustices.

Now, they’re looking for more untapped lines of research, which will keep them busy. They’ve got conference presentations to plan, classes to teach and degrees to finish. Along the way, their support of one another will continue to prove invaluable.