From an intern in the ticket booth to walk-on to team captain, Remy Lazarus (B.A. ’20) has made the most of his opportunities.

Remy Lazarus is a captain on the bowl-bound Panthers’ football team. He leads the team with five pass breakups, he’s second on the team with 49 tackles and he had a big interception during the win over Furman. 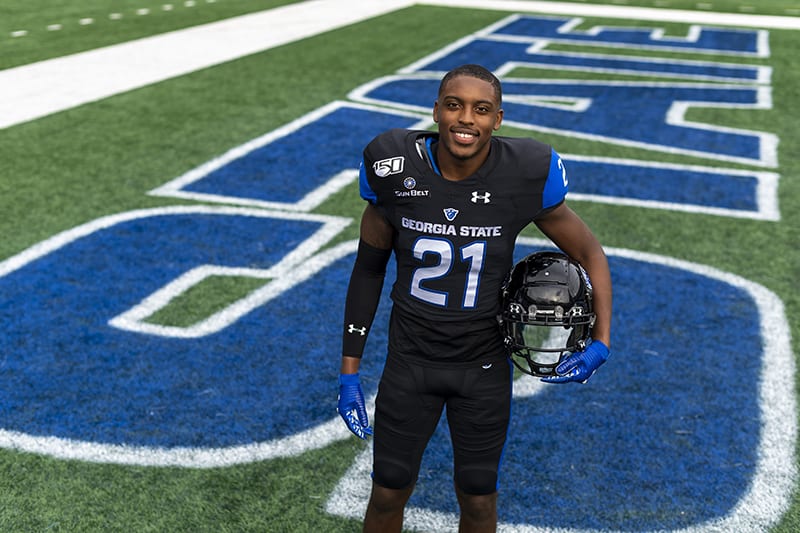 Not bad for a guy who started off his college football career in the ticket booth.

It was while he was working at the Georgia State ticket office that Lazarus figured he could make the right connections to fulfill his dream of suiting up for the Panthers.

A star defensive back at Kings Ridge Christian High School in Alpharetta, Ga., Lazarus earned a handful offers from Division II and Division III schools, but they weren’t where he saw himself.

“It wasn’t a pride thing. I had no issue playing a lower level of football. I just wanted to play,” Lazarus said. “But I decided to take the chance on Georgia State and see if it would work out.”

During registration, his parents pushed him to apply for an internship at the Georgia State ticket office. He would have to sell tickets, but he’d also set up the field on game days, help out in the locker room, and most important, spend time around the players and coaches.

“There was a light-bulb moment,” he said. “I realized that I could not only use this position to build my resume, but for a chance to get on the team.”

The following months were spent talking up his skills with the coaches whenever possible but being careful not to overstep.

Then the call came in February 2016 welcoming Lazarus to walk on.

“I was thankful for sure,” Lazarus said. “It didn’t matter what the coaches told me to do, I was going to do it.”

Lazarus earned a name for himself and the opportunity to travel with the team after the coaching staff saw how hard he played on the scout team.

When head coach Shawn Elliott arrived in 2017, he told the team it didn’t matter who was on scholarship or who was a walk-on — the best players were going to play.

“I took that as my opportunity,” Lazarus said.

During the 2017 season, Lazarus was a special teams standout and a back-up at safety.

When spring football came back around, Elliott told Lazarus it was time for him to earn the starting job.

“Coach Elliot told me, ‘You’re the next guy up, but if we can’t trust you, we can’t play you,’” Lazarus said. “I took that as a challenge and knew I had to earn it.”

Lazarus started the 2018 season and had 75 tackles, the second-most on the team.

Over the summer, Coach Elliott awarded Lazarus a scholarship and a team captaincy.

“I was happy to call my mom and tell her we didn’t have to worry about student loans anymore,” he said, laughing.

As graduation quickly approaches for Lazarus, he’s determined to be the best player he can be.

“I want to play at the next level, of course,” Lazarus said. “But I’m just focused on being a leader here and now, leading this team to a few more wins and getting us to a bowl game.”

Lazarus also hosts “The Remy Lazarus Show” every Thursday. He interviews players right after practice to give fans a behind-the-scenes look at Panther football.

One episode featured Lazarus breaking the news to teammate Terrance Dixon, a walk-on, that he had received a scholarship – something Lazarus experiened, too . The video appeared on ESPN’s “Gameday.”