Growing up in the sub-Saharan African nation of Uganda, Charlotte Dennison had monkeys in her yard and could see the shores of Lake Victoria from her house.

“Everything seemed like more of an adventure there,” she said.

Her father taught law at a Christian university in Mukono, a fast-growing town about an hour from Uganda’s capital city of Kampala. Her early memories are of energetic, bustling city streets, something she missed once her family moved back to the Savannah, Ga., just before her ninth-grade year.

“The first thing you see of America is the highway,” said Dennison, now a first-year Honors College student and a Class of 2023 Presidential Scholar. 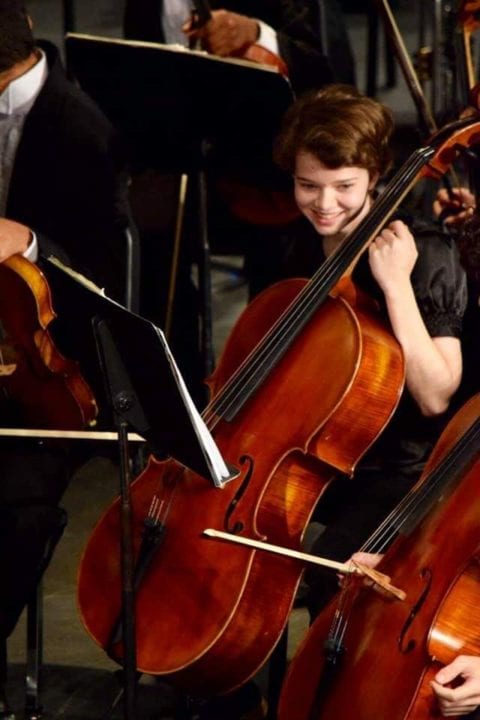 While it was sometimes difficult for Dennison to relate to her American peers once she returned to the U.S.—“I missed out on a lot of American culture,” she said—she found music to be a universal language. She took cello and piano lessons in Uganda and continued as a student at the Savannah Arts Academy.

“Music is so interesting in how everyone can connect with it and the different styles that speak to different people,” she said.

In addition to the pleasure of creating and playing, Dennison said she’s intrigued by the scientific aspect of music—specifically how it relates to memory. Her great-grandmother had Alzheimer’s disease, a progressive and degenerative brain disorder.

“She might not be able to remember anything for long periods of time,” Dennison said. “But she played violin when she was younger, and if you played something that she had played, she would remember it.”

Before enrolling at Georgia State, Dennison spent the summer shadowing a music therapist who worked with brain trauma patients. The experience solidified her desire to study music and neuroscience.

“I don’t know whether I’ll actually become a music therapist myself,” she said. “But I’m definitely interested in the research. I just believe there has to be a way for music, somehow, to heal and strengthen memory.”