Longtime Georgia State associate professor Malinda Snow talks about competing on the epic quiz show “College Bowl” in 1966 and defeating Princeton University in one of the biggest upsets in trivia game history.

In spring 1965, junior English major Malinda Snow heard the big news: Agnes Scott College had been asked to assemble a team to compete on the nation’s most popular quiz bowl TV program, “College Bowl.” When the call for tryouts came to campus, she thought, “I wonder if I could do that?”

She could and did. As team captain, Snow helped take down an all-male Princeton University team for a place in the annals of quiz show history.

But it hadn’t been easy. Agnes Scott took an early 100-60 lead, and Princeton clawed its way back. With 10 seconds left on the clock, the ladies were down by 15. Eight seconds later, Snow’s teammate Karen Gearreald buzzed in with the correct final answer to clinch the win by five points. As Agnes Scott’s first blind student, Gearreald had done it with no knowledge of what the scoreboard or clock showed.

In August, Snow began her 47th year as an associate professor in Georgia State’s English Department. It’s been five decades, but she still gets asked about her famous “College Bowl” stint.

How were you selected for Agnes Scott’s “College Bowl” team?

The faculty chose about 12 students to start. They wanted somebody who was quick enough with a buzzer, who was knowledgeable enough and who looked like she would be congenial in a group setting. We competed four at a time in a classroom, and they told us to strike the table if we knew the answer. Eventually, they whittled us down to one four-person team.

The preparation for the show sounds intense. You even rigged doorbells to simulate buzzers, right?

Yes. We started to practice at least once a week — maybe more — in the fall of 1965, and our coaches had high expectations. We also watched “College Bowl” every week, but since professional football was on at the same time, we had to go to WSB Studios to see the feed. We’d pile into someone’s Volkswagen and drive over there from campus every Sunday evening.

Competing on national TV must have amplified things. Were you nervous?

We weren’t really nervous. We were confident that we would do the best we could and that we were good. We got to the studios just after breakfast and played several practice rounds against Princeton before getting made up for TV.

How did you feel as an all-female team going up against an all-male Princeton team?

We were fine about it. They were pleasant guys — courteous, cheerful and good competitors. They were self-assured, but so were we. The gender thing wasn’t a big deal at all.

Were the questions solely academic?

No, there were some pop-culture topics, too. There were some questions about current songs and such and others about the content of college courses. I even remember getting a question about the Bobbsey Twins in one of the practice rounds before the show.

At the 5:28 mark of the video, Karen Gearreald seals the win — with just two seconds left on the clock — with the correct answer to “What were Balmung and Durendal?” A vintage commercial for a General Electric toaster oven follows the excitement.

You led in the beginning of the game until Princeton made a comeback. What were those final minutes like?

We’d gone back and forth so much. As I recall, it was just part of the rhythm of the contest.

What happened after the show?

It was a live show, and there were mostly no copies of it, so you did it, and then it was kind of over. As soon as we finished with “College Bowl,” we had to come back and take our winter quarter exams. Then we just got on with what we had to do to graduate.

What’s it been like getting asked about it again 50 years later?

Nothing really developed to make people even think about it until the tape turned up, and then people began to see it. It’s still one of the few videotapes of the program. Over the past year, people have been asking a lot about it, and I’ve actually been involved in two or three projects 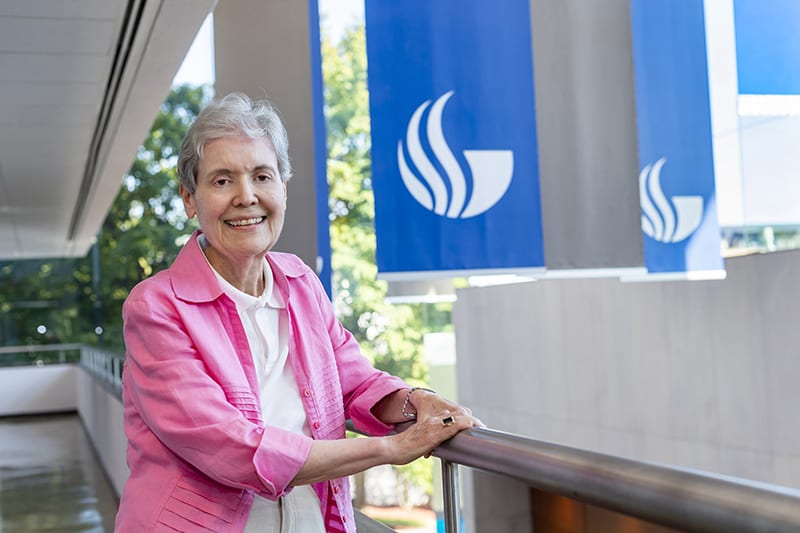 Malinda Snow, associate professor of English, is going into her 47th year at Georgia State. Photo by Carolyn Richardson.

Have you kept in touch with your three teammates?

I’ve seen Karen [Gearreald] at a couple of class reunions, and I email with Betty [Butler] from time to time. I hadn’t seen Katherine [Bell] in a long time when she passed away in the 1980s.

They’ve each enjoyed tremendous professional success. I’m sure none of this has surprised you.

It hasn’t surprised me at all. Karen spent most of her career as a civilian employee for the U.S. Navy, and Betty has done a lot of work on women’s health worldwide. Katherine got a doctorate in botany and was teaching at the University of Nevada, Las Vegas until her death.

You earned a master’s degree from Duke University, teaching there and at UNC-Wilmington before Georgia State. Have college students changed since you began instructing 18th-century British literature here in 1973?

They’re still just “college students.” I wouldn’t have stayed 47 years if it hadn’t been stimulating, pleasant and enjoyable. The students are open to being taught and participating in the process of learning. Ultimately, they respect and want an education. That’s what I find most heartening about Georgia State: Students here are, on the whole, quite conscientious, coming with serious intent and working at it to the best of their ability.

What’s kept you here all this time?

It’s a place where you can grow as much as you want. Not only has the school allowed me to grow, but it has also tolerated my own insistence on shaping my career the way I wanted to.

You know we have to ask: Are you a “Jeopardy” whiz?

I don’t actually watch it because of the time it airs, though I used to with my mother. I actually love watching cooking shows, like “The Great British Baking Show” and “A Chef’s Life.” I also enjoy gardening and Sacred Harp singing.