Chi-Hsiang “Eddy” Shih, from Taiwan, became the first respiratory therapy (RT) international exchange master’s degree graduate in May 2019. Shih and Li-Sheng “Kevin” Chen, who enrolls in this fall semester, are walking examples of the Byrdine F. Lewis College of Nursing and Health Professions RT program’s impact on millions of lives around the world. Hospital based therapists may see 15 or more patients in a single 12-hour shift. Georgia State produced more than 1,400 RTs in the program’s 50-year existence, potentially caring for more than 5 million patients.

Respiratory therapists work closely with physicians to care for patients with breathing disorders. In most parts of the world, RT is a subspecialty for physical therapists and physicians. In the U.S., the profession began in 1943 when Edwin R. Levine, MD, establishes a primitive inhalation therapy program in Chicago. Since then the RT profession has expanded and moved into Canada and other parts of Asia, such as Taiwan and India.

Thanks to a new student exchange agreement with Manipal University and Taipei Medical University, the RT program brings students from India and Taiwan, respectively, to pursue an integrated master’s degree in respiratory therapy. These students earn a dual degree with their home college and Georgia State. Four more students from Manipal in India plan to enroll during the coming year.

The exchange is a good deal for both the students and Georgia State University.

“As a foreign student, you can get a visa change to work [in the U.S.] for one-year post-graduation,” said Dr. Gardenhire. “[The graduates] take American healthcare back home to practice or teach.”

Shih appreciates what he learned from Georgia State and echoes the value of working short term in a U.S. hospital. 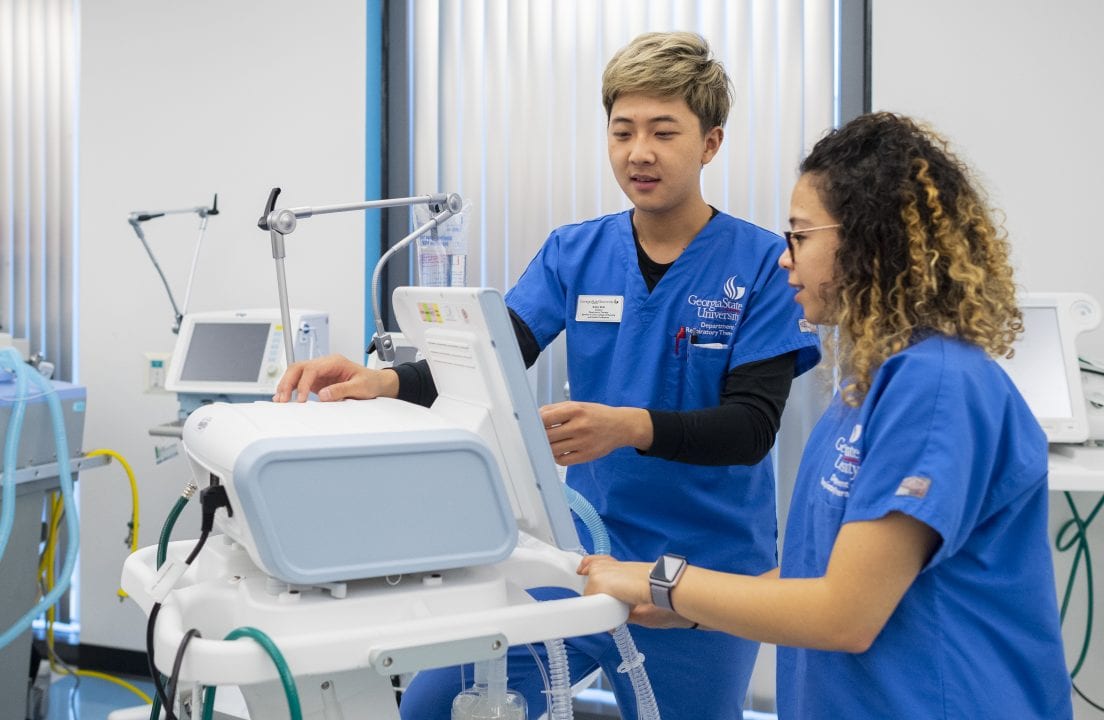 “Working in the largest hospital in Atlanta with one of the busiest ER throughout the U.S., I would like to bring that experience back to my country where RTs were sometimes overlooked,” he said.  “My long term goal is to continuously fill the gaps between clinical practice and research.”

The tiny, eight-faculty member department influences international RT education in other ways as well. After educating several hundred Saudi Arabian students through the traditional master’s degree program in the U.S., Dr. Gardenhire and his faculty are assisting Dar Al-Uloom University in Saudi Arabia in opening a respiratory therapy program, creating the curriculum and training faculty.

“Our faculty will travel to Riyadh over the next four years assisting in all facets of the program,” said Dr. Gardenhire. Dar Al-Uloom’s faculty will visit Georgia State to learn more about RT education. “The future is bright as these baccalaureate graduates will have the opportunity to complete a [master’s degree in RT] at Georgia State.”