Catherine Rakowiecki was a freshman, hiking the trails of Little River Falls in Alabama when she first heard about Georgia State University’s LEAD with Honors program.

During that trip and other outdoor adventures sponsored by Georgia State’s Touch the Earth, Rakowiecki got to know Cynthia Searcy, the Honors College faculty associate for innovative programs and director of LEAD with Honors.

“Cynthia was on all of those trips, and she would talk to us about [LEAD with Honors],” Rakowiecki said. “Those trips were the real reason I joined. The program just sounded like an interesting one.” 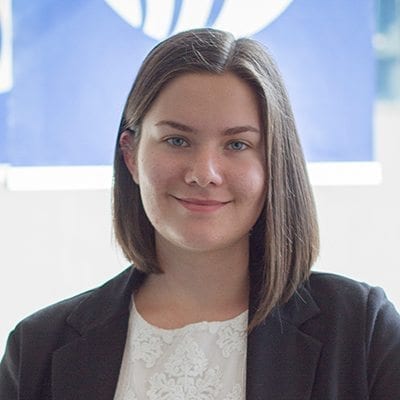 Now a senior graduating with a bachelor of arts in film and video, Rakowiecki is part of the inaugural class of Honors College students to complete the three-year LEAD with Honors program, which develops leadership and problem-solving skills among a cohort of students.

Along with seven other students in her class, Rakowiecki has completed a sequence of Honors seminars offering practical leadership experience. The inaugural class worked with Dr. Searcy to develop their own goals for the program.

These exchanges led to classes like Political Leadership, a discussion-based seminar Rakowiecki took her junior year that analyzed the leadership strategies discussed in famous philosophers’ writings. Rakowiecki said she bonded most with her LEAD cohort over discussions and debates on Aristotle’s works.

“My favorite part of the LEAD program has been our cohort,” she said. “I made friends in the dorms and everything, but the friendships that have carried on past that are in the LEAD program.”

Through LEAD with Honors, students also are connected with internships relevant to their major and career goals. As a film major, Rakowiecki spent a semester interning at Third Rail Studios working with television productions, reading scripts and helping around the office.

As part of her internship, Rakowiecki spent time behind-the-scenes on the production of NBC’s Good Girls.

“Video village is a part of the set where there’s a bunch of monitors for producers and directors to hang out, and that’s where I would be. A lot of the crew would hang out there too,” she laughed. “I remember I had a two-hour conversation with one of the lighting grips about how they raised chicks in their farm.”

Senior year, LEAD with Honors students have the option to complete a leadership practicum or a thesis project.

Dr. Searcy connected the LEAD cohort with the International Human Trafficking Institute (IHTI), which operates out of the Center for Civil and Human Rights. The non-profit serves as a connector for major players in ending human trafficking, such as the City of Atlanta or the Super Bowl Host Committee.

For her thesis, Rakowiecki created a Public Service Announcement (PSA) video on the prevalence of human trafficking in Atlanta.

“It first started with a lot of research on what makes a PSA effective—that’s the meat of the written part of my thesis,” she said. “But that was always the end goal of whatever thesis I was going to do; it was going to be a video.”

Rakowiecki created an entirely animated video, focused on deterring the demand that fuels human trafficking, that will be used in training sessions for IHTI volunteers and for social media campaigns.

She also submitted her video to the 2019 Georgia State Undergraduate Research Conference, where she won second place in the film display competition.

Rakowiecki graduates this spring with a certificate from the LEAD with Honors program that commemorates her leadership experience both in and out of the classroom. She says the program’s activities and internship opportunities have helped her nurture her leadership skills.

“Especially through this program, [Searcy] encourages us to go out and actually actively do leadership-style things,” Rakowiecki said. “All of these different experiences have contributed to me learning more about myself and what I do actually enjoy doing in terms of a career.”