Antoinette Charles, a senior majoring in neuroscience, has excelled as a student in the Honors College at Georgia State. She has conducted laboratory research and presented her findings at conferences across the country. She is president of the Beta Beta Beta Biological Honors Society.

Georgia State recently named Charles as its 2019 Outstanding Student because of her academic excellence, and she will represent the university at the University System of Georgia Board of Regent’s Academic Recognition Day on Feb. 12.

But outside of school, Charles is devoted to supporting underserved communities—in Atlanta and abroad.

“Both [communities] have similar issues in regards to lack of health care and inability to access basic hygiene necessities,” Charles said.

Charles is a founding member and current president of Global Brigades, a student organization that works to implement sustainable health systems across the world. Over the past three years, Charles has traveled with the group to Honduras and Nicaragua to provide health care to impoverished communities in those countries. According to Charles, Global Brigades has collected more than $150,000 and more than 5,000 basic hygiene products.

She continues her outreach locally as the president of Pads for Princesses, a student organization that provides homeless women in Atlanta with sanitary napkins and other necessities.

She credits her passion for service to her family and their roots in Haiti, one of the poorest countries in the Western hemisphere. Charles has witnessed the effects of homelessness and mental illness firsthand. She said she views her community service as an outlet to help those close to her who are affected by these issues. 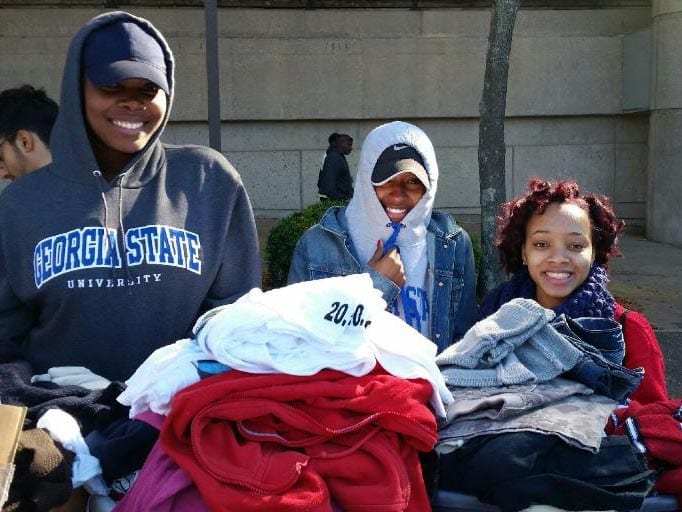 Antoinette Charles (far right) collects clothing for underserved communities in and around Atlanta.

“You walk past homeless people every single day, and you ask, ‘What can I do?’ And when you actually do something, you see they’re appreciative. You see that, even just having a conversation with them, they realize they’re human,” Charles said. “They’re human just like us, and you can do your part.”

Charles also serves as president of Beta Beta Beta Biological Honors Society. The organization exposes students to different careers provided by a biology degree. Members regularly attend conferences and visit different medical schools, and the organization has hosted speakers from the Centers for Disease Control and Prevention and the Atlanta Zoo.

Through her work, Charles has paved a way in a STEM field where a first generation Haitian-American like herself is historically underrepresented.

“You have to put in more work than anybody else, especially being an African-American female, which is even rarer in neuroscience. It’s that perseverance that’s really shaped my career at Georgia State,” she said.

Charles said the university’s Neuroscience Institute provides her with greater access to professors, department chairs and research opportunities. This past spring, she received a grant to present her research in San Diego, California at the Society for Neuroscience’s annual conference.

“Your hard work pays off… There weren’t a lot of African-American women there. I’m sort of opening that door for others—a pathway for others to enter in—is really inspiring,” she said.

Once she graduates from medical school, Charles plans to create an organization that promotes sustainable communities in Haiti with medical care and other resources.

“I feel like, instead of having a problem and complaining about it, the most important thing you can do is to be active and be the solution,” Charles said.