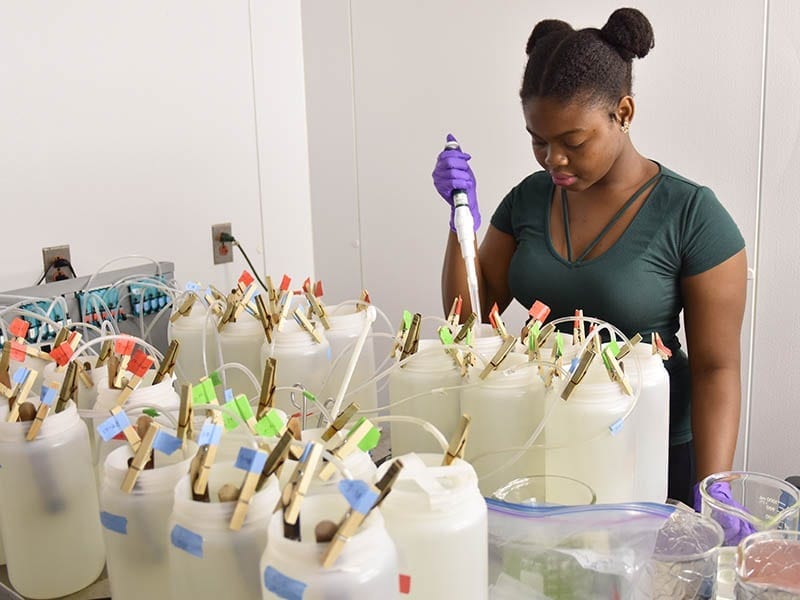 Micayla Shirley spent part of her summer hanging out with beluga whales, penguins, jellyfish and other ocean creatures. She even got a peck on the cheek from a sea lion as part of her participation in a 10-week, marine biology Research Experiences for Undergraduates (REU) program at the University of Connecticut in Groton and nearby Mystic Aquarium.

Program coordinators selected Shirley, a Phi Theta Kappa student at Georgia State University’s Perimeter College, and seven other university students from across the nation for the competitive, paid, research opportunity sponsored by the National Science Foundation.

Nearly 500 undergraduates applied for the REU. Shirley was the only two-year college student chosen.

“I was really excited about being accepted,” Shirley said, noting that she applied for five REUs.

The 18-year-old biology student developed her love for the ocean and animals as a child growing up in Jamaica. She moved to the U.S. two years ago with her mother, after graduating back home at age 16. A friend encouraged her to attend Perimeter College.

Shirley’s summer research paired her with a University of Connecticut professor and a graduate student. Together, they studied the effects of titanium dioxide nano particles — a substance found in sunscreen and other makeup products — on oyster larvae.

Shirley says the oysters exposed to titanium dioxide ate less than those unexposed. But, like a seasoned researcher, she cautions: “We can’t draw any strong conclusions. We would have to do multiple experiments to make sure that the results are consistent.”

Major says summer programs like the one at the University of Connecticut give students such as Shirley research experience they otherwise may not get while pursuing an associate degree. According to Major, Shirley and three other  LSAMP students from Perimeter participated in REUs this summer, including one at the University of Southern California. In previous years, Perimeter students have conducted research at Princeton, Boston University and the U.S. departments of Homeland Security and Agriculture, among other locations.

“Micayla Shirley is a high energy and extremely motivated student,” Cook said. “Any program would benefit from having her as an addition to their program.”

Another of Shirley’s involvements at Perimeter includes the TRIO Student Support Services program, which addresses the needs of first-generation students such as Shirley. Annalice Daniel, Shirley’s TRIO advisor, wasn’t surprised to learn that Shirley had been selected for the summer REU.

“Micayla’s self-discipline, drive and respect for others is what makes her the exemplary individual that both her faculty and friends admire her for,” Daniel said.

Shirley will graduate from Perimeter in May. She’s unsure where she’ll continue her biology studies, but says it’ll be near the ocean and that she’ll be closer to achieving her dream to become either an aquatic veterinarian or marine biologist.