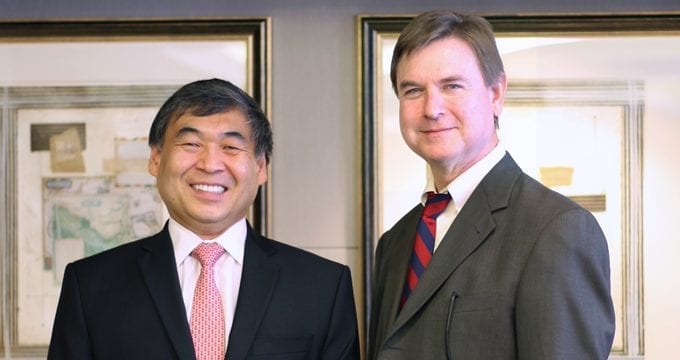 Shinji Morokuma (J.D. ’98), who was honored by the Georgia Supreme Court’s Commission on Dispute Resolution (GDOR) in recognition of his dedicated leadership as the executive director, with Doug Yarn, professor law.

Shinji Morokuma (J.D. ’98), who was honored by the Georgia Supreme Court’s Commission on Dispute Resolution (GDOR) in recognition of his dedicated leadership as the executive director, with Doug Yarn, professor law.[/caption]

Shinji Morokuma (J.D. ’98) was recently honored by the Georgia Supreme Court’s Commission on Dispute Resolution (GDOR) in recognition of his dedicated leadership as the executive director.

“Serving the commission and dispute resolution professionals has been a privilege,” Morokuma said. “I am grateful that I had the opportunity to work with so many brilliant and dedicated people in the service of our courts, and I hope that together we have helped to improve the administration of justice in Georgia for litigants, lawyers, and judges.”

Morokuma was the commission’s longest serving executive director, serving from 2005 through 2016. During his tenure, Shinji devoted himself to its mission to provide speedy, efficient, and inexpensive resolution of disputes and prosecutions, said Judge Charles Auslander III, chair of the Commission on Dispute Resolution.

“Shinji distinguished himself as the great ambassador for dispute resolution in the state of Georgia,” Judge Auslander said. “He is recognized statewide for his contributions to the field, which include establishing new court programs in areas of need, and the ethics and advisory opinions that he authored that help to guide the professionals that practice in our state.”

Morokuma became interested in alternative dispute resolution (ADR) while working as a summer associate at a big law firm where he saw large amounts of time and money being spent on litigation.

“ADR seemed to me a more sensible, productive, and human way to resolve lawsuits that were fundamentally human disputes,” he said. “So I focused my remaining years of law school on studying ADR with Professor Douglas H. Yarn. Because Georgia State Law was a pioneer in offering ADR instruction, I was able to work in my chosen field right out of law school.”

While at the College of Law, Morokuma worked as Yarn’s graduate research assistant.

“Shinji was one of my best students and one of my most productive graduate research assistants, and over the years, he has become a great friend,” Yarn said. “Shinji is humble to a fault; for example, he successfully shepherded the Georgia Office of Dispute Resolution through some of its most challenging times, and yet in a “history” he wrote on the request of the Commission, he does not mention himself even once. Nevertheless, he has shaped court-connected dispute resolution in Georgia as much as anyone.”

While with the commission, Morokuma oversaw more than 45 court alternative dispute resolution programs statewide and 2,000 registered neutrals. He also led the office during difficult financial times following the elimination of state appropriations support. During his tenure, the GODR moved from being administratively attached to the Supreme Court to operating more independently. This included establishing an administrative partnership with the Administrative Office of the Courts (AOC). In 2015, he assisted the Commission on Dispute Resolution with completing their first strategic plan and strategy map.

Morukuma’s reputation for leadership and excellence at the commission was well established.

“The lawyers, mediators and trainers with whom Shinji interacted on a daily basis were always quick to let me know about how they admired him,” Judge Auslander said. “But what stands out the most is the frequency that I would hear from judges from all levels of court, including the Georgia Court of Appeals and Supreme Court, about the respect they had for Shinji and their appreciation for him being such an asset to the judicial branch. I would characterize him as a great example of a true servant leader to the citizens of Georgia.”

Neuroscience Researcher Gets $1 Million To Study Visual Pathways Across Species