The Georgia State University Singers perform a haunting arrangement of a Bob Dylan classic on “The Walking Dead.”

Their wait was over the Sunday before Halloween.

In the second episode of this season’s “The Walking Dead,” the handpicked members of the Georgia State University Singers performed, acapella, a moving arrangement of Bob Dylan’s “Don’t Think Twice It’s All Right.” 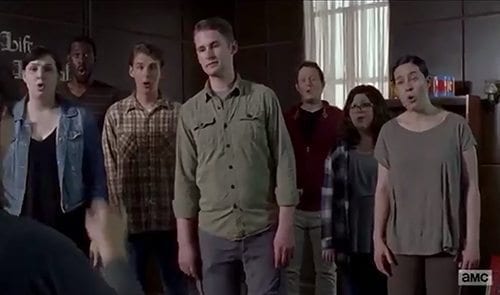 “It was amazing,” said Joseph. “I was so proud of them. They did such a great job, and sang so beautifully.”

Joseph said she received a call last spring from a casting agent for students to participate in an episode of “The Walking Dead.”

Eight singers were selected for the performance based on their musicianship, vocal ability, professionalism and work ethic. They portrayed a choir of the “Kingdom,” a settlement of zombie apocalypse survivors introduced this season.

Zayreton Slaton, an undergraduate music major, arranged the version of Dylan’s song specifically for the episode, providing a backdrop for Carol, a character struggling with her emotions as survivor.

Graduate music major Taylor Conley became the lead vocalist of the group, which spent all day filming toward the end of the spring semester.

Their performance was kept tightly under wraps.

“The students had to sign a ‘silence clause,’ a contract that said that they weren’t allowed to tell anyone about it,” said Joseph, who oversees the 50-member choir. “When they went in for filming, they were stripped of their cell phone and couldn’t take pictures or post on social media.”

She was delighted that the ensemble maintained professionalism, even if they might have been bursting at the seams to share the news.

“We’re preparing students to get gigs like this in the professional world, so I love seeing them doing this,” Joseph said.

The choir performs all over the world, and Joseph frequently gets calls asking for students who can perform in various roles.

“We get calls from casting agents and pop musicians all the time,” Joseph said.