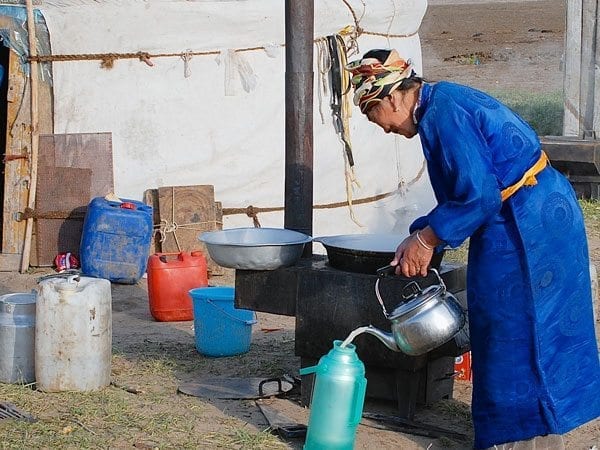 While practicing medicine early in his career, Erdenekhuu “Egi” Nansalmaa felt a calling to teach and realized he had greater healing to do.

“You can be a good doctor and heal lots of people,” said Dr. Nansalmaa, who treated trauma patients and performed orthopedic surgeries from 1997 until 2000 at the National Trauma and Orthopedic Research Center in Ulaanbaatar, Mongolia.

But he decided that treating individual patients was not enough.

“I devoted myself to public health because I thought I could help and serve many more people,” he said.

Nansalmaa wanted to improve education for new physicians and advocate for stronger health care policies in Mongolia. Along the way, his mission took him in front of national television cameras and finally to the office of dean at one of his homeland’s leading public universities.

But first, Nansalmaa went back to school to earn advanced degrees in medicine and public administration. In 2011, he earned his Master of Public Health degree in health management and policy from the School of Public Health at Georgia State University through the prestigious Fulbright scholar program.

When Nansalmaa returned to Mongolia, he was met with many obstacles. Despite the country’s transition away from socialism in the 1990s, doctors’ salaries remained meager and hospitals struggled to find resources, Nansalmaa recalled.

“It was very difficult,” he said. “The doctors had to wash their hands with cold water because there was not hot water.”

One of Nansalmaa’s successes in broadening Mongolia’s understanding and support of public health was his creation of a broadcast television program. The “120/80 Health Program” features health professionals who are experts on various issues from maternal health care to cancer treatment in a talk show format.

“In Mongolia, people don’t trust hospitals,” Nansalmaa said. “We wanted to change people’s behavior by giving them more information. We also wanted to change doctors’ and health professionals’ attitudes by showing them who is doing a good job.”

Nansalmaa hosted the show for a year and a half but relinquished the role to focus on his growing workload as Dean for the Division of Medical Education Policy and Management at the Mongolian National University of Medical Sciences.

His challenge now is to make health care education in Mongolia more engaging for students—“Not just lectures,” he said—and measured more by competency than completion of hours.

Nansalmaa said his hope is that a stronger, better prepared public health system will help his homeland tackle its most critical health challenges. Chief among them is air pollution in the capital city of Ulaanbaatar.

The city is ringed by mountains and contains a mix of modern buildings and nomadic housing, known as yurts. In the wintertime, which typically runs from October to March, yurt dwellers burn coal for heating and cooking. Over the years, the concentration of smoke within the city has become more and more dense—researchers consistently have ranked Ulaanbaater among the worse cities for air quality—leading to greater instances of allergies, lung and heart disease, and cancer.

“Not only can you see the pollution, you can taste it,” Nansalmaa said. The government has instituted a program to give cleaner stoves to nomadic families, but the implementation has been slow.

“If we don’t strengthen our public health system, we will have lots of patients. Hospitals will be rich—and busy, too,” Nansalmaa said. But the underlying health problems will remain.