On the Front Lines

Georgia State scientists are joining the race to unravel how the new coronavirus operates — and find effective treatments.
by Jennifer Rainey Marquez 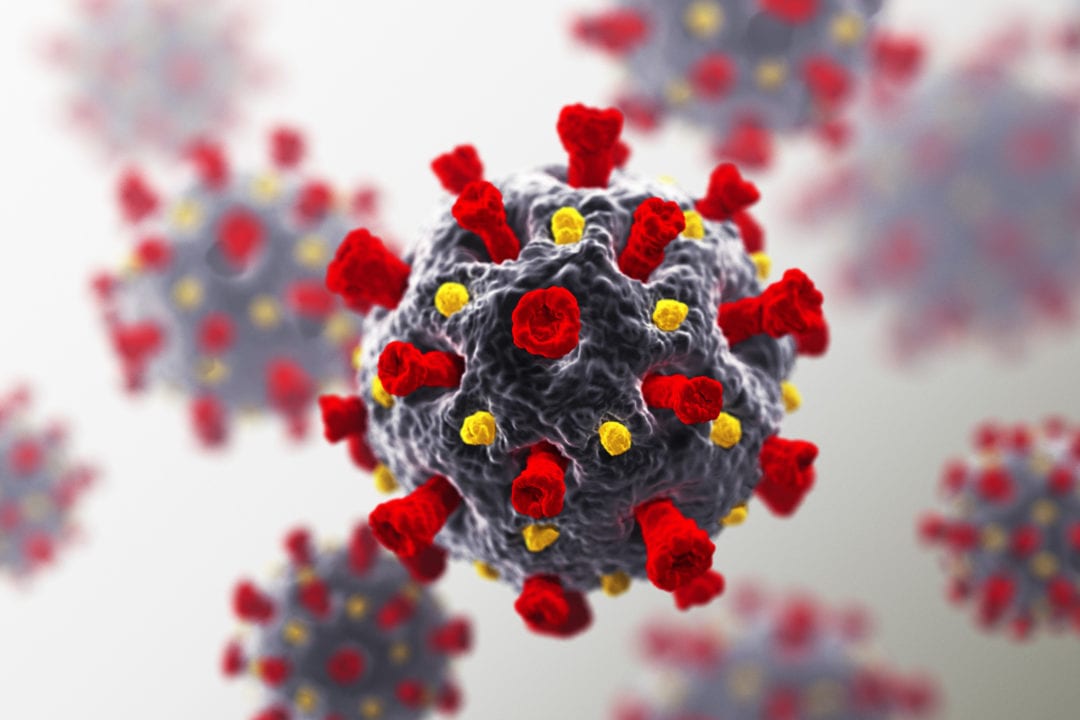 Schools closed. Workers logging in remotely. Streets empty. Businesses shuttered. The coronavirus pandemic is upending daily life throughout the world, and one of the biggest unknowns is “for how long?”

The answer to that question depends on a number of factors, including how quickly scientists can learn more about how the virus, known as SARS-CoV-2, spreads — and how to stop it. At Georgia State, researchers have joined this urgent search for answers.

Christopher Basler, a world-renowned leader in the study of emerging viruses and professor in the Institute for Biomedical Sciences, has spent the past 20 years focused on another viral adversary: Ebola. Now he’s applying what he’s learned to SARS-CoV-2.

Like all viruses, SARS-CoV-2 spreads by replicating its genetic code inside your body. Once a person is infected, the virus hijacks certain cells. These cells then spit out instructions to stifle your body’s immune system and produce copies of the virus. Antibiotics, which target bacteria, don’t work against viruses like SARS-CoV-2. Instead, scientists must create and test antiviral drugs that can interfere with the replication process. 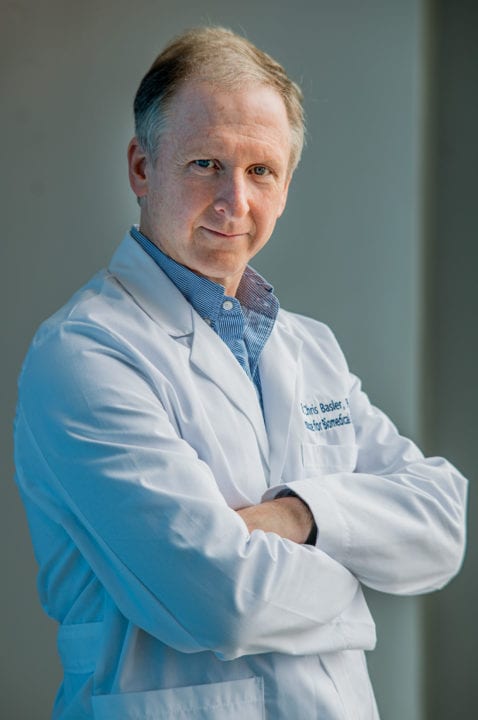 Christopher Basler, professor in the Institute for Biomedical Sciences

In 2018, Basler and his team screened 200,000 small molecule compounds in the hopes of identifying one or more that could interfere with the Ebola virus’s ability to reproduce inside the body. They identified 56 that impeded virus activity while showing limited toxicity to human cells, and of those, three were particularly potent against Ebola. One — benzoquinoline — also showed antiviral activity against other viruses, including the highly fatal Marburg virus and the Zika virus.

Basler has applied for funding to repeat this large-scale screening for compounds that could work against SARS-CoV-2, in collaboration with scientists at Sanford Burnham Medical Discovery Institute in California. He’s also testing compounds that have already been shown to quash other viruses to study their effects against the new coronavirus.

“The hope is that this could be a form of early-stage drug discovery,” says Basler, who is also founding director of the Center for Microbial Pathogenesis and a Georgia Research Alliance eminent scholar. “The prospect of developing drugs is a fairly long road, so the sooner you begin the better off you are.”

If Basler identifies compounds that may work as active ingredients in SARS-CoV-2 medications, the next step would be collaborating with medicinal chemists to develop the optimal formula. Then the drug would be studied in animals to determine how safe and effective it is against the virus.

He’s also planning to work with colleagues in the School of Public Health — associate professor Lisa Casanova and professor Gerardo Chowell — to better understand how well the virus survives in the environment and how sensitive it is to various disinfection procedures. Basler says this would have implications for how SARS-CoV-2 is transmitted and its potential to persist in homes or healthcare settings.

“We plan to employ mathematical models to investigate the role of environmental characteristics on the transmission dynamics of SARS-CoV-2 in different settings,” says Chowell, a mathematical epidemiologist who is also producing forecasts of the epidemic’s trajectory. “We want to study the extent to which changes in the environment could drive the course of the pandemic the next few months.”

The good news, says Basler, is the work that scientists have already done on Ebola, SARS and MERS has better prepared us for the current pandemic.

“In particular, the past research on SARS and MERS puts us in a much better position to respond to SARS-CoV-2 than we would be in otherwise,” he says. “These are all coronaviruses that come from animal sources and occasionally find their ways into people. Even prior Ebola-related research enhances our ability to respond.”

There are many fundamental questions that remain unanswered about this virus,” says Mukesh Kumar, a virologist and assistant professor of biology. “Two of the biggest things we need to better understand: How is the virus transmitted between individuals, and how is it interacting with cells inside the body?” 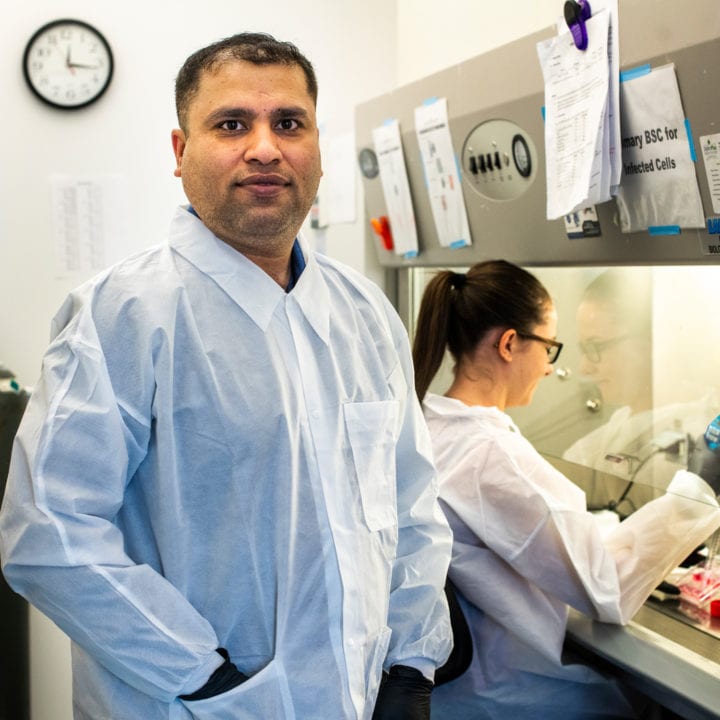 To learn more about how SARS-CoV-2 spreads, Kumar is studying how it’s transmitted in animals. He hopes to develop an effective animal model for the disease in order to learn more about how long it takes for the virus to travel between hosts, how long it can survive outside the body and whether it can be transmitted via stool or in the air even if hosts are kept at a distance. He also hopes to determine how long the contagious period lasts after a host is infected.

“We’re looking at, how can we block transmission therapeutically or by any other means? There are many available drugs that may not treat the disease but could reduce the chances of transmission,” says Kumar. “If you could prescribe an existing drug that could stop the spread of the disease, even to people who aren’t yet experiencing symptoms that would be a game changer.”

Developing an animal model will also be important for testing vaccines and therapeutics, as well as better understanding how the disease takes hold in the body, says Kumar, who has extensive experience developing and using animal models to study other pathogenic viruses.

“Once the lungs are infected, we can find out which cells are being impacted and which receptors the virus is binding to,” says Kumar. “As soon as you have that information, then you can direct research to fight it. At this point, we have no data, and we need an animal model to collect it.

“Georgia State has a great facility and we can do animal work here. Most other universities don’t have the ability to do that, but they can collaborate with us and we can help them test tools and therapeutics.”

Among those he is collaborating with are Georgia State scientists. He is planning to test a set of contrast imaging dyes developed by Jenny Yang, Regents’ Professor of Chemistry and associate director of the Center for Diagnostics and Therapeutics, to address urgent needs for early detection of the virus. The dyes potentially offer significantly improved sensitivity and resolution to accurately capture signs of lung infection in patients.

“We know coronavirus causes lung fibrosis that can currently only be detected at late stage by clinical CT scans,” says Yang. “We would like to apply our technology to enable clinicians to detect infection — SARS-CoV-2 hiding inside the lung — early.”

The technology can be used in live animal subjects to test effective drug candidates, and is expected to allow doctors to monitor how patients respond to treatment, a crucial step in clinical trials for newly developed drugs.

Kumar is also testing whether a simple glucose meter could be adapted to detect the presence of the virus. This technology, developed by chemistry professor Suri Iyer, has already been successful at detecting influenza, and Iyer is hoping it could be used as a rapid point-of-care test for SARS-CoV-2.

“If a rapid diagnostic test were available, it would relieve a significant burden on an overwhelmed healthcare system, which is why we are adapting our existing diagnostic platforms — which detects influenza viruses in less than 15 minutes — to meet this immediate need,” says Iyer. “The test is designed to indicate a patient’s viral concentration, which would allow clinicians to triage patients according to severity and determine when it is safe to release patients from quarantine.”