The researchers tested the drug as part of a project to screen FDA-approved medications for their potential use against SARS-CoV-2. They have made the paper publicly available for the global research and healthcare community on the preprint website bioRxiv.

“Drug repurposing is the fastest way to get a treatment for SARS-CoV-2 because it’s already been established that these medicines are safe to use in humans,” said Mukesh Kumar, lead author of the study and assistant professor of biology.

Like all viruses, SARS-CoV-2 cannot reproduce on its own. Instead it uses host cell proteins to manufacture copies of itself. 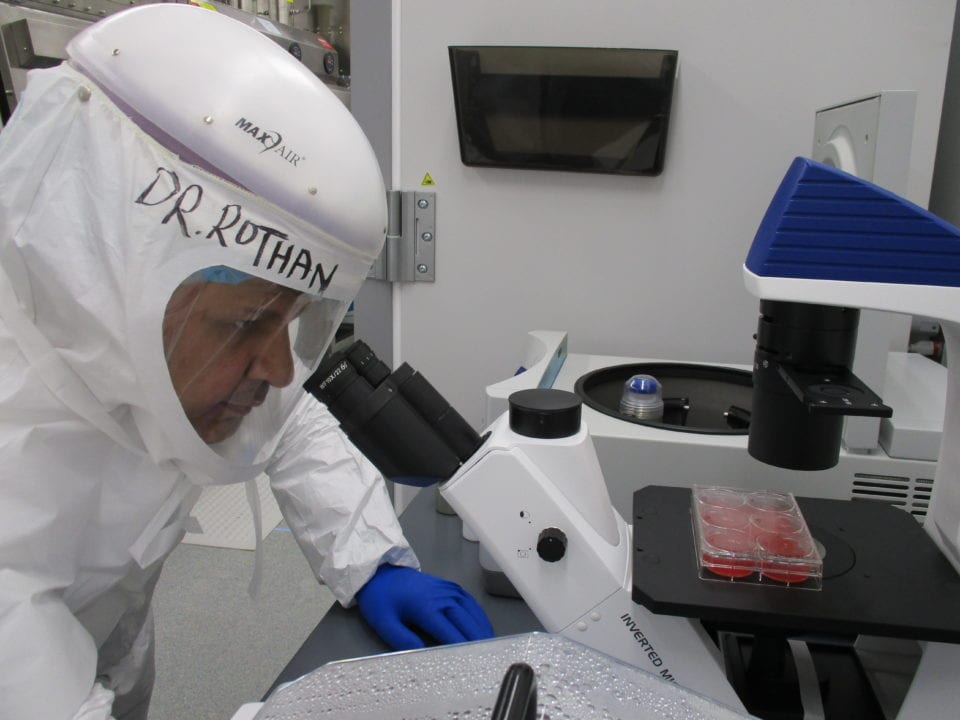 Hussin Rothan, post-doctoral researcher at Georgia State and co-author of the study, at work in the lab.

“Effective drugs need to interfere with this replication process, shutting down the virus’s ability to proliferate inside the host,” said Hussin Rothan, a post-doctoral researcher at Georgia State and co-author of the study.

In the preliminary study, human cells infected with the virus were treated with auranofin. Within 48 hours of treatment, the amount of virus within the cells dropped by 95 percent. Treatment also resulted in significant reduction of coronavirus-induced inflammation.

Auranofin also dramatically reduced the expression of cytokines — signaling proteins that draw immune cells to the site of infection— caused by SARS-CoV-2. Normally, the immune system works by fighting off invading pathogens and repairing damage to the body’s tissues. But many coronavirus-infected patients who die do so because of something called a “cytokine storm,” in which the body’s immune response spirals out of control, killing healthy tissue and leading to organ failure.

“This shows that the drug not only could inhibit replication of SARS-CoV-2, mitigating the infection, but also reduce the associated lung damage that often leads to severe respiratory distress and even death,” Kumar said.

Auranofin is a chemical compound containing gold particles that was approved by the FDA in 1985 to treat rheumatoid arthritis. Gold compounds have been known to have anti-inflammatory properties for nearly a century, and the precious metal has been used in medicine since ancient times. More recently, scientists have explored gold compounds as effective treatments for HIV, cancer, neurodegenerative disorders and parasitic and bacterial infections.

Kumar and his team plan to test the drug in animal models to learn more about how it affects infection and illness, and whether it is effective in treating the disease.

Kumar is a virologist and immunologist with expertise in the studies of RNA virus/host interactions. Kumar’s major area of research interest is to identify novel therapeutic targets and diagnostic biomarkers for emerging infectious diseases, which include COVID-19, West Nile virus encephalitis and Zika virus-associated neurological disease. His research involves studying how SARS-CoV-2, causative agent of COVID-19, is transmitted in animals in order to better understand how the virus spreads and how it takes hold in the body.