Wrestling with the Legacy of Eugenics

Wrestling with the Legacy of Eugenics

Professor and legal historian Paul Lombardo on the continued legal and ethical significance of the American eugenics movement.
Use Scan QR Code to copy link and share it
Interview by Jennifer Rainey Marquez

A century ago, the U.S. Supreme Court handed down a decision that legal scholars generally consider to be among the worst in its history. In the landmark case, Buck v. Bell, the court affirmed that states had the right to forcibly sterilize “feebleminded and socially inadequate” people to prevent them from having children. The decision bolstered America’s burgeoning eugenics movement, which proclaimed to improve humanity through selective breeding. In ruling against Carrie Buck, a young woman residing in a Virginia state mental institution, Justice Oliver Wendell Holmes, Jr., famously wrote “three generations of imbeciles are enough.”

That phrase is echoed in the title of Georgia State legal historian Paul Lombardo’s 2008 book, “Three Generations, No Imbeciles,” the first fully documented account of the Buck case. The work revealed how Buck was misrepresented in court and detailed how the decision influenced public attitudes and the law.

“Most people think that eugenics is something from the distant past, but it has come back into the public conversation in a big way in the last 30 years,” says Lombardo, Regents’ Professor and Bobby Lee Cook Professor of Law. “We’re still wrestling with questions about how we might manipulate heredity and how those impulses might mirror what the eugenics movement was driven by.”

This month, “Three Generations, No Imbeciles” is being re-released with a new afterword that identifies the role the Buck story plays in abortion laws. We spoke with Lombardo about why this nearly 100-year-old case continues to resonate today.

Many people today have a limited understanding of the eugenics movement. Can you talk about its legal significance?

I’m a legal historian, and my focus has been trying to excavate and explicate the laws that were passed that relied on eugenic ideology. There are the sterilization laws, like the one highlighted in Buck v. Bell. There are the so-called racial integrity laws, which prohibited interracial marriage. There were also immigration laws. In 1924, the same year that the Virginia statute allowing sterilization was enacted, there was a national law that prohibited immigration by large groups of people from Eastern and Southern Europe. The eugenics movement generated a number of laws that impacted not only people with disabilities but also other groups.

You say that in the past 30 years, eugenics has moved back into the public conversation. Why?

In the 1990s, two major events prompted this conversation to reemerge. One was the commencement of the Human Genome Project, which aimed to map the complete set of human genes. By the late 1990s, this project was beginning to reach its milestones and raising a lot of questions about the ethics of genetic testing and genetic engineering. The second event was the 50th anniversary of the end of the Holocaust and the Nuremburg trials. The Nazis’ embrace of eugenics through every measure from sterilization to death camps has drawn a great deal of historical attention. Conversations today about how we treat people based on things like disabilities, race, gender or sexual orientation are all tied to eugenics and how it played out in both the U.S. and countries like Nazi Germany. 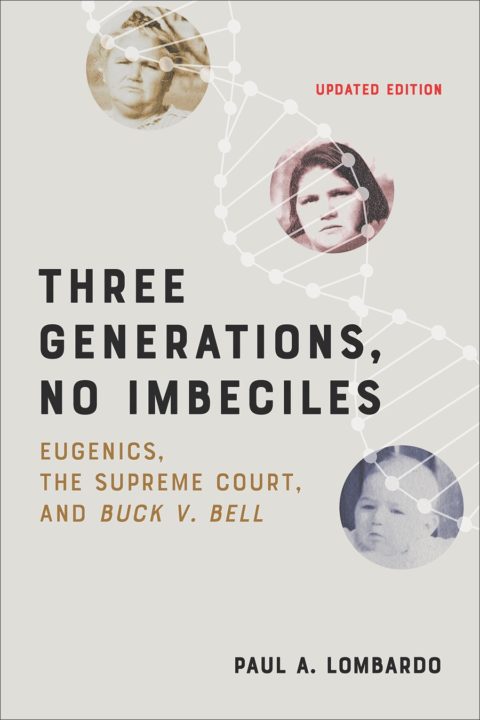 The book includes new discussion of how Buck relates to reproductive rights. Can you talk about those connections?

The debate over abortion and birth control and who is fit to be a parent has been a century-long discussion in this country. In the 1800s, America passed laws forbidding people with epilepsy to marry. There were laws passed saying you can’t have children if you have a disability.

Although sterilization laws were later used dramatically against women, they were initially focused primarily on men who were involved in same-sex relationships and charged with “crimes against nature.” The chief complaint was essentially, “don’t let those people have children because they’ll turn out just like them.” The same argument was made to justify compulsory sterilization of incarcerated people, a practice that continues to this day.

These laws raise two fundamental questions: Who gets to decide whether you become a parent? And who gets to decide what is done — or not done — to your body? The question of whether the government can or should control your body and its reproductive functions is one of the main questions raised by eugenics history, and it’s one we’re still struggling with.

You have criticized Supreme Court Justice Clarence Thomas for his claim that the founders of the eugenics movement in America were really trying to justify the use of abortion. Is there merit to that argument?

Some people believe that the eugenics movement leaders were all closeted abortionists, but history shows that is false. Advocacy for abortion by the birth control movement and Margaret Sanger, who was a known supporter of eugenics, did not begin early in the 20th century. While many people in the eugenics movement were in favor of birth control, there were also many against it, and almost no one leading the movement between 1900 and roughly the beginning of World War II endorsed abortion. In fact, you could characterize them as pro-life because they used a lot of the same language used by the pro-life movement today.

What about the implications for laws regarding genetic testing or genetic manipulation?

We will continue to see these questions raised as new technologies emerge, whether it’s prenatal genetic testing or CRISPR gene editing. There will continue to be, and there should be, conversations about the potential benefits and drawbacks, such as how the use of technologies could lead to a devaluing of certain people.

As a society, we still exhibit dramatic prejudice towards people with disabilities. That’s clearly been on display during the pandemic. In the eugenics movement, some people would say those who were ill, old or had medical vulnerabilities were “better off dead,” and we still hear echoes of that argument. However, it’s important to understand that not every scientific advancement has a direct line to eugenics.

That brings up another issue, which is vaccine mandates and arguments over individual liberty versus government action to pursue “the common good.”

What is the balance between notions of physical autonomy and notions of common good? That has come up again and again during the pandemic. Interestingly, there has been a great deal of language borrowed by the anti-vaccine movement from the pro-choice movement around the notion of “my body, my choice.”

However, legally you must determine whether there is a difference between forcible vaccination and making it a condition of, say, employment or getting on an airplane. The metaphors that we use, publicly and politically, need to be evaluated based on those distinctions. If the hurricane is raging and you want to have a parade down Main Street, your legal right to free assembly might disappear in that emergency. Our legal reaction would likely be different if basic rights were curtailed every time it threatened to rain.

What’s the current state of the eugenics movement? Has it truly ended?

If you’re talking about a well-organized and well-funded public campaign that reflected flawed notions of heredity branded as “eugenics,” then the answer is yes. But the laws passed by the eugenics movement were designed by opportunistic supporters who capitalized on ancient prejudices. Bigotry against people because of their race, disability, poverty or gender has always been with us, and it continues to be with us. And that’s why these issues still loom large in our national discourse.

Many famous Americans were known eugenicists. How should we consider them — and this Supreme Court case — today?

No one in the country escaped the reach of these ideas, and when we point the historical finger, we should remember that there are an infinite number of targets. People have mixed motives, some of which are laudable while others are condemnable. Many U.S. Presidents signed laws that were aligned with the eugenics movement or endorsed the movement. Teddy Roosevelt was one of the biggest proponents of eugenics. The public health movement was initially infused with eugenic thinking.

We can even look back at the Supreme Court opinion in Buck with a quantum of charity. The Court can certainly be faulted for the illogic and cruelty of its decisions, but we can’t expect it to focus on evidence not in the record it receives. The Justices had to make a decision based only on what they knew, while I’ve made a career out of demonstrating what they didn’t know in some cases.

The lesson of history is that we can’t escape the fact that our knowledge and understanding is limited and comes to us through blinders based on our biases and experiences. That’s why we should have some measure of humility — particularly when we’re deciding how other people’s lives should work or who gets to become a parent.