The Science Behind Staying Sharp as We Age

The Science Behind Staying Sharp as We Age

A new book by associate professor Vonetta Dotson explains how to help keep your brain in fighting shape throughout your life.
Use Scan QR Code to copy link and share it
Interview by Noelle Toumey Reetz

For many people, middle age arrives with some minor mental slip-ups. These “senior moments” are universal experiences that come with aging — and typically harmless. The Centers for Disease Control says one in nine adults ages 45 or older report at least occasional confusion or memory loss. But how do you know when these occurrences are normal? And how can you protect against more serious cognitive issues as you get older?

“The aging process looks different for different people. But generally, you can think of your brain like a house. If you take care of it, you can maintain a house for decades,” says Vonetta Dotson, associate professor of psychology and gerontology, whose new book Keep Your Wits About You: The Science of Brain Maintenance as You Age comes out next month. “But if you neglect it, you’re more likely to have problems over time.”

Dotson says scientific advances like functional magnetic resonance imaging (fMRI) are allowing researchers to gain new knowledge of the most complex organ in the human body — and identify ways to protect it. Here, she discusses some of the latest research in this growing field.

What does it mean to have a healthy brain?

It’s about being able to perform physical tasks and mental tasks, regulate our emotions, maintain our memory and cognitive abilities. All of that requires having healthy brain structure with good blood flow, with brain cells intact and communicating efficiently with each other. A combination of biological, environmental and other factors affects our brain health, but in general if we give our brain the right care, we’re less likely to have significant problems as we age. The “right care” means staying physically, mentally and socially active; eating a healthy diet; getting good sleep; and managing medical and mental health conditions.

How do you know if your brain is healthy? Should you get tested if you’re concerned about your dementia risk or you’ve been having a lot of senior moments?

In general, it’s best to talk to your doctor if you’re worried. Some warning signs that you might need to see a professional include:

If you experience these signs, it’s best to ask for a referral to a neuropsychologist, a specialist in the relationship between the brain and behavior. 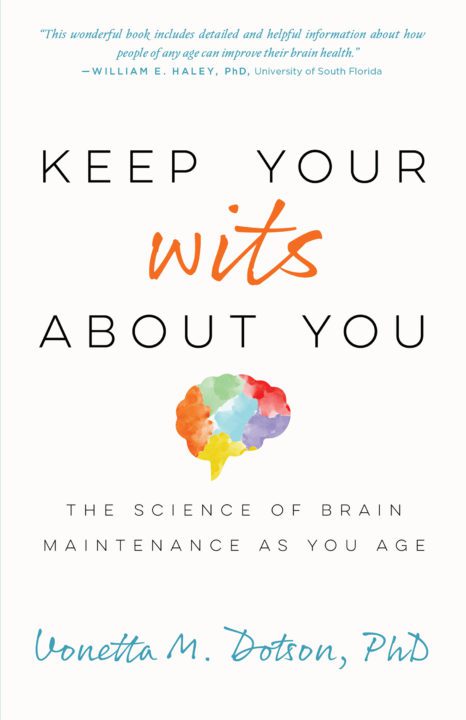 “Everyone has some power to take control of their brain health,” says Dotson.

Can good brain health strategies really offer the possibility of slowing the progression of dementia or Alzheimer’s disease — or even preventing it?

Since we don’t yet have a cure for Alzheimer’s disease or other types of dementia, prevention is our best bet. It’s possible to reduce a person’s risk of developing these conditions with a healthy lifestyle, which is what the book is all about. Healthy habits can allow our brain to withstand some of the normal changes that happen with aging and some of the problems that we might be genetically predisposed to develop.

Our behavior throughout our life affects how our brain ages, in the same way that our behavior throughout life affects our physical health as we grow older. A number of recent studies show that midlife and even childhood health conditions predict brain health in older adulthood. This is especially true for heart disease and conditions that increase the risk for heart disease, such as high blood pressure, diabetes and obesity. This means we need to maintain healthy behaviors throughout our life to lower our risk for Alzheimer’s disease and other types of brain degeneration as we age.

I find that knowledge empowering because it means that there is a lot under our control. Even if you have difficulty accessing healthcare — for example, you’re in a rural area or have low socioeconomic status — everyone has some power to take control of their brain health.

What is the top thing you can do to maintain a healthy brain?

If there’s a fountain of youth, it’s exercise. That’s because in addition to the physical changes we see, working out directly counters some of the negative effects of aging inside the brain. These are changes we can see using neuroimaging, such as fMRI scans. For example, exercise can increase the size of different parts of the brain. It improves blood flow in the brain and communication between different parts of the brain, which is necessary for brain cells to function well. What’s exciting is that the parts of the brain that tend to grow as we become physically active are the same areas that tend to shrink as we get older. That means exercise can in some ways reverse signs of aging in the brain.

Exercise also increases production of brain-derived neurotrophic factor (BDNF), which is a chemical that is important for the health and survival of brain cells. It reduces neuroinflammation, and we know that chronic inflammation can cause problems for brain health.

Sleep is really a game-changer when it comes to brain health. It’s a tough one for many people because we want to fit so much into the day, but sleep is vital to all aspects of our health. This is not just about sleeping a certain number of hours but having sufficient good quality sleep that is deep and restful.

We know that sleep affects almost every system in the body, including the brain. Sleep affects how brain cells communicate with each other, so it’s essential for our ability to form and maintain brain pathways. Getting insufficient sleep or having disrupted sleep is linked to a smaller hippocampus, thinning of the cerebral cortex and a reduced ability to form new brain cells.

Some exciting new research shows that sleep functions like a rinse cycle. During sleep, cerebrospinal fluid (the clear liquid that surrounds the brain and spinal cord) clears the brain of toxic waste, including toxins that are linked to Alzheimer’s disease. This is probably the reason why studies show that people with chronically poor sleep are at greater risk for Alzheimer’s disease.

What are some other lifestyle factors that can influence brain health?

Nutrition is also critical. What keeps our body healthy is also what keeps our mind sharp. A brain-healthy diet is very similar to a heart-healthy diet. For example, research shows that trans fats not only affect your heart, but they can also permeate brain cells, altering their ability to communicate. Over time, this can lead to problems such as cognitive impairment and depression.

Another key to keeping your brain healthy is to challenge it in a variety of ways. You can’t expect to just do more of the same activity and still get a benefit. Like cross-training for physical fitness, we get the most benefit when we engage in a variety of brain-healthy behaviors, and we need to keep it fresh. If you’ve been playing Sudoku for a while, mix it up with other hobbies that challenge your brain.

Your recent research is focused on disparities in brain health. Why is this so critical to understand?

We need to know more about how different cultural and social environments can contribute to brain changes throughout the course of life. For example, vascular depression results from damage to mood circuits in the brain due to vascular diseases, which are diseases that affect blood circulation. It’s more common in older, Black adults, likely because there’s a health disparity with vascular disease.

We have an ongoing project that’s testing an exercise intervention in this population to see whether it can change subjects’ brain health. We will be doing brain imaging, cognitive testing and mood assessments both before and after the intervention. We will also be looking for changing markers of inflammation in the blood, since we know that chronic inflammation is also tied to vascular disease. We expect this type of depression to be very responsive to exercise.

It seems that there are strong links between aging and depression. What have scientists learned about the connection?

It’s fascinating how some of the changes that happen in the aging brain overlap with some of the changes that we see in the brains of patients with depression. The area of the brain that is most affected by aging is the frontal lobes, especially an area called the prefrontal cortex. As we age, this region tends to get smaller and the connections between the prefrontal cortex and other parts of the brain gets weaker.

We see the same thing in people who are depressed. Decades of research has shown us that depression is linked to structural and functional changes in a network of brain regions that are also affected by the aging process. Both aging and depression are also associated with inflammation in the brain, with decreases in BDNF and with damage to white matter, the part of brain cells that is covered by myelin, which speeds up nerve impulses and connects regions.

Does depression raise your risk for developing cognitive problems?

Research from my lab and from many others does indeed show that depressed older adults have more brain changes, such as volume loss, compared to younger people who are depressed or older people who are not depressed. There is also a link between depression and dementia. During my postdoctoral fellowship, I conducted research that showed that having a history of depression, especially multiple episodes of depression, increases the risk for dementia.

Using neuropsychology and brain imaging, we are working to understand how depression might present differently in younger people versus older people. Depression in older adults is associated with more cognitive problems than depression in young adults. There can be more problems with memory, multitasking, attention and mental speed. Older adults with depression can also have more difficulty performing everyday activities, such as cooking or managing appointments and finances.

We’re also discovering how changes in the brain are linked to different patterns of symptoms in depression. For example, symptoms like sadness, lack of motivation or sleep problems could be caused by changes in the brain’s white matter. Theycould also be linked to reduced blood flow or inflammation. Mapping and connecting different biological changes to different types of symptoms is allowing us to improve treatment.

Based on the current medical model, doctors tend to prescribe the same depression treatment, usually medication, regardless of the person’s symptom profile. But if we start to understand how different treatments affect different neurobiological mechanisms and how those mechanisms relate to specific depressive symptoms, we can choose treatments that target each person’s symptom profile.