ROAD AHEAD
Elizabeth Weaver II (B.S.’05, M.S.’09), associate director of the Brains & Behavior Program of the Neuroscience Institute and an Alumni Association 40 Under 40 honoree, is helping raise awareness of the growing threat posed by long COVID-19 and the community of patients rallying to push for research and treatment options.
Written by Michael Davis (B.A. ’03)

Elizabeth Weaver II (B.S.’05, M.S.’09), associate director of the Brains & Behavior Focus Area of the Neuroscience Institute and an Alumni Association 40 Under 40 honoree, is helping raise awareness of the growing threat posed by long COVID and the community of patients rallying to push for research and treatment.

“Within a year, I saw 12 doctors across all kinds of specialties,” Weaver says. None of them were able to give her answers.

An athlete in high school who played on school and travel basketball and soccer teams that won state championships, and an active adult who enjoyed Ultimate Frisbee with co-workers, Weaver tried to push through the fatigue. It only made her symptoms worse, leading to crashes that left her unable to get out of bed for days.

“For the first five years, I didn’t understand what was wrong,” Weaver says. “I once went for a long walk with a friend, and by the time I got home I totally collapsed and was in the hospital for two days.”

In 2015, Weaver was finally diagnosed with myalgic encephalomyelitis/chronic fatigue syndrome (ME/CFS), described by the Centers for Disease Control and Prevention as a “disabling and complex illness” affecting between 836,000 and 2.5 million Americans. An estimated 90 percent of people with the condition are undiagnosed.

And if it sounds anything like what you’ve heard about long COVID — the fatigue, the crashing, the seemingly bizarre and unrelated constellation of symptoms — it’s because there’s a striking similarity.

With a better understanding of her illness, Weaver sought out other people like her who were living with ME/CFS. She found support groups, and patient-led research groups advocating on their own behalf.

“The people I met are just the most amazing and supportive advocates I’ve met here in Atlanta,” she says. “It was this peer-to-peer health advice that has really changed the trajectory of my illness.”

As she was learning more about her illness, a documentary about ME/CFS, “Forgotten Plague,” debuted on Amazon Prime. Weaver struck up a friendship with the documentary’s co-director Ryan Prior, a CNN journalist at the time who’s been battling ME/CFS since high school.

A Georgia native who studied English and international affairs at the University of Georgia, Prior went on to write for the Daily Beast, USA Today and CNN. A health and science journalist, he has a knack for telling personal stories about people working to change things for the better.

His own health struggles started in high school in Warner Robins, Ga. He was a driven student and athlete before something invaded his body, setting off what was eventually diagnosed as ME/CFS.

“I was a cross-country runner, a soccer player, taking Advanced Placement classes and president of the student council,” says Prior, now 32. “And I came home one day and slept 16 hours. I did that over and over, and I wasn’t getting better.”

Though he still has occasional flareups that sideline him for a couple weeks at a time, Prior says he’s largely able to manage his ME/CFS through an extensive medication regimen. He’s also able to exercise a few times a week without the debilitating crashes — post-exertional malaise, in medical jargon — that he used to experience.

As the COVID-19 pandemic began playing out in 2020, he recognized the similarities between his own affliction and what was being reported by those with long COVID. He could see patients and doctors struggling to define and understand the syndrome and its myriad manifestations in people who had contracted SARS-CoV-2. He read reports of people experiencing what sounded remarkably like post-exertional malaise.

He could also see patients, like those in the ME/CFS community, coming together to share their experiences, learn from each other and advocate on their own behalf.

In early 2021, he inked a deal for a book about how long COVID, and those living with the condition and working to better understand it, are changing the health care system.

But he knew he needed help to frame the science behind the book, so he enlisted Weaver, a 2019 40 Under 40 honoree who by then had become the associate director of the Brains & Behavior Focus Area of Georgia State’s Neuroscience Institute.

Weaver, who wrote several chapters of the book, also helped boil down scientific journal articles, identify sources to talk to, shape what questions to ask some of them and, as in the case of Dr. Walter Koroshetz, director of the National Institute of Neurological Disorders and Stroke at the National Institutes of Health, co-interview some of them.

“There were ways that Liz could push back in interviews that I might not have known to,” Prior says. “That’s Liz bringing her neuroscience background.”

Due out Nov. 15, “The Long Haul: Solving the Puzzle of the Pandemic’s Long Haulers and How They Are Changing Healthcare Forever” tells the stories of activist patients researching their own illness and realizing this new syndrome isn’t so new after all.

“Long COVID,” Prior says, “is the new face of an old disease.” 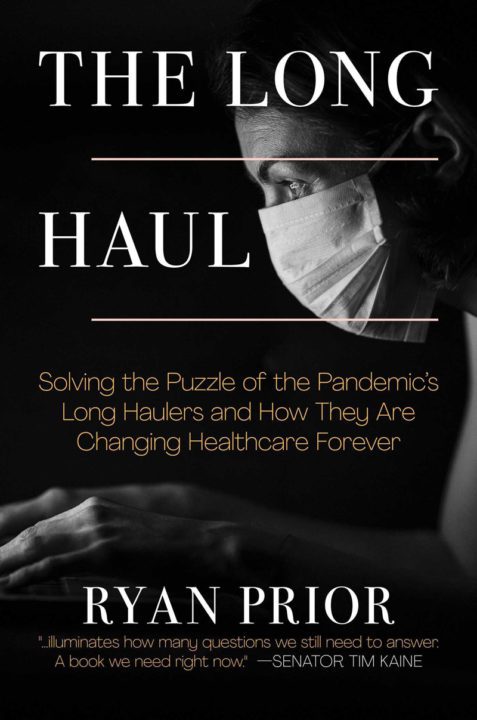 Due out Nov. 15, “The Long Haul: Solving the Puzzle of the Pandemic’s Long Haulers and How They Are Changing Healthcare Forever” tells the stories of activist patients researching their own illness and realizing this new syndrome isn’t so new after all.

The book is also a warning about looming crises in health care and in the workforce.

Like ME/CFS, long COVID was initially dismissed or misdiagnosed and is still not well understood by much the medical community. It’s not clear who is most at risk for developing long COVID and what its long-term health impacts are going to be on patients. Some people, Prior says, may not develop long COVID from their first bout of COVID-19, but perhaps only after their second, third or fourth exposure, meaning the pandemic’s effects will drag on long after the acute emergency phase has ended.

The onset of long COVID could also be delayed in some patients, affecting them only years later. Such a scenario would not be unprecedented, as science is starting to point to viral roots behind a number of neurological conditions, Weaver says.

The National Institutes of Health says Epstein-Barr virus, which goes unnoticed in most people, could be one of the triggers of multiple sclerosis.

Another recent study linked Alzheimer’s disease to a combination of infections involving herpes simplex 1, the so-called cold sore virus, and the virus that causes chickenpox and shingles. The study found the chickenpox/shingles virus reactivated dormant herpes virus, a kind of delayed one-two punch leading to a buildup of lesions associated with Alzheimer’s.

While the cause of ME/CFS, though suspected to be viral, remains unclear, there is growing recognition of the connection between ME/CFS and long COVID. Writing in The Atlantic in September, Ed Yong points to studies showing between 5 and 27 percent of people infected by certain pathogens develop ME/CFS, and reasons that COVID-19 has significantly increased the number of Americans with what is, effectively, ME/CFS by another name.

“People with ME/CFS may have gotten a virus that triggers it, but who knows because there may be a long delay in the onset of symptoms,” Weaver says. “People who are thinking they’re going to just get COVID and get over it are really rolling the dice.”

The kind of patient-led activism and patient-centered research detailed in the book and that could be the key to unlocking long COVID’s secrets — the kind of activism and advocacy that’s already sprung up around ME/CFS — is at the heart, Weaver says, of the Center for Behavioral Neuroscience and the Neuroscience Institute’s efforts to develop a Dana Center for Neuroscience & Society.

The Dana Foundation, which supports cross-disciplinary work in neuroscience, ethics, law, policy, humanities and arts, recently awarded a planning grant to the institute to support the design of a potential Dana Center. Such a center would engage in research that addresses issues raised by advances in neuroscience and develop a new generation of interdisciplinary experts who can make neuroscience accessible to the masses. The chosen center would receive $1 million a year for five years to support its work.

Proposals are due next summer with the winner expected to be announced late next year.

“We are now witnessing these movements across many societal disciplines, where diversity of perspective is valued and considered of equal weight to expertise,” Weaver says. “With this grant, we aim to build pipelines within our community that give voices to patients and their families. We will tackle the question: How do we disrupt the status quo in neuroscience-related research to not only put patients at the center, but learn from their knowledge?”