The Chef With No Stomach

THE CHEF WITH NO STOMACH

THE CHEF WITH NO STOMACH

At that moment in July 2005, Rueffert had everything going for him.

He’d just spent a month in New York competing on the very first reality TV cooking show, “The Next Food Network Star.” A people’s favorite and the third-place finisher, Rueffert dazzled judges, fans and fellow chefs with dishes perfected at his Woodbridge Inn in Jasper, Ga.

Rueffert grew up in the rising aromas there, just 13 steps above the hotel kitchen where his father prepared fine dishes with a German accent for guests.

Rueffert had a beautiful Savannah-born wife, Amy, and three children. His outgoing personality and good nature attracted friends and fellows. He reveled in Deep South foods and flavors, serving up Georgia hospitality by the plate.

Then a surgical team in Houston took out his stomach and part of his esophagus. Rueffert was told he had a 10 percent chance of survival.

Rueffert survived. Two months into recuperation and still unable to eat solid food, he found comfort trundling into the hospital cafeteria with the two IV bags that fed him.

“Hospitals don’t serve the best food in the world,” says Rueffert. “But seeing people eat, the pleasure it gave them, gave me hope.”

But cancer wasn’t finished with him. Leaks from surgery caused brain infections, among other serious issues. Rueffert underwent operations for the next seven years.

“I stopped counting at 15 surgeries,” Rueffert says. “Three times the doctors told Amy I wouldn’t live till morning. And all three times I just kept going.” 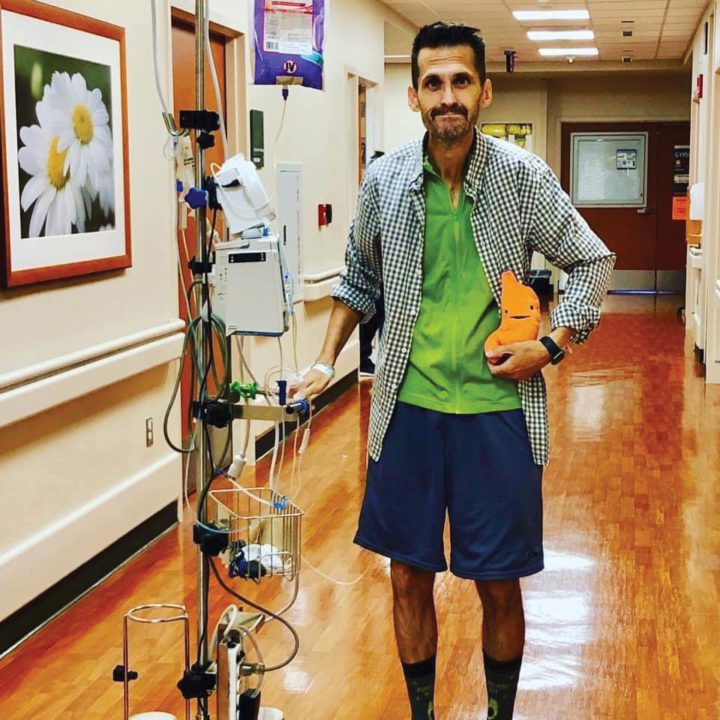 While recovering from one of many surgeries following his cancer diagnosis, Hans Rueffert moves around the hospital with an IV stand.

Eventually, doctors removed all of Rueffert’s stomach and all of his esophagus. They connected his jejunum, part of his upper intestine, directly to his throat. Rueffert lost nearly 90 pounds, from 215 to under 130.

He laughs. He loves. He goes to pickleball tournaments, writes cookbooks, blasts out cooking podcasts and serves as the smart, hope-inspiring face of the Gastric Cancer Foundation (GCF).

He cooks too, of course. He’s still in Jasper working as a guest chef at the Old Mulehouse Tavern, and he produces “The Gesundheit Kitchen,” a website and video series for the GCF where he champions the healthy, high-protein kind of diet that now sustains him through six small, nutrition-packed meals a day.

“People hear the word gesundheit after a sneeze, and they think it means bless you,” says Rueffert. “In German, it actually means good health.”

It’s why Rueffert ends every correspondence with that most personally significant word: Gesundheit.

A GREEN LIGHT IN LIFE

His father, Joe, grew up in East Germany under Communism but made his way out, eventually marrying Hans’ mother, Brenda, a Georgia native. Mr. Rueffert found work in Atlanta as food and beverage director at The Standard Club.

“Dad sculpted as a hobby,” Hans says. “One trip up to Jasper to buy the famous white marble there, he spotted a ‘For Sale’ sign on the Woodbridge Inn. He offered $100,000, and to his surprise, I think, we suddenly owned a hotel.”

This was 1976. The 127-year-old inn needed work, but work didn’t intimidate the family. Hans helped with guests, but he didn’t get into the kitchen until the right reason came along.

“I was 18, and I wanted to impress Amy,” Rueffert confesses. “I’d never even fried an egg.”

Things didn’t go well at first. After a week in the kitchen, Joe Rueffert privately told his wife, “Hans will never be a chef. He has two left feet.”

The couple married in 1997 at the courthouse in Marietta, Ga., with their immediate families smiling on — and wishing them gesundheit.

In 2004, Amy came across entry forms for “The Next Food Network Star.” Telegenic and charming, Hans applied and made the cut as a contestant chef. He connected with millions of viewers as well as the other guest chefs.

Late in the shooting, Rueffert felt a little physical discomfort, tummy issues and small pains. He passed those off as stress. Back home, though, two weeks after shooting the show’s season finale, he went to the doctor thinking he might be having a heart attack.

The diagnosis of adenocarcinoma, a cancer of the glandular cells, jolted the Ruefferts. Hans had already seen his father stricken with a rare renal disease that required two kidney transplants.

“We had made cancer out for our kids to be this terrible boogeyman,” Amy says. “And now we had to help them believe that daddy was going to be fine, just fine.”

It took time — and superb medical care — but Hans today is fine, just fine. In fact, he’s better than fine. He’s been cancer-free for nearly 17 years.

“From the minute you have that cancer diagnosis, you tend to think of it as an excuse, as a red light in life,” Rueffert says. “You think, ‘I can’t do this or that,’ because of the illness.

“So, I’ve tried to make cancer be the green light in my life,” he says. “It’s the thing in my tank, the thing that’s pushing me forward. I’ve been shown the sand in my hourglass. I never forget that there will only be one today, and what I do with it is my decision.”

In 1991, Rueffert enrolled in the Cecil B. Day School of Hospitality Administration at the J. Mack Robinson College of Business. (Cecil Day founded the familiar Days Inn hotel chain.) At that time, Georgia State was one of only five United States universities with a hospitality curriculum.

Rueffert found it a welcoming place.

“Having a student like Hans is what makes a professor’s career worthwhile,” says Debby Cannon, the school’s director. “He was exceptional.”

Rueffert had grown up in the restaurant industry, so his “business acumen rivaled people’s twice his age,” says Cannon, who taught him in several courses. “He was wise beyond his years, let’s say.

“He had a quiet sophistication beyond that of the typical college student, and it equated to understanding the world, fine cuisine and quality — the essence of the hospitality industry.”

“For my teachers, hospitality was not about a degree or a GPA. It was about a lifestyle, about putting the needs of others above your own,” he says. “That reinforced in me that if you provide exceptional hospitality, you don’t have to worry about rewards or money. If you treat people right, those fall into place.”

Through Georgia State, Rueffert experienced something like a master class in hospitality at Walt Disney World. The internship left a lasting impression.

“I still point with an open hand,” he laughs. “Disney does such an amazing job of going above and beyond for people. You never see a cast member — that’s what they call employees — step over a piece of trash. Four or five people come running to pick it up.”

Another kind of creativity led Rueffert to even more adventures in his Georgia State years. He met best-selling English horror novelist Clive Barker (“one of the most charming, gregarious people on the planet,” Rueffert says) at an event, and they got on.

Barker had been dreaming of a card game based on one of his novels, “Imajica.” Rueffert and another Georgia State student came up with a concept.

“Clive loved it,” Rueffert says. “He took us to New York City. We met with HarperCollins and sold them on the idea of our ‘Imajica’ card game. We flew all over the world to do demonstrations.”

As fun as it sounds, it left Rueffert cold.

“It was a lot of work in a cutthroat business,” he says. “It kind of killed my passion for games. And that hospitality gene was always missing.”

A cookbook author and co-host of the “But I Digest Podcast,” Hans Rueffert stays busy as a guest chef at the Old Mulehouse Tavern in Jasper, Ga.

The green light of cancer has since opened up one new doorway after another for Rueffert.

He and fellow chef Steve McDonagh — they became friends on the reality TV show — have created the “But I Digest Podcast” to tout healthy cooking and ingredients.

McDonagh is a Chicago caterer, restaurateur, actor and cookbook author. His cocktail book, “The New Old Bar: Classic Cocktails and Salty Snacks from The Hearty Boys,” is partially focused on pre-Prohibition cocktails. He’s now been friends with Rueffert for nearly two decades.

“Hans is a smart chef,” McDonagh says. “He knows a little about everything and a lot about a bunch. I can always look to him to fill me in on unexpected nuggets of information. And he’s a master German cook. He brought me some fig mustard that I hoard for special occasions.”

In 2009, just four years after his diagnosis, Rueffert published “Eat Like There’s No Tomorrow,” a cookbook spiced with Amy’s gorgeous food photos. Cannon feels it’s a vivid example of how a person can take a traumatic blow and make it positive.

“I love Hans’ book, and I use it often,” Cannon says. “I love it not just for the beautiful photography and exquisite food knowledge but for the strong message of valuing family, friends and yourself. To me, this book captures Hans’ spirit of survival, determination, optimism and love of life.” 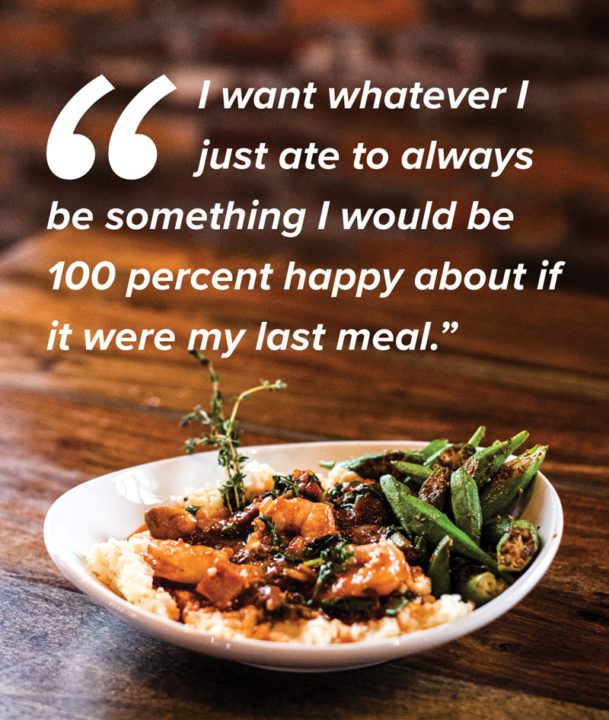 Chef Hans Rueffert’s shrimp and grits with a side of okra.

Rueffert’s current food philosophy evolved from what he calls his “Hans 2.0” digestive system.

“I want whatever I just ate to always be something I would be 100 percent happy about if it were my last meal.”

Rueffert mostly consumes raw or semi-raw foods, fresh vegetables and fruit. His meals are about 10 percent protein. He likes “power bowls,” such as artichoke hearts, roasted red pepper, spinach-and-rocket pesto, capers and olives. The Hans 2.0 system makes him an instant barometer of food quality: Within minutes of eating, he’ll feel energized by healthy foods or heavy and bad after sugary or greasy foods.

The food he crushes on most right now? Quinoa.

“Nutritionally,” he says, “it’s the perfect human chow. If I had pet humans, and I were buying a bag of food, I’d come home with quinoa.”

Whatever he’s serving, Rueffert makes sure his food is only part of the experience.

“If you get near Hans, he will try to feed you while talking your ear off,” says Amy. “Lord, the man can talk. Luckily, he’s smart and interesting, and hospitality is in his blood. Hans even got certified to marry people so he could feed them and marry them.”

Rueffert joyfully embraces all he symbolizes as a chef and as a survivor.

Rueffert is proud to be that somebody.

“I like the lighthouse effect,” he says. “Shining bright for others is, in my view, almost an obligation for people who survive.

“All our stories end with an obituary. To me, helping people along the way is the whole point of life. I get the greatest satisfaction hearing people say I helped them get through this or that obstacle. It means the world to me.”

By Torie Robinette Durham
Not College 101