Pivot In The Pandemic

As told to William Inman (M.H.P. ’16)
Use Scan QR Code to copy link and share it

When the economic consequences of the coronavirus disrupted his growing restaurant business, Matt Hinton did what he’s always done — found ways to adapt.

OUR BUSINESS HAD A REALLY DIFFICULT YEAR IN 2019. We opened a new shop in Tucker (Ga.), and that was a big challenge for us. But at the beginning of 2020, everything started to turn around.

So, March shows up, and it brings a pandemic.

I have three restaurants, so I knew I had to be ready. When it got to be bad in Washington state, around the second week of March, that’s when we started introducing curbside service. We got onboard with that earlier than most restaurants. 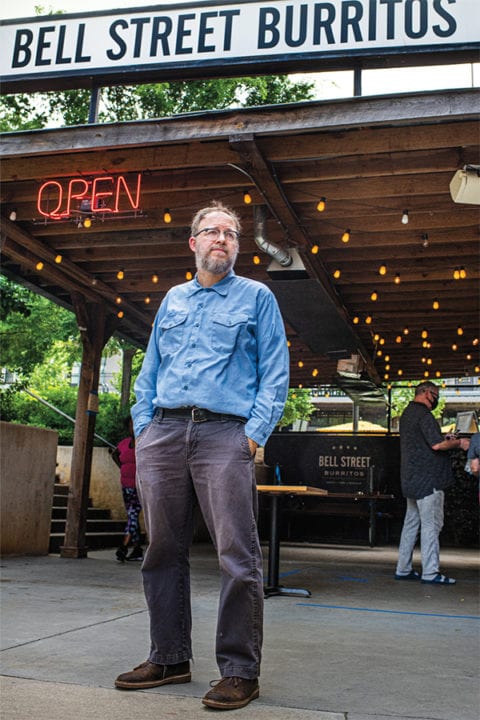 Matt Hinton completely changed his business model to keep his doors open during the pandemic. Because the restaurant pivoted so quickly, he’s been able to keep all of his employees working.

A couple of days later, I instituted a social-distancing policy at the service counter. I went to each location and put out blue painter’s tape six feet in front of the person running the register. Some people scoffed and rolled their eyes, but I wanted to be sure that my employees and customers were safe, and that people realized we were taking this health issue seriously.

Then, things really got bad.

Early on, it was clear to me that restaurants have a different supply distribution than grocery stores. We had no trouble getting toilet paper.

So, we cooked up a special where you could get a free roll of toilet paper with your order if you used a certain coupon code. It’s definitely not the kind of thing a burrito shop would do in the normal world, but nothing is normal right now.

As restaurants were closing and restaurant workers were getting laid off left and right, there were a lot of people on social media out there saying, “If you’re concerned about your favorite restaurant, go support them by buying gift cards to use later.”

That was my worst nightmare because we’re spending money now to stay open. If people show up five months from now to cash in a bunch of gift cards, who knows where we’ll be financially?

I wanted to find a way that people could support us and our staff, but at the same time also support restaurant workers around town who are losing jobs.

So, we established an initiative where people who like us could go to our website and purchase an e-gift card, and that money would go through The Giving Kitchen and get distributed to restaurant workers in need.

It benefited the workers, it gave people a way to be charitable, and it helped us stay up and running as well.

As a restaurant owner, I’ve always been about simplicity — there are the things we do, and that’s it. Our menu was pretty simple, but here we are, times are strange, and I have to do whatever it takes to keep us going.

So, we cooked up a special where you could get a free roll of toilet paper with your order if you used a certain coupon code. It’s definitely not the kind of thing a burrito shop would do in the normal world, but nothing is normal right now.

So, we pivoted our entire model, and we started making a lot more than just tacos, burritos and quesadillas. We turned into more of a market. We began selling toilet paper — not just giveaway rolls here and there, but entire packs. We sold produce, paper goods and bleach.

We started making prepared meals, and even did an Easter dinner where people could buy a smoked spiral-cut ham with their choice of three sides.

We’re selling barbecue now, and it’s pretty good. We’re just doing all kinds of crazy stuff to keep the doors open that we would never otherwise do.

Because of that, because we were able to broaden, I haven’t had to let go of a single employee.

Our sales are down, but not dramatically, and we’re doing OK. We’re doing everything possible to stay safe. In our shops, we have an alarm that goes off every 20 minutes letting us know it’s time to sanitize every surface.

I’m sure the way we operate won’t go back to the way it was before March. Maybe we will continue to do all of the different things we’re doing now. I don’t know about selling toilet paper, but you never know.

One thing I reflect on is the fact Bell Street was born during similar circumstances. We opened up in 2009, during the recession. I was teaching religion at Morehouse and Spelman at the time, and during the recession, enrollment went down. One of my classes was eliminated, so I had to come up with a scheme to make some money that semester — my wife, Erica (B.A. ’99), and I have three kids — and that’s how Bell Street was born.

At first, I was delivering burritos to people’s houses, but the following semester, the class didn’t materialize. So, I took a big swing and opened our first location in the Sweet Auburn Curb Market right by the Georgia State campus.

I’m a stubborn person to begin with, and there is no work that’s beneath me. So, if I had to dig ditches or open a restaurant, I was going to do whatever it took to get us through. And we’re in a similar situation now, but I just have a lot more mouths to feed. Thankfully, people really like our burritos. And our barbecue!

We’ll do whatever it takes to weather this, and we’re finding some truly creative ways to keep our doors open.