Adventures Of A Lifetime

As told to Michael Davis (B.A. ’03)
Use Scan QR Code to copy link and share it

A political science major who graduated in May, Austin Birchell had an incredible college career — from meeting Bill Gates to hosting his own man-on-the-street interview series.

I TOOK FULL ADVANTAGE OF MY EDUCATION. I learned every bit I could, and I earned my degree. Not walking across the stage doesn’t take that away from me.

Because of Georgia State, I’ve experienced a lot that I wouldn’t have otherwise. Tops on the list was the time I met Bill Gates.

It all started in the summer before my freshman year. I didn’t know it at the time, but I was one of the first students to interact with the Admissions chatbot, Pounce.

I wasn’t receiving my Zell Miller Scholarship award money, and throughout the summer I was told it was probably still processing. Finally, two weeks before classes started, Pounce told me which office to contact to resolve it.

As a first-generation student — I don’t have a sibling who went to college — having that help was huge. I probably would have had to sit out a semester.

The next summer I got a call from Allison Calhoun-Brown, associate vice president for student success, who asked if the chatbot was helpful. 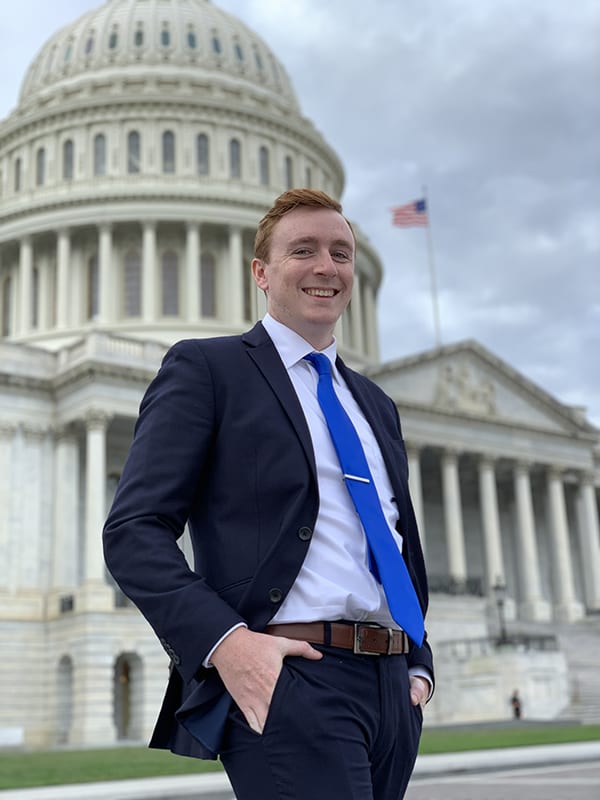 During his college career, Austin Birchell (B.A. ’20) twice went to Washington, D.C. as an intern to study policy issues.

I explained what happened, and she asked me if I wanted to tell my story to the Gates Foundation.

I remember wiping the sweat off my hands to shake his hand. I was supposed to show him how the Pounce chatbot works, so I had to crack a joke to break the ice.

“First off, before we start, Mr. Gates,” I said, “it’s extremely humbling to show you a software.”

He laughed, everybody else laughed, and I felt so much better after being able to joke around like that with the man who founded Microsoft and is one of the world’s richest guys.

On the way home, I called my mom and screamed, “I just met Bill Gates!” Both of us were just bawling on the phone. It ended up truly being a life-changing event because a week later I was in a Wendy’s drive-through when I got a call from National Public Radio’s “Hidden Brain.”

So, two weeks later I was on air with Scott Burke, assistant vice president for undergraduate admissions and housing at Georgia State, talking about meeting Bill Gates and my experience with the student success initiatives.

Later on, I got a text from Andrea Jones, associate vice president for public relations and marketing communications (PRMC), asking if I would meet with Secretary of Education Betsy DeVos. I met her one-on-one with my adviser Emily Buis for about 30 minutes and talked about advising at Georgia State. I made sure to mention I was a Pell Grant student a couple of times and speak on the importance of the grant.

I contacted Andrea shortly after that and asked to meet her for career advice. I told her I really liked being a representative for the university because I believe in its mission. In spring 2018, I was hired as an editorial student assistant in PRMC. You may have read a couple of the stories I wrote in this magazine.

In the first semester of my junior year, I worked for Sen. Johnny Isakson (R-Ga.) as an intern. I worked Mondays, Wednesdays and Fridays in Isakson’s office, and worked in PRMC Tuesdays and Thursdays while taking three classes.

It was a nightmare semester but working for Sen. Isakson was a great experience, and I made a lot of good connections.

I also spoke about the chatbot before members of a higher education-focused nonprofit called Postsecondary National Policy Institute. I was still working for the Senator Isakson at that time, and there were a lot of representatives of members of Congress there who asked me about Georgia State’s student success initiatives.

MaryEllen McGuire, who had been senior adviser for education on the White House Domestic Policy Council under President Obama, was the president of the organization. She told me at the end of the panel that they have a summer scholar program where they hire two scholars to come to Washington, D.C., to work on education policy research.

I kept in contact with her and applied to be a PNPI summer scholar the following February. I was accepted and spent the summer of 2019 in Washington, D.C.

My dream job is to be an education legislative assistant for a member of Congress, so I am going to get a master’s degree in public policy… I’m coming back to Georgia State, of course.

And that was another life-changing experience. I got to shadow Congresswoman Suzanne Bonamici (D-Ore.) for a whole day, and that’s where I met people from Sen. Elizabeth Warren’s (D-Mass.) office and talked to people in Sen. David Perdue (R-Ga.) and Isakson’s offices and really sharpened my pen about higher education.

My dream job is to be an education legislative assistant for a member of Congress, so I am going to get a master’s degree in public policy. I think that would give me a more concrete idea of how laws pass at a local, state and federal level. I’m coming back to Georgia State, of course.

While working with PRMC, I also got to be Pounce, literally this time, though not as the official athletics mascot.

The coolest thing I got to do as Pounce was relighting the Olympic cauldron for the U.S. Olympic Team marathon trials in February. Muhammad Ali was the last person to light the flame in public, so it went from Muhammad Ali to Pounce, and I was in the Pounce suit. I used to box in high school, so it was crazy. A very surreal moment.

I never thought I would have the Pounce costume sitting in my house, but since the pandemic sent everyone home, it’s been with me. In between lectures and assignments, I’ve done about nine TikTok videos for PRMC with it now.

As Austin, not as Pounce, I also starred in “Adventures with Austin,” a series of videos where I was a “man on the street” going various places, interviewing people and cracking jokes. It’s been one of the coolest things I’ve done at Georgia State.

I got to run on the football field and practice with the team. I got to do paddleboard yoga. I dressed as Dracula and went through a sorority’s haunted house. I went on a trip to Providence Canyon with a Touch the Earth group.

It’s changed my college experience, and I’ve done things I never thought I would. Who can say they practiced with the football team if they’re not a football player?

I know there are at least 10,000 people who have seen me be a dork on camera, and I honestly don’t mind it because, hey, you only live once.

You usually know when it’s your last time and you get to breathe it in. That has been way harder than being told you’re not able to walk at graduation.

Below, check out an episode of “Adventures with Austin” when he practiced with the Georgia State football team, interviewed head coach Shawn Elliott and caught a pass from quarterback Dan Ellington. Using mathematical models, Gerardo Chowell is part of a research team producing daily forecasts of the coronavirus’ trajectory.
As told to Jennifer Rainey Marquez
A professor of epidemiology, Monica Swahn was closely monitoring the unfolding pandemic when her father fell ill with COVID-19. She remembers him here and discusses his death against the backdrop of various responses to the crisis.
By Monica Swahn

Using mathematical models, Gerardo Chowell is part of a research team producing daily forecasts of the coronavirus’ trajectory.
As told to Jennifer Rainey Marquez
A professor of epidemiology, Monica Swahn was closely monitoring the unfolding pandemic when her father fell ill with COVID-19. She remembers him here and discusses his death against the backdrop of various responses to the crisis.
By Monica Swahn