Stepping Up To The Plate

As told to William Inman (M.H.P. '16)
Use Scan QR Code to copy link and share it

With her sophomore season scuttled by the COVID-19 pandemic, outfielder Gabby Benson was looking for a way to make a difference by giving food to the needy. When head coach Roger Kincaid heard what she was doing, he found a way to help bolster her efforts.

BENSON: We played at Auburn on Wednesday, March 11 — we lost 2-1, but we played great and should’ve won — and after the game, we were sitting in a restaurant there watching ESPN. That’s when we saw that they were cancelling the NBA season.

KINCAID: I remember looking at my coaches that night and saying, “This is a big deal.”

BENSON: We had to be on a bus at 3:30 p.m. the next day to go to South Alabama for a conference series. I remember we had the bus packed and ready to go, and then we were all told to wait.

KINCAID: I told the kids, “Hey, we’re planning to go, but if something changes, I’ll let you know.” The bus was supposed to pull out at 3:30, and I told them to be ready. But I was getting text messages and phone calls from [Athletics Director] Charlie Cobb saying, “Hey, give us 30 minutes, give us 30 minutes.” Then at about 5:30, we got the word that we couldn’t go.

BENSON: It didn’t really hit me then. I thought it would be a two-week thing and then we’d be back in business. 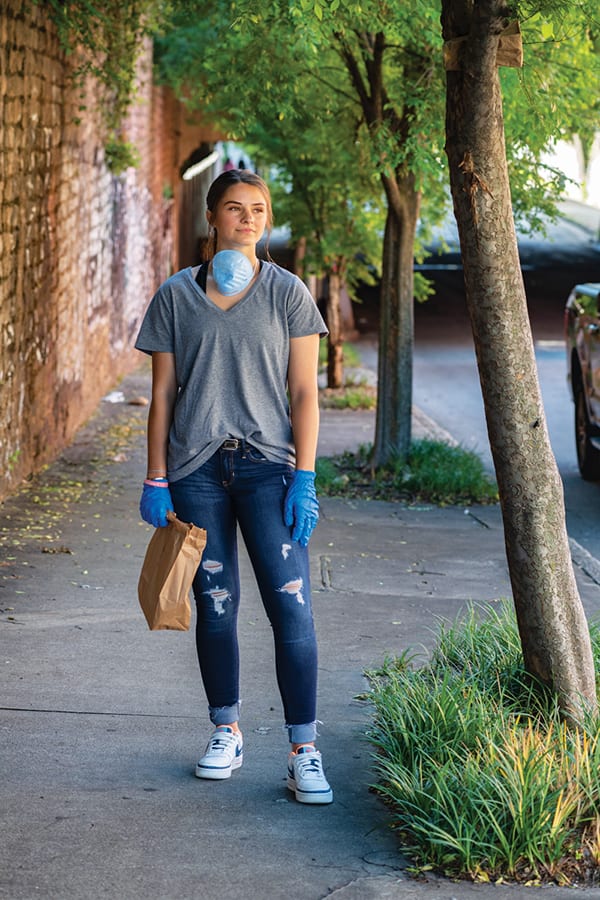 After moving back in with her parents amid the coronavirus pandemic, Gabby Benson figures she has helped distribute food about 20 times to the homeless and the needy.

KINCAID: After we unloaded the bus, I had all my players come to the [Georgia State] stadium. Although the official word was nothing was cancelled, only suspended, we knew what was coming. It broke my heart to stand up in that conference room and break the news to those kids. It was tough. Especially for our seniors — there’s a lot of missed opportunities there. Charlie [Cobb] was in the building, and he saw us in the conference room, and he came in and spoke to the team, which was really cool.

BENSON: I didn’t really know how to process it. I lived in the Pencil Factory Flats by campus, so when school was cancelled, I went home to my parents’ house in Dacula (Ga.). So, my season was over, school was out for a couple of weeks, and I’m out of my downtown apartment and at my parents’.

KINCAID: After everything shut down, my coaches and I split the team up into thirds. We reach out to our players every Tuesday and Thursday, either on a phone call or through FaceTime. First and foremost, we’re checking on their health and how they are doing. Some of them, you can hear it in the tone of their voice that they’re struggling a bit, so we want them to know that we’re there for them.

We also have a system called “Panther Pals” in which each kid on the team is assigned a player that they stay in touch with. Every time I speak with a player, I ask for an update on her Panther Pal. And I insist that they don’t just text but that they FaceTime or talk on the phone.

BENSON: Sofia Tuñón is my Panther Pal. She’s a freshman catcher, and we talk every week.

KINCAID: When I talk with our players, one of the big things I stress is that they have a purpose. I tell them, “Make sure that you’re accomplishing something every day, beyond your studies.” So, I was so proud when I saw a Facebook post from Gabby’s mom that had pictures of Gabby giving away food in downtown Atlanta.

BENSON: My mom is head of the pantry at our church, and we’ve been delivering food to the needy for quite a while. And when I finally came to the realization that, you know, here I am stuck at home, I started thinking about the people without a home, without a place to go. So, we went out and bought a bunch of food, drove downtown and gave it away.

KINCAID: Well, it just so happened that I had a garage chock-full of food at the time. In our locker room at Panthersville, we keep a bunch of healthy snacks for practices, pregame and postgame. I was telling my wife, “I don’t know what to do with all of this stuff!” So, I packed it up, put it in boxes and brought it all to my garage. We were thinking to ourselves, “What are we going to do with all of this food?” We didn’t want it to go to waste, so we were trying to figure out how to donate it.

So, when I saw that on Facebook, I called Gabby and said, “Hey, this is pretty cool. Tell me about what you’re doing.” And come to find out that the family was out there buying food and giving it to the less fortunate.

BENSON: He called and said, “Hey, do you want to come get all of our team snacks to give out?” And, of course, I said yes. There was a lot of food!

KINCAID: They took it straight from my garage, put it in their truck and started giving it out.

BENSON: That day, we delivered food downtown and everyone was very grateful. There’s never been a problem giving food out. We had all of those snacks, so we made several bags to hand out. Then we took some bags and gave them to families here in Gwinnett County whose kids normally receive, and depend on, two meals a day from school.

KINCAID: Gabby is such a good person, a great student-athlete. I take great pride in what our kids accomplish away from the field, and it’s been wonderful to watch Gabby’s journey out there helping people.

BENSON: We’re still going strong. We’ve been out about 20 times during the pandemic. There are bags in our kitchen ready to go.