While this baseball season may have been thrown a curveball, Georgia State’s new baseball coach Brad Stromdahl — a former assistant coach for the Panthers — is excited about the program’s future.
By Austin Birchell (B.A. ’20)

When Brad Stromdahl got the call to interview for the job of head baseball coach at Georgia State, it felt like the start of a homecoming.

Ahead of his seven seasons at the helm of Georgia Gwinnett College’s baseball program, Stromdahl spent five seasons at Georgia State (2007–11) as a recruiting coordinator and hitting instructor.

The Panthers hit .300 or better in each of those seasons and set a Georgia State record in 2010 with an average of .356.

Even though all spring sports have been cancelled this season because of the COVID-19 pandemic, Stromdahl is excited about the state of the Panthers’ program. 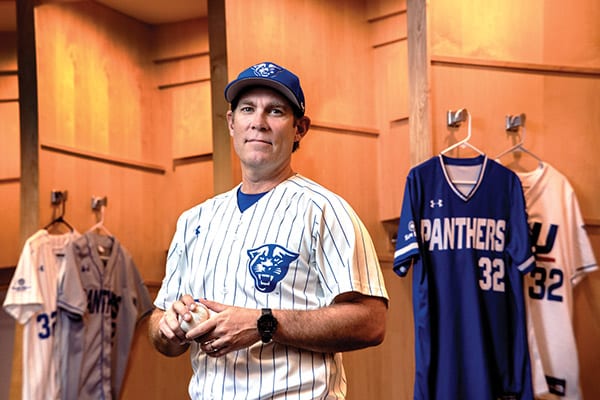 “Today, I’m sitting here, and I couldn’t be happier with where we are and where we’re going,” Stromdahl said. “The future is so bright, and the future is now, not only for baseball and the Athletics Department, but for Georgia State as a whole.”

In 2011, Stromdahl was selected as the first head coach of Georgia Gwinnett’s new baseball program. Over the next two years, he laid the groundwork for its inaugural season in 2013. In his seven seasons at Georgia Gwinnett, the Grizzlies won 75 percent of their games (328-104) and reached the National Association of Intercollegiate Athletics World Series three times, making semifinal appearances in 2018 and 2019.

“It was really great to have the opportunity to learn to build,” Stromdahl said. “Now, I can take what I learned there and apply it to the Georgia State program on a fundamental level and really focus on the game. Now, it’s about coaching, getting the players ready and giving them an unbelievable Division I experience.”

“Players enjoy playing for him, and his beliefs mirror the culture established within our department,” Cobb said. “Georgia State baseball was successful during his previous tenure, and we have the same expectation going forward.”

Back in his old stomping grounds, Stromdahl has set his sights on the College World Series once again.

“Ultimately, what we are trying to do is have fun and play a really exciting and fast-paced style of baseball,” Stromdahl said. “I know what it takes to win and go to a World Series and our goal is to make that happen this year. We’re going to make mistakes, and we may lose a couple of games, but you can bet we’re going to win a lot more than we lose.”

A background role for Shahreen Elahi (B.S. ’18) in “Spider-Man: Homecoming” brought a glaring lack of Muslim representation in TV and film front and center.
Interview by Torie Robinette Durham
Author Tom Chaffin (B.A. ’77) digs deep into the past to uncover some of history’s most intriguing stories.
By Michael Davis (B.A. '03)
With Kell Hall out of the way, construction crews are nearing completion on the first phase of the greenway, Georgia State’s future gathering space at the center of the Atlanta Campus.
By Benjamin Hodges (B.A. '08)
Researchers in the School of Public Health are helping stabilize Georgia families affected by substance abuse.
By Jennifer Rainey Marquez