Author Tom Chaffin (B.A. ’77) digs deep into the past to uncover some of history’s most intriguing stories.
By Michael Davis (B.A. '03)

From an early age, Tom Chaffin knew he wanted to be a writer, and by the time he graduated from high school he’d already decided to pursue a career in journalism. He spent decades in Atlanta, New York, San Francisco, Paris and other cities working as a freelance and staff writer for newspapers and magazines

While Chaffin still occasionally publishes articles and op-eds, he left full-time journalism 25 years ago to start a book career that has so far yielded seven narrative histories. His most recent work — on Thomas Jefferson and the Marquis de Lafayette — was published late last year, earning praise from the likes of The Wall Street Journal and Publisher’s Weekly.

“All those years as a journalist, I always had a hankering to write books,” Chaffin said. “But when you’re writing articles it’s hard to find the time and space to write a book.” 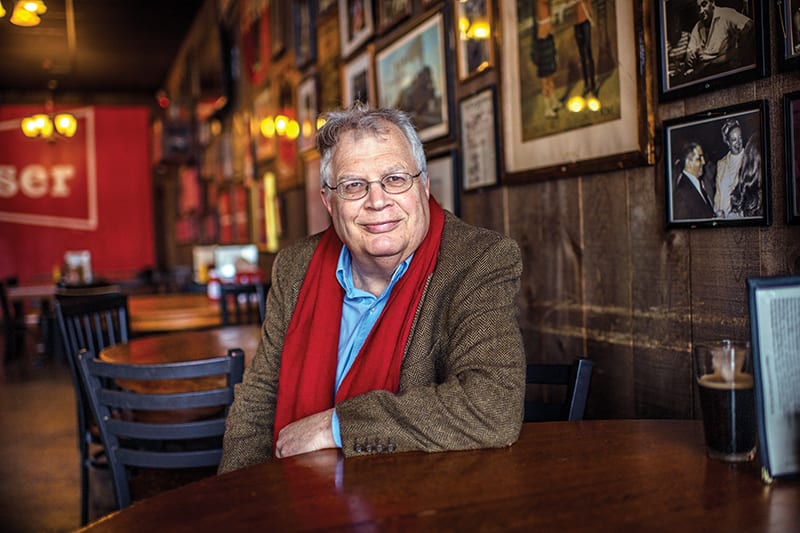 Chaffin began mining the quarry for his first book after returning to Atlanta in the mid-1980s and taking a job at the Fulton County Daily Report. He’d bought a collection of bound copies of Harper’s Magazine that were more than 100 years old from a bookstore that was closing shop. As he turned the pages, the name Narciso López kept popping up in articles every few months in issues from the early 1850s. During those years, López led a succession of unofficial armies from the United States bent on invading Cuba and placing it under U.S. control.

“He’d show up as the lead story and then disappear for months, and there would be another story about him a few months later,” Chaffin said. “My casual curiosity sort of slowly evolved into a commitment to do a book.”

On weekends and through vacations, Chaffin continued to research López’s activities. It was his wife, Margareta Larsson, now a senior lecturer in Georgia State’s Intensive English Program, who suggested he turn the project into a dissertation for a graduate history program.

The result was a Ph.D. in 1995 from Emory University and the book “Fatal Glory: Narciso López and the First Clandestine U.S. War Against Cuba,” published in 1996 and drawn from research conducted in the U.S. and Cuba.

“All of my books are character-driven,” Chaffin said. “Much of my research is like being paid to read other people’s mail.”

By digging through primary sources such as journals and letters and often visiting the places depicted in his books, Chaffin creates biographies that shed light on the people at the center of historical events. Those travels often help him to better understand letters, diaries and newspaper accounts, and even discover errors recorded in them.

Chaffin said his discovery while visiting Versailles that a balcony faced an internal courtyard rather than the exterior of the palace changed his perception of one event’s significance. As Marie-Antoinette spoke to an angry mob from the balcony in 1787, Chaffin said they were not speaking to a crowd outside the palace, but one that had broken past guards and made its way to an area normally off limits to all but the royal family.

“I realized, in other words, that, for the king and queen, their predicament was even more fraught than I’d originally assumed,” Chaffin said.

Unlike those he writes about, Chaffin said, he enjoys the luxury of knowing how their lives turned out. But he’s more interested in their journeys and relationships, and the occasional chance occurrences that shaped history.

“As an author, I try to write books that will hold up to scholarly scrutiny but also win audiences of general readers,” he said.

Researchers in the School of Public Health are helping stabilize Georgia families affected by substance abuse.
By Jennifer Rainey Marquez
As executive director of the Atlanta Bicycle Coalition, Rebecca Serna (M.S. ’07) is focused on improving infrastructure for all modes of travel.
By Michael Davis (B.A. '03)
A background role for Shahreen Elahi (B.S. ’18) in “Spider-Man: Homecoming” brought a glaring lack of Muslim representation in TV and film front and center.
Interview by Torie Robinette Durham
With Kell Hall out of the way, construction crews are nearing completion on the first phase of the greenway, Georgia State’s future gathering space at the center of the Atlanta Campus.
By Benjamin Hodges (B.A. '08)