Former Georgia State cross country coach Nate Houle (M.S. ’15), with the help of his wife and former Panther runner Kacee (B.S. ’11), beat stage 4 carcinoma and got back on the track.

Former Georgia State cross country coach Nate Houle (M.S. ’15), with the help of his wife and former Panther runner Kacee (B.S. ’11), beat stage 4 carcinoma and got back on the track.

n the late 2000s, Nate Houle was a middle-distance runner at Southern Utah University with the fifth fastest 800-meter time in the school’s history. In the classroom, he studied physiology and the science of the sport, and he had a dream of using that knowledge to coach other runners to success.

When he began looking into graduate programs, Georgia State not only offered him a research position in the muscle biology lab, but an opportunity to become a volunteer assistant for the cross country and track teams. 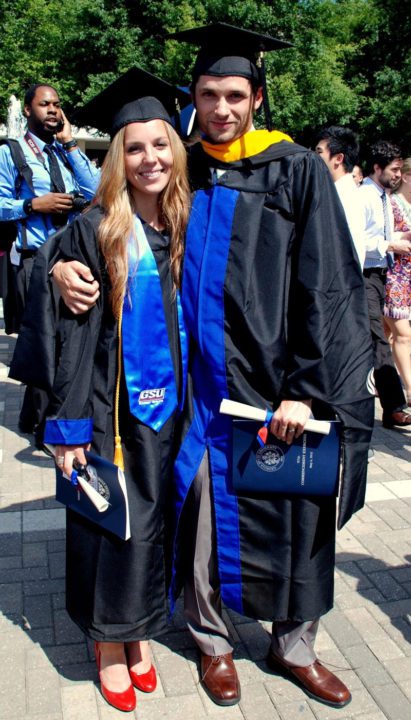 Nate and Kacee Houle after their Georgia State graduation.

His wife, Kacee, a cross country runner at the University of Utah, transferred, earned a scholarship and a spot on the team. The newlyweds flourished at Georgia State. Kacee earned her Bachelor’s Degree in Psychology and went on to finish 13th in the Colonial Athletic Conference cross country championships in 2010, and Nate helped lead the Panthers women’s team to the school’s first-ever conference outdoor track and field championship in 2011. He wrote his thesis for his Master’s Degree in Exercise Science on fatigue resistance differences in male and female distance runners.

Nowadays, the couple are parents to three little ones, and they call a blue house with a two-car garage in Pocatello, Idaho, their home. Nate is making good on his dream as the head cross country coach at Idaho State University, and he takes pride in being a positive influence on his athletes’ lives.

You wouldn’t know it by looking at their healthy, glowing, happy family, but their path has been anything but easy. In fact, just a few years ago, Kacee was pleading with God because she wasn’t sure her husband would live to see his 30th birthday.

A few weeks earlier, he’d gone to the doctor for what he thought to be a sinus infection. His teeth were hurting, and he’d been having nosebleeds. There was a mass growing inside his sinus cavity, a non-cancerous papilloma. He had a minor procedure for the growth and recovered quickly. The Houles were assured, despite a small chance of cancer, that it was no big deal.

But that morning, the doctor wanted to see him at his office straight away. Kacee was training for the Boston Marathon and gearing up for a run when the doctor called. Would Nate mind if she squeezed in some miles to calm her nerves before driving to the medical center? He said go ahead. She had a deep sense of foreboding as she followed the paved Murdock Canal Trail near their home on the outskirts of Provo, Utah, where the Houles lived after graduating from Georgia State. She prayed that if cancer should be their battle, Nate would make it through.

Doctors informed them that at 29 years old, Nate had stage 4 squamous-cell carcinoma — extremely rare for a young and healthy non-smoker. Kacee remembers holding her breath as Nate and the doctor discussed his options, and what this meant.

As they walked out, Nate joked, “You sure picked a good one,” and Kacee could feel the sobs building up inside her. She fled to the waiting area, and let the tears come, hard.

Following the diagnosis, there was a flurry of doctor visits. Nate was referred to the Huntsman Cancer Institute, a world-renowned hospital in Salt Lake City.

“Every time we went to an appointment, we’d learn a little bit more,” Kacee says, “and every time we learned more, it got worse and worse.”

A Type-A notetaker, Nate surprised himself by not researching his condition and becoming an expert on it. To this day, he feels somewhat undereducated on the science of his cancer. Likewise, Kacee didn’t want to know the gritty details.

“I knew our odds were bad enough,” Kacee says. “I didn’t need to fill my head with all these examples of how bad it actually was.”

One thing Nate did look into was whether there were other people who had gone through the same thing. What were their experiences? Was it normal that they didn’t want to know what they were truly up against?

By coincidence, they discovered that a friend’s brother received the same diagnosis and was treated by Nate’s surgeon at the same hospital. They befriended him, but tragically, he only lived two years post-surgery.

The details of Nate’s case were so unusual that a crew of doctors regularly met to discuss it. One doctor presented Nate’s case during a medical conference to some of the best surgeons in the country, and even they had no idea what was going to happen on the operating table.

On Nov. 13, Nate went into surgery. Kacee dropped him off at 7 a.m. for the 18-hour procedure. Doctors removed his left fibula and used it to reconstruct the left side of his face.

Kacee was told that when she saw her husband again, his face would be rearranged, different. There was a 90 percent chance he would be missing an eye.

For Kacee, the day of surgery was the most difficult. She didn’t want to be at the hospital all day, so she waited it out in a hotel room nearby with her best friend, praying, trying to make small talk and willing herself to not focus on how Nate might not survive, how he might not get to keep his eye.

But at 12:03 a.m., Kacee received word that Nate had not only made it through the surgery, but doctors had also saved his eye. They told her they’d never seen anything like it — the cancer had broken through Nate’s skull and was working down into his teeth, yet it hadn’t permeated the itty bitty, pliable membrane surrounding his eye.

As people of faith, the Houles called it a miracle.

“It’s just a confirmation that miracles do happen,” Kacee says. “And we got ours.”

Friends put on a fundraising 5K race called DomiNATE, and more than 700 people raced, raising more than $45,000 to help with medical bills. The Houles say because they received such an overwhelming show of support, it was a challenge to accept the help.

“We had to step back and realize that people get a certain amount of joy and satisfaction out of helping other people,” Nate says. “We had to kind of let our pride go and accept more than we are accustomed to.”

“They just threw everything on him. He went through one of the hardest surgeries, followed by the some of the highest doses of radiation.” — Kacee Houle

The road to recovery was a long one.

“They just threw everything on him,” Kacee remembers. “He went through one of the hardest surgeries, followed by the some of the highest doses of radiation.”

Nate’s entire mouth structure was different, and he had to learn how to swallow and eat again. He can still barely open his mouth wide enough to eat a piece of bread. 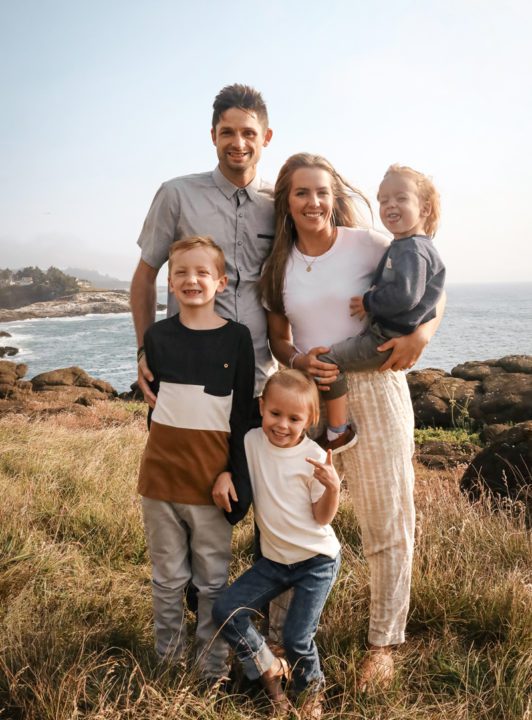 Nate and Kacee with their two sons Ames and Theo and daughter Corra.

“Before I hand Nate his hamburger, I always squish it down,” Kacee says. “If I cook him dinner, I always smash stuff down.”

A few months after his radiation treatment, Nate started coaching Kacee and his sister, Heidi. The summer before Nate’s cancer diagnosis, they both qualified for the Boston Marathon. It gave him a sense of purpose again. Kacee helped Nate through cancer, and now he was helping her meet her running goals.

That June, Nate was hired as the head cross country coach at Idaho State, and the Houles have called Pocatello home ever since. There’s still a chance that the cancer could return, and that knowledge is something the Houles live with every day.

But against the odds, they’ve beaten it already.

Like he always has, Nate pours his hard-won perspective into running. Guiding his athletes, he’s been able to encourage them to keep their pace, and keep their hope, with a clear finish line in sight.

The National Institute for Student Success is showing that in higher education, there is, indeed, a better way.