Senior guard Corey Allen is finding even more success in his second season with the Panthers.

One of the best three-point shooters in Division I basketball could not get many clean looks during the first 15 minutes of Georgia State’s Jan. 16 game against Coastal Carolina. The game was somewhere else — in the paint, in transition — and Corey Allen just cruised along with it, content to let his teammates carry the scoring while he defended, facilitated offense, deflected balls in the passing lanes and snatched the occasional rebound. Allen understood his time would come.

And it did. Toward the end of a 71-68 win, Allen sank two free throws, made a deft pass inside for an easy bucket and hit a three-pointer. Allen scored a modest 15 points — his season average — but there was nothing modest about his impact on the game.

When everything was on the line, Allen had the ball in his hands.

Similarly, during the Feb. 11 game against rival Georgia Southern, Allen knocked down two free throws with 8.3 seconds to seal the victory. Late in the game, he hit two three-pointers on back-to-back possessions — the second with 3:40 to play — to give the Panthers a one-point lead.

He was named Georgia State’s student-athlete of the week after the performance. 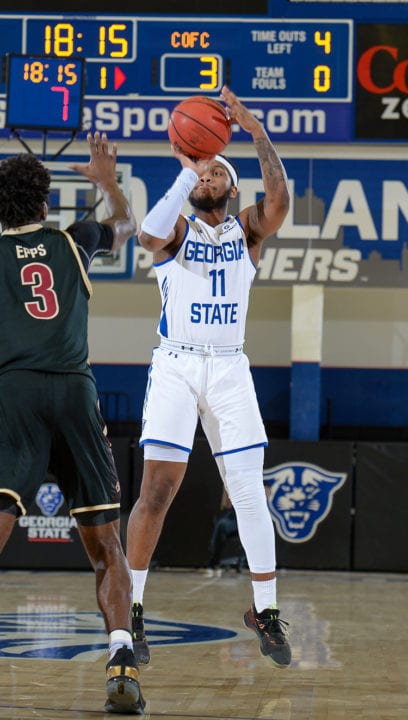 Corey Allen is averaging a team-high 15 points per game while shooting 49.3 percent. He makes more than 45 percent of his three-point shots, which ranks No. 9 in the NCAA.

Allen lets the game come to him these days. He is poised, not over-eager and holds it together in a crisis, which is what you expect from a senior.

“Last year, I was hunting my shot more,” Allen said. “I talked to coach (Rob Lanier) over the summer and he talked about letting the game come to me. I’m not trying to force anything. I feel like I’m playing a lot better.”

Four years ago, as a freshman at the University of Detroit Mercy, Allen was on a trajectory to be a clear centerpiece player for the Titans. He averaged 14.4 points a game and was the Horizon League Freshman of the Year after making almost 45 percent of his three-pointers. A native of Ypsilanti, Mich., Allen came back his sophomore season at Detroit and averaged another 14 points per game. He was set to break out as an upperclassman.

But when Detroit head coach Ray McCallum was fired and became an assistant at Georgia State, Allen decided to transfer with his coach. After sitting out a year, per NCAA rules, Allen became eligible for the 2019-20 season. By then, McCallum had joined former Georgia State Head Coach Ron Hunter at Tulane.

“They wanted me to go with them to Tulane, but I didn’t want to leave,” Allen said, adding he’d already bonded with Lanier and the staff.

“Corey Allen hasn’t shown his best basketball yet,” Lanier said. “He is capable of playing at a higher level. It’s going to happen here.”

Growing up, Allen would always stick around after practice in high school to get extra shots. At Georgia State, it is more dutiful than that. Depending on the day, he has to make 100 or 200 three-point shots after practice. Assistant coaches stay late with him to feed him the ball.

“That keeps me in my rhythm,” Allen said.

Allen is not in a hurry for the next level. The human learning and development major has meshed with the community, he said, because of the camaraderie on campus.

“I appreciate the diversity. There are all kinds of different people,” Allen said. “I love that. And people are more eager to show their friendliness.”

He seems to be just fine with being a college kid, but there have been a few games this season where he might see a strange face in the crowd — scouts checking out how he might perform at the next level.

“I’ve got a few friends who play overseas and in the NBA, and it motivates me to get there myself,” Allen said. “But right now, I’m playing to win for Georgia State — nothing else. I’m playing for a Sun Belt championship and to get to the NCAA tournament. I want to get there first.”