'At His Table, You're Family'

changed course and is now an award-winning restaurateur

embarking on the career he always dreamed of.

Though he was planning to attend medical school after graduating from the University of Georgia, Sean Chang couldn’t shake the sense of satisfaction he got from plating up food he’d cooked himself to serve friends.

In his first year in Athens, he hoped to scratch the itch by finding a job in an upscale restaurant but struck out with every application. He turned to his dorm — which had a kitchen on every other floor — to test recipes and forge new friendships. The allure of the industry grew so strong he even considered dropping out and moving to Europe to take an unpaid culinary internship.

Now 25 years old, Chang is the proprietor of his own fast-casual concept, Mukja Korean Fried Chicken, and is earning accolades from his peers. In September, the Georgia Restaurant Association (GRA) named Chang Restaurateur Rookie of the Year, highlighting his efforts to make the Midtown restaurant a neighborhood staple while providing work-life balance for employees.

Chang decided to drop the idea of med school and pursue his passion for cooking in earnest after a serious car crash resulted in a disabling injury.

While driving to his parents’ home one night after a stressful week of exams in his second semester at UGA, Chang fell asleep at the wheel. He woke up in time to avoid a collision with a vehicle in front of him, but he left the road, struck a tree and severed his spinal cord. He was paralyzed from the waist down.

During the months in Atlanta’s Shepherd Center that followed, Chang decided to transfer to Georgia State’s renowned hospitality program. No more wasting time.

The Shepherd Center was also where he formed stronger bonds with the friend who would eventually become his business partner.

While Peter Chung and Sean Chang had known each other in high school, Chung acknowledges they weren’t particularly close at first. But when he heard about Chang’s accident, Chung felt compelled to visit his friend.

As their friendship grew and Chang began to discuss transferring to Georgia State, Chung, who was attending Georgia Tech, suggested the pair share an apartment in Atlanta.

Chang and Chung moved into what would become the incubator of Mukja in 2017, and Chang threw himself headlong into his studies and his cooking, using the apartment’s kitchen to hone his skills.

Chang kept refining the recipe, experimenting with different cuts of chicken, combining flavors from his and Chung’s ancestral home of Korea and testing his creations on frequent visitors to the apartment.

“I was working in the restaurant industry to pay for school and had chef friends come over,” Chung said. “All of them were shocked at how good it was, coming from someone without formal training.”

The pair were convinced they were onto something with potential. 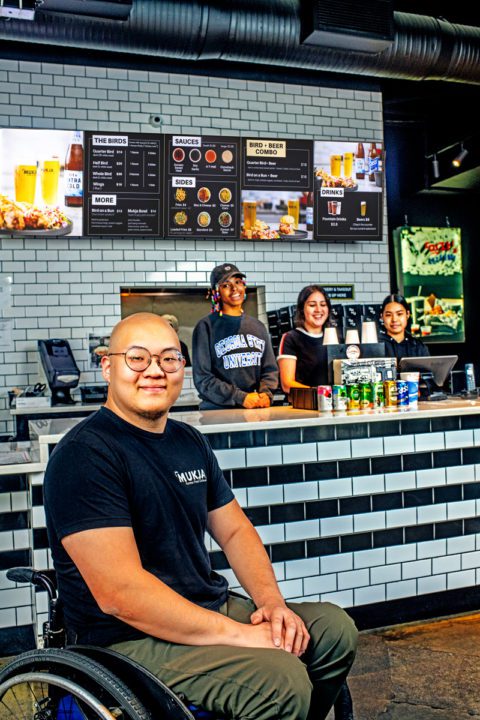 As the concept for Mukja developed, Chang discussed his ideas with professors inside and outside of class. He tapped their well of knowledge on kitchen layout, location selection and other topics as if they were “built-in consultants,” said Debby Cannon, director of the Cecil B. Day School of Hospitality Administration at the J. Mack Robinson College of Business, and one of Chang’s professors.

Cannon, who received the GRA’s Lifetime Achievement Award the same night Chang was named Rookie of the Year, said she and other professors were more than willing to share what they know.

One of those built-in consultants was Clinical Assistant Professor Kyle Hight (B.B.A. ’12, M.S. ’14), who racked up 14 years in foodservice before joining the Day School, where he specializes in restaurant operations and entrepreneurship.

“Sean had a singular focus, and he knew what he wanted,” Hight said. “At least every week, we were discussing his ideas in detail. I was always supportive of the idea because there are a lot of fried chicken places out there, and fried chicken is a big deal in Korea, but no one had really bridged the two. It just made a lot of sense.”

By the time Chung and Chang graduated from their respective schools in 2019, they were well on their way to launching Mukja, which, in Korean, means “let’s eat.”

After searching for months for a location, they signed a lease in January 2020 for space in The Metropolis on Peachtree Street with hopes of serving a customer base of office workers and condo residents.

Weathering months of delays, Mukja finally opened Oct. 30, 2020, but faced the same hurdles as other restaurants. Office workers were still largely working from home, and indoor dining hadn’t yet bounced back.

“We didn’t know what sales would be, opening into the pandemic,” Chang said. “We were like, ‘This might fail.’ Everything that could go wrong went wrong. Our target market just wasn’t there.”

The restaurant faced rising food costs, COVID-induced worker shortages and even an ill-advised break-in attempt on its cashless cash registers, but by earlier this year, Mukja had found its footing. Office workers returned to Midtown, residents were dining out and a marketing campaign began paying dividends.

“If you serve a quality meal and give good customer service, people will find value,” Chang said. “Our regulars have really championed us and helped bring in new customers. Every day, more people are finding out about us.”

And though Chung bowed out of the partnership earlier this year to take a job in corporate finance, he and Chang are as close as ever, still often sharing a dinner table.

“It’s strengthened our friendship to have done this together,” Chung said of starting the restaurant. “For Sean, it’s personal. He’s willing to serve others no matter the cost to himself. It doesn’t matter where you come from — if you’re at his table, you’re family.” Nearly three decades after completing his M.S. in Finance, CFO Jim Tait still refers to his class notes when he needs advice.

Ever heard of “Wordle?” Child’s play. Try Georgia State’s new game and see how many tries it takes to discover the word.