That’s the time it has taken the light from a far-off galaxy to travel to the giant aperture of NASA’s James Webb Space Telescope (JWST).

The images revealed this week from the JWST are awe-inspiring and stunning — and game-changing for the field of astronomy, said Misty Bentz. The Georgia State astronomy and physics professor already sees the possibilities for astronomers to understand the formation and life cycle of untold galaxies in deep space.

Bentz is principal investigator for a NASA Early Release Science Program involving astronomers from across the globe who will have early access to use the James Webb for observations. 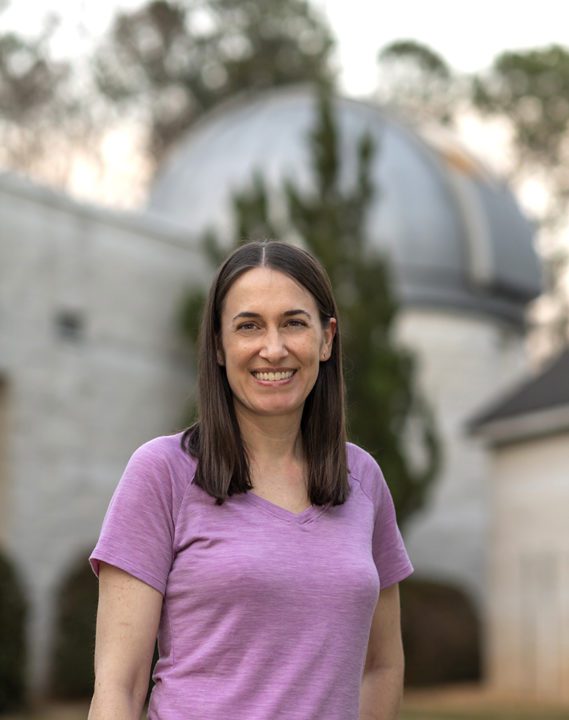 “Even with the images we’ve been shown so far, we’re already learning things about space we didn’t know,” she said. “We’re seeing light that has been traveling to get to us for 13 billion years. We are looking back in time at objects that were forming when our universe was in its toddler stage. This will change the field of astronomy as we know it.”

Led by NASA partnering with the European Space Agency and the Canadian Space Agency, the JWST was dogged by years of delays, as scientists grappled and honed the telescope’s instrumentation for the sun shields and mirrors that would be eventually folded like origami onto the rocket that lifted from Earth.

When the giant telescope finally launched into space on Dec. 25, 2021, NASA watchers let out a collective breath of relief. After six months of instrument checks and commissioning, the first science images revealed incredible sights, including galaxies being formed billions of years ago.

“Now that I have seen the first images and data from the JWST, I’m relieved that the telescope and instruments are working so well,” Bentz said. “And I’m joyful to be present in this moment and part of the community of explorers seeking to understand our place in the universe as well as ourselves.”

For the past 30 years, the Hubble Space Telescope has been the gold-standard for astronomers to view deep space. The James Webb takes it to another level, said Jay Dunn, an associate professor of astronomy and physics at Georgia State’s Perimeter College.

“With its smaller aperture, it took Hubble a couple of weeks to do a deep field image. It took the James Webb a little over 12 hours to capture the same images,” he said. “It has six times more light gathering power than the Hubble.”

Like Superman with X-ray vision, the infrared capabilities of the JWST have the ability to peer into dusky clouds of space and see galaxies and stars that were previously invisible to the Hubble’s mirrors.

The JWST also is opening the opportunity for Bentz and a team of scientists from across the globe to observe a supermassive black hole 60 million light years away. Bentz’s team is just one of 13 science groups worldwide to gain early access to the telescope.

The group will be looking at the activity surrounding a supermassive black hole and study the stars moving around the black hole itself, she said.

In December, the gigantic space telescope, controlled by scientists at the Space Telescope Science Institute in Baltimore, will point at the coordinates that Bentz and her team have requested. The telescope will then transmit the data it collects to a deep space radio transmission network on Earth.

“Sometime in December I’ll get an email that’ll say, ‘You’ve got data,”’ she said.

Then her team can get to work, analyzing the information and images.

Astronomers like Bentz and Dunn will still use the information being transmitted from the Hubble, which is working well after more than three decades in space. That telescope still has more unique discoveries for scientists to uncover, she said.

“They are two different tools, with different capabilities, to answer different types of questions and we can plan different experiments,” Bentz said.

But with the deployment of the JWST, astronomy students will see a change in what is being taught in the classroom, she said.

“We saw this happen when we started getting data from the Hubble years ago. As we get more immediate data from the JWST, the textbooks we are using are going to be out of date immediately as people find new discoveries,” she said.

“Eventually, our graduate students will have the opportunity to work with the James Webb data and be part of the discoveries themselves,” Bentz said. “It’s very exciting. I’m looking forward to diving into these data and uncovering all the surprises they hold.”

For more information on Bentz’s research on supermassive black holes, check out her podcast.

Misty Bentz is an observational extragalactic astronomer who specializes in ground and space-based imaging and spectroscopy. Some of her research focuses on active galactic nuclei and supermassive black hole mass measurements.