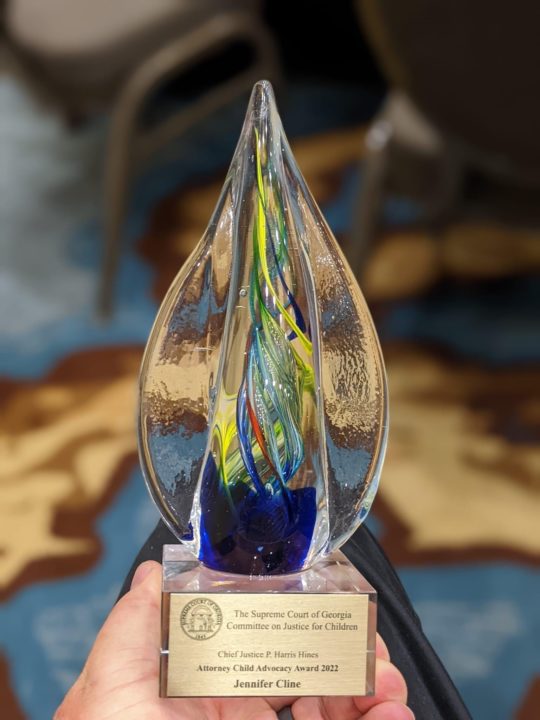 Cline began her legal career as a prosecutor. She moved into private practice in 2008 and later decided to focus solely on Juvenile Law. Since then, she has served as a parent attorney, child attorney, Superior Court Guardian ad Litem, and is now the Special Assistant Attorney General (SAAG) representing Rockdale County Division of Family and Children Services.

“I take pride in working towards the common goal of reunification of families in the safest way possible,” Cline said. “I enjoy collaborating with community partners to help find the best outcome for the families my client serves—keeping an open mind and a willingness to work outside the box for solutions.”

Cline decided to pursue law school after her experience as a probation officer, writing criminal sentences and testifying in probation revocation hearings. She enjoyed being in the courtroom and selected Georgia State University College of Law because of its reputation for producing strong litigators. She participated in the College of Law’s third-year externship program so she could begin practicing in a courtroom as soon as possible.

The courtroom is one of the many areas where Cline shines. Rockdale County Juvenile Court Judge Maureen Wood considers her a “fierce litigator, who is always prepared.”

“Jennifer’s influence and advocacy has been a tremendous help in transforming our Family Treatment Court, which has led to many families being reunited sooner,” Judge Wood said. “The relationship she has with other attorneys in our Court has been key to our ability to run an efficient and trauma-informed courtroom.”

Veronica Parrott, Director, Rockdale County DFCS, appreciates that Cline helps the agency understand how DFCS policies and procedures mirror the law and when they don’t.

“Justice Hines understood the significant responsibility of the courts to care for children who find themselves drawn into the justice system,” Justice Bethel said. “Recognizing child welfare practitioners like Jennifer is important. Their work is emotionally taxing and could easily go unnoticed, but is of vital importance to the future of our communities.”

Cline epitomizes the intention behind the prestigious award. She makes a difference through her advocacy, both in and out of the courtroom, like so many other Georgia State Law alumni who are committed to serving the public and leading positive change.

“This is a hard job, and to be recognized for doing it well means the world to me. It means people see the work, effort, and dedication I feel,” Cline said.

The Hines Award honors the late Chief Justice Hines and those who, like him, are champions for child welfare and committed to advancing systemic and court improvement efforts. Each year, the Supreme Court of Georgia’s Committee on Justice honors one Georgia Division of Family and Children Services (DFCS) case manager and one attorney with the award.