Tamia Robinson (J.D. ’24) Works to Create an Organization for Students with Disabilities

Growing up, Tamia Robinson (J.D. ’24) didn’t find many people who looked like her in her small hometown in South Florida. Born with spina bifida, a condition that affects the spine, she is paralyzed on her left side and uses a wheelchair full time.

“There was not a large disability population, so often I felt very isolated. I felt like I was alone in my journey,” she said.

When she enrolled at the University of Florida, things began to change. She met other students who had similar experiences and challenges. Robinson got involved in the disability resource center at the university, which hosted panel discussions and events focused on disability advocacy. She helped campaign to make the university more inclusive, such as adding a pool lift to make the college pool accessible for all.

As Robinson began advocating more for herself and for others like her, she began to gain confidence.

“My confidence in my capability as a person with a disability grew,” Robinson said. “My love for advocacy also grew as I began to understand that I wasn’t alone.”

She decided she wanted to combine her affinity for advocacy work and law by pursuing a juris doctorate. 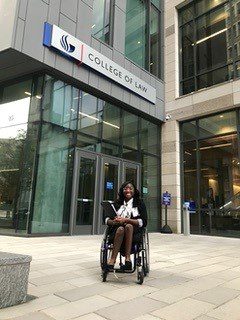 “Advocacy is a big part of being an attorney, and I believe that through doing disability advocacy and law at the same time I can reach more people,” she said.

However, as she looked around the legal landscape, she started to feel that same sense of being alone in her journey.

“At one point I was very discouraged because I didn’t see people who looked like me in the legal space that I’m trying to get to,” she said.

Having visibility and representation is important, especially among a smaller community, Robinson said. That’s why she’s working to form a student organization for law students with disabilities at Georgia State University College of Law. 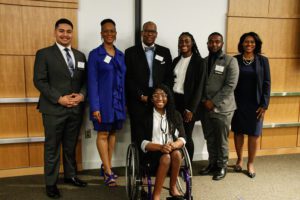 “Even though it is a very small population, I believe if we connect with each other and increase our network, we can increase our visibility in the community and on campus,” Robinson said. “And I want law students with disabilities to be able to say, ‘this organization at school has people like me who have been through the same things as me, and we can achieve really great things in my life.’”

Robinson expects the organization to be formed by the 2022 fall semester. She envisions the group hosting panel discussions with lawyers speaking about their experiences with having disabilities, as well as creating a network with other law schools. She also wants to bring awareness to the intersectionality of students with disabilities and other underrepresented populations, such as within the Black, Asian, or LGBTQIA+ communities.

She hopes the organization will facilitate discussions and provide learning opportunities for students about how to interact with clients with disabilities—such as the importance of using people-first language.

“I am so impressed with Tamia’s energy and enthusiasm for starting a student organization that would support and promote our law students with disabilities,” said Butler. “Through the group and its programming, students will be able to improve their awareness of all types of disabilities, visible and invisible, as well as their advocacy skills to champion universal design, for example.”

As a student with a disability, Robinson said her experience at Georgia State Law has been a positive one. With accessible automatic doors, ramps, and open spaces in classrooms, she hasn’t had any difficulty navigating her wheelchair to class. She’s also found that navigating the workload as a 1L wasn’t as draining as she anticipated.

“I went into law school thinking I wouldn’t be able to have a personal life, I would only be able to do law school full time, nothing else. But I’m realizing you can carve out time to do things that are important to you. I was surprised at how manageable it can be when you create a schedule,” she said.