The Belgian Economic Mission to the United States toured the Creative Media Industries Institute in an event highlighting the video gaming industry in Belgium and Atlanta. Members of the delegation toured CMII’s advanced volumetric and motion-capture production studios, and Belgian gaming companies presented their industry’s work to Atlanta-based game makers.

The Belgian Economic Mission kicked off its seven-day visit to the U.S. in Atlanta on Sunday, with stops scheduled later this week in New York and Boston.

“Georgia is a world-class destination for all digital entertainment sectors with a dynamic community of artists, programmers and gamers,” Georgia State President M. Brian Blake said. “We’re creating the next generation of digital storytellers through emerging technology and making this technology accessible to all of our students. We are very happy to host these Belgian companies while mingling with some of our superstars from the gaming and esports world.” 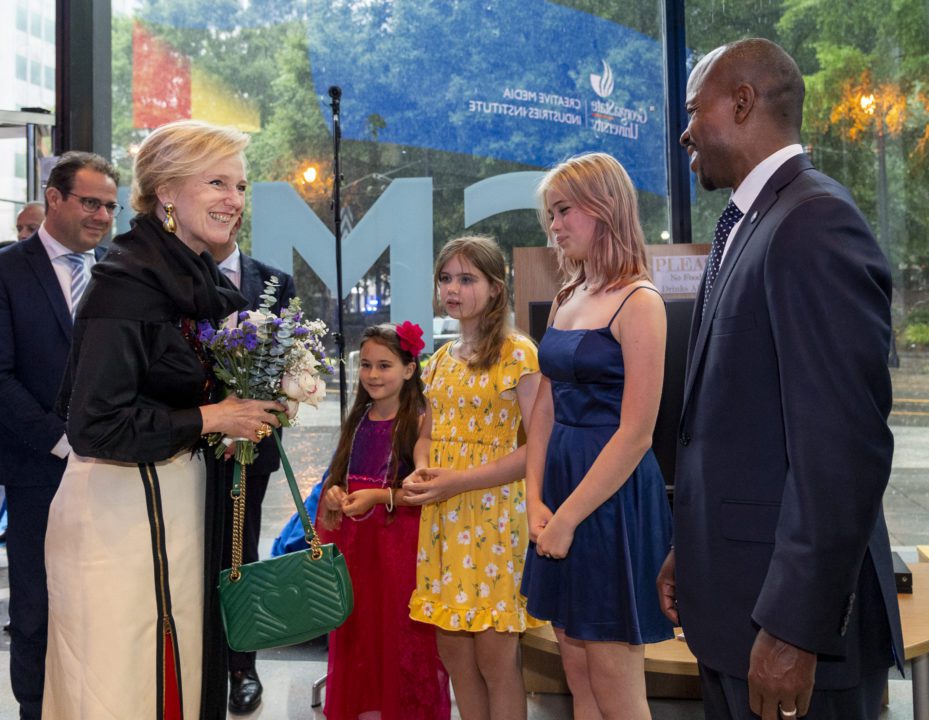 Widely regarded as the esports capital of the U.S., Atlanta hosts 39,000 gamers each year for the world’s largest digital festival — DreamHack — and the state of Georgia’s economic incentives and skilled workforce have attracted more than 50 of the world’s leading gaming companies and teams, according to the Georgia Department of Economic Development.

With more than 12,000 workers directly and indirectly employed by gaming companies, the industry has had a $550 million economic impact on the state.

In Belgium, gaming is a €600 million market, according to GameInsdustry.biz. Jan Jambon, minister-president of the government of Flanders and Flemish minister for foreign policy, culture, digitization and facilities, noted Belgium is home to a rich variety of game companies and service providers, designing products for PC, console, mobile and streaming platforms.

“I am very proud that this is the first time ever that our growing video game industry is put in the spotlight during a Belgian economic mission,” Jambon said. “The choice of Atlanta for the location of this occasion seems more than logical to me for two important reasons. Atlanta is a mecca for games and developers — a hotbed for all digital entertainment sectors. Secondly, and very importantly, Flanders and Atlanta share the same goal. We want to bring more diversity into video games. This encounter between our two ecosystems will truly lead to future collaborations.”

During Monday’s event, CMII faculty demonstrated the institute’s advanced volumetric capture technology by creating an avatar of Princess Astrid, which was presented to her during a tour of the facility. Belgian female game developers also discussed diversity, equity and inclusion in the industry in a talk titled “Princesses Don’t Need Saving.”

At the conclusion of the visit, Blake met with representatives of two Belgian universities — Howest and Thomas More — to sign memoranda of cooperation aimed at strengthening scientific, technological and educational ties among the schools.

“This is the first international collaboration like this we’ve looked at here at CMII,” said Brennen S. Dicker, the institute’s executive director. “The end goal is to give students experiences overseas that will broaden their minds not only with the cultural experience, but show them how other universities and companies work outside the United States, specifically in gaming.”