Melissa Davies (J.D. ’22) A Whisper of Hope for Georgia’s Courts

Melissa Davies (J.D.’22) has a big heart and her cat’s paw print on her ankle. After her graduation from Georgia State College of Law, Davies will take on a new mission—working as a judicial clerk. 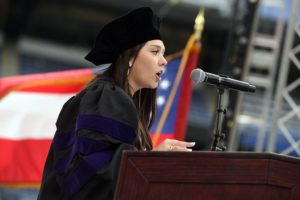 Melissa Davies (J.D.’22) delivers the student address at the College of Law hooding & commencement ceremony on May 13, 2022.

As president of Georgia State Law’s Student Bar Association, Davies has set out to build a more compassionate court system for victims of substance abuse disorders who find themselves on the wrong side of the law.

Growing up, Davies’ family only had money for the essentials. Her parents, high school graduates, did everything they could for Davies and her brother, especially when it became clear that Davies’ academic ambitions surpassed their own experience. When Davies entered the prestigious International Baccalaureate (IB) program at Campbell High School in Smyrna, Georgia, she encountered a world of wealth and privilege that intensified her drive to become a voice against the injustices of inequality.

“There were a lot of students with more money, more privilege,” she said. “It was a drastic difference.”

Davies wanted to make a difference too. She attended the University of Georgia on a Hope Scholarship, where she pursued her longtime dream of becoming a lawyer. She took two classes with a professor who formerly served as an investigator with the Athens-Clarke County Police Department. This professor introduced Davies to a judge for the state’s DUI/Drug Court Program.

“I loved it,” she said. “I immediately knew I could connect with these people because they came from all different walks of life. I called and asked to be an intern for the DUI court, specifically the accountability court. They said, well, we’ve never had an intern there. I ended up working for them for two and a half years.

“Their mentorship meant so much to me, because they went out of their way to try to help me. I want to do that for other people now.”

If she could change Georgia’s legal system, Davies would make sure the state’s accountability courts got the money needed to help treat and heal people in the system.

“Advocacy and funding are so important,” she explained. “A single mom might have substance abuse issues while she’s trying to work two jobs, be in this court, get help, and raise two kids by herself. She doesn’t necessarily have the money to pay for treatment, but she still needs help.”

Davies’ undergraduate achievements rewarded her with several law school choices. Georgia State Law appealed to her most because of the kindness she found among her fellow students.

“I didn’t want to go to a law school with a competitive, cutthroat environment, because that’s just not me,” she said. “I want everybody to have support. Georgia State was the right place for me.”

After graduation, Davies will serve as a judicial clerk for Federal Magistrate Judge Brian K. Epps in the Southern District of Georgia for two years.

And about that paw print?

Two years ago, Davies rescued a senior cat from Marietta’s Best Friends Animal Society, where she volunteered with her mother. The cat’s name was Whisper, and she served as a gentle companion through Davies’ time in law school. She felt intense sorrow when an illness took Whisper’s life in March.

“I loved Whisper and cared for her so much. I got a tattoo of her paw print on my ankle. It’s really special and meaningful to me.”

Her love for her cat mirrors her love for people. For Melissa Davies, love means never forgetting those who need help—and working until the end to make sure help reaches them.