Davynn Brown (J.D. ’22) A Passport to a Better America

Growing up in a Black neighborhood in East Atlanta, Brown and her mother were “joined at the hip,” she said. Her father taught her to read and write. Her extended family cheered her on, including her grandparents, who had only an 8th-grade education. As South Dekalb High School’s valedictorian, Brown resolved to give back to her family and community by becoming the first in her family to go to law school.

When Brown received her surprise undergraduate acceptance to Yale University, her mother leaped into action.

“She told me, whatever we have to do, we’re going to get you there,” Brown said. “At Yale, everybody studies abroad. It’s built in. So my mother went and took me to get a passport that day. She said, whatever everybody else has, you’re going to have it too, okay? We’re going to figure it out.”

Brown figured out more than just her Yale experience. While completing her undergraduate degree in African American studies, she chose Singapore as her destination abroad. Immersed in a landscape of vibrant cultural landmarks and awestruck tourists, Brown remembered her upbringing in East Atlanta.

“I actually declared my major in Singapore, because I realized there aren’t whole programs dedicated to people coming to study my culture. People are not flying in from across the world to spend three months studying my people.”

Brown dreamt of showing the world the best of Black America. Her next step was clear—she had to return to her roots and learn the legal and entrepreneurial tools to make her vision a reality.

At Georgia State College of Law, she found a foundation. Better still, she again immersed herself in serving the thriving Black community in the city.

Brown became vice-president of the Black Law Students Association (BLSA). “It’s my baby, my pride and joy. One of my most rewarding moments this year was seeing the dynamic of the group change and blossom. We really were able to build community in a way that we hadn’t before.”

BLSA recently held its graduate ceremony, where students offer awards to faculty and staff. One staff member, York Singleton, said in his awards speech that this year’s event hosted the most BLSA students and graduates he had seen in 35 years of service.

“I was in charge of that,” said Brown, describing her proudest moment of law school. “I really worked hard, because I want everyone to know we’re here.” 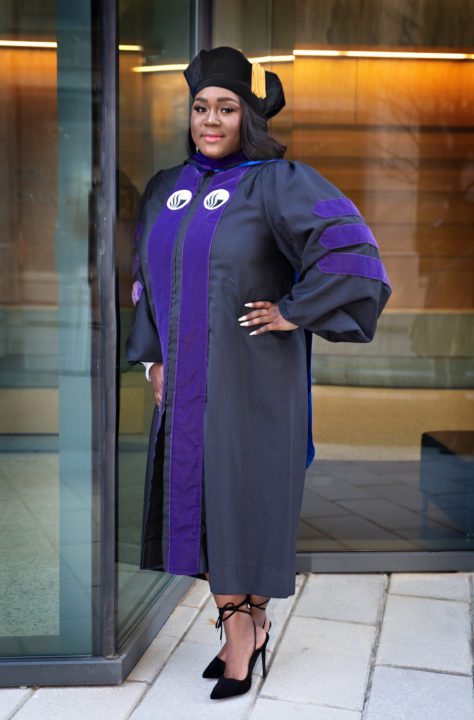 Brown is looking forward to graduation.

“Eventually, I’d love to own a bunch of small businesses in my community,” she said, painting a picture of her entrepreneurial vision. She aims to make Atlanta’s Black communities into destinations for travelers who can immerse themselves in the once-ignored cultural heritage of Atlanta’s African American community.

Connecting people is Brown’s superpower, and the human element is at the heart of her mission. Her business vision is one of service—the mark of every true entrepreneurial visionary. “If you haven’t noticed, I just love Black people,” Brown says, her face aglow with affection for the people who have nourished her many gifts.

“I wanted to go to law school to build a skill set that will be useful in this world,” she said. “I can’t help anyone, can’t make a difference, can’t build an empire if I don’t have the necessary skills.”

At Georgia State Law, Brown found those skills—crafting herself a passport to the future she now sets out to build.