When Deah Warren (J.D. ’07) received a call from Gov. Brian Kemp earlier this year, she gasped and immediately teared up.

“I was so emotional,” she said. “I was overjoyed.”

Kemp called to appoint Warren as Superior Court Judge of the Douglas Judicial Circuit—making her dream to serve on the bench come true.

Warren, who was the chief assistant district attorney for the Douglas County District Attorney’s Office, was sworn in on March 16, 2022. Her appointment filled the vacancy left by Judge David Emerson, who retired. Warren will serve for two years and then face an election in May 2024. 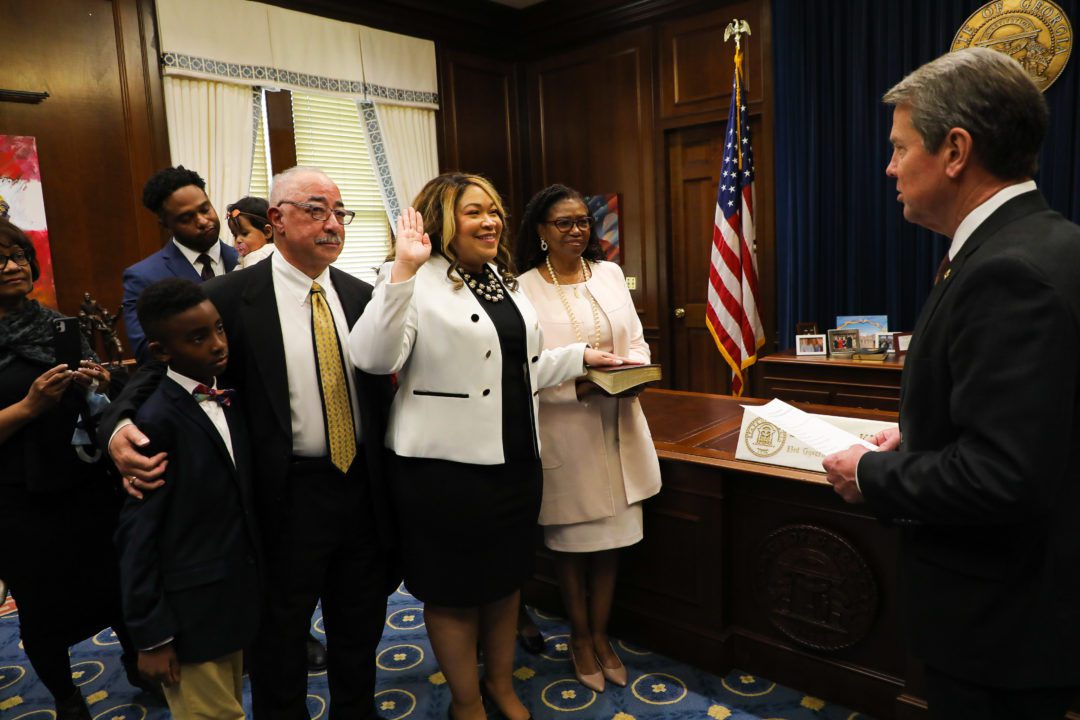 Deah Warren (J.D. ’07) was sworn in as Superior Court Judge of the Douglas Judicial Circuit on March 16, 2022. Warren’s family and friends traveled from Chicago, Texas, and Memphis to celebrate with her. (Photo Credit: Office of the Governor)

Becoming a judge had been a goal of Warren’s ever since she was a student at Georgia State Law. Her participation in the Student Trial Lawyers Association (STLA), the Black Law Student Association’s trial team, and an internship with the Fulton County Superior Court ignited her passion for being in the courtroom.

“Those experiences really sparked something in me,” she said. “I went into prosecution because I loved the courtroom. I love the impact it has on people’s lives and doing something that is rewarding.”

As a judge, Warren hopes to help build trust and confidence in the judicial system.

“I want those who enter my courtroom to feel comfortable and know that they will be treated fairly,” she said. “I’m going to do the research, and I’m going to treat you with dignity and respect. It’s not going to be a circus of someone trying to promote an agenda—I want to be someone that all of the public can respect.”

She also wants to tackle the backlog of cases that has built up since the COVID-19 pandemic forced courts to halt proceedings for a while.

“People’s lives are hanging in the balance until the cases are handled, and I want to do what I can to get those resolved efficiently while still maintaining the fairness of the process,” Warren said.

André Hendrick (J.D. ’07), a classmate of Warren’s, said the public will benefit from her service as a judge. “She is smart, capable, experienced, and hard-working,” he said.

As an STLA teammate, Warren showed great skill, poise, and determination, said Hendrick, a partner at Holland and Knight.

“She was unflappable,” he said. “Regardless of the circumstance, she conveyed a calm confidence, which will serve her well on the bench.” 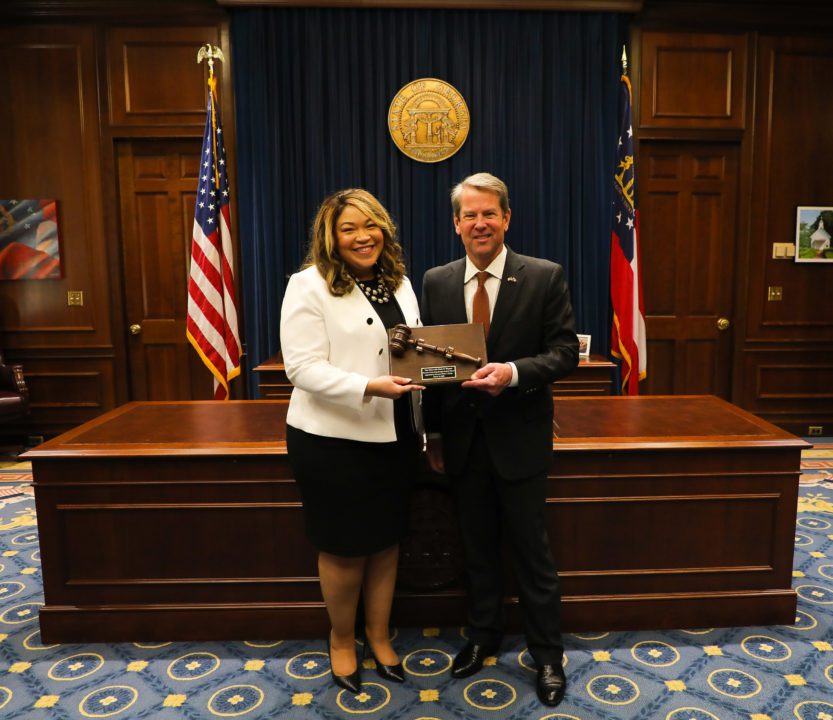 Deah Warren (J.D. ’07) and Gov. Brian Kemp pose for a picture during Warren’s swearing-in ceremony on March 16, 2022. (Photo Credit: Office of the Governor)

The Georgia State Law class of 2007 established strong bonds that have continued throughout the years, said Warren.

“We keep in touch with one another,” she said. “When news of my appointment went live, I heard from so many people. We’ve always been close-knit.”

“Georgia State Law attracts hard-working and well-rounded people,” Warren said. When she served as an STLA coach and returned to the school to speak to classes, she was impressed with the caliber of students.

“Georgia State looks at students more holistically than just GPA and LSAT scores, and I think that leads to a better experience while in the law school, and it contributes to a better ‘product’ in their graduates. We are out in the world doing amazing things—I’m always proud of the school.”

For current law students, Warren offers sage advice: Do something that scares you.

“If I had a dollar for every trial I started while my stomach was in my throat, I’d be pretty wealthy,” she said. “But doing things that scare you will give you good experience. And also, maintain and nurture your relationships. I would not be where I am without good relationships. Do good work and maintain your relationships, and you’ll go far.”