CLARKSTON, Ga.—Larry James will become a college graduate this week—and he credits his disabled twin brother as well as his mom, with inspiring his success.

“I’m so glad that I kept pushing and didn’t give up,” James said of balancing classes at Georgia State University’s Perimeter College with serving as a certified caretaker for his sibling Terry.

“It feels wonderful,” he said. “It feels so good because it’s been a lot of challenging work.”

James is among an approximate 748 candidates set to receive their associate degree from Perimeter on Friday, Dec. 17, during an in-person commencement ceremony at Georgia State’s Center Parc stadium.

He studied health sciences professions, made the President’s List several times and wants to someday help people like Terry who have special medical needs.

Fraternal twins, Larry and Terry were born two months premature in Germany. At six weeks old, Terry suffered a stroke and later was diagnosed with cerebral palsy. He gets around in a wheelchair, can see only a little and deals with seizures and scoliosis.

Despite these challenges, James says his brother—who loves listening to music, everything from R&B, rap and “a little bit” of country—is like a hero to him.

“He still lives life like there’s nothing wrong,” James said proudly. “He’s the best fighter I know—that’s my friend and he keep me going.”

It’s that fighting spirit that finally motivated James to get serious about his studies at Perimeter. 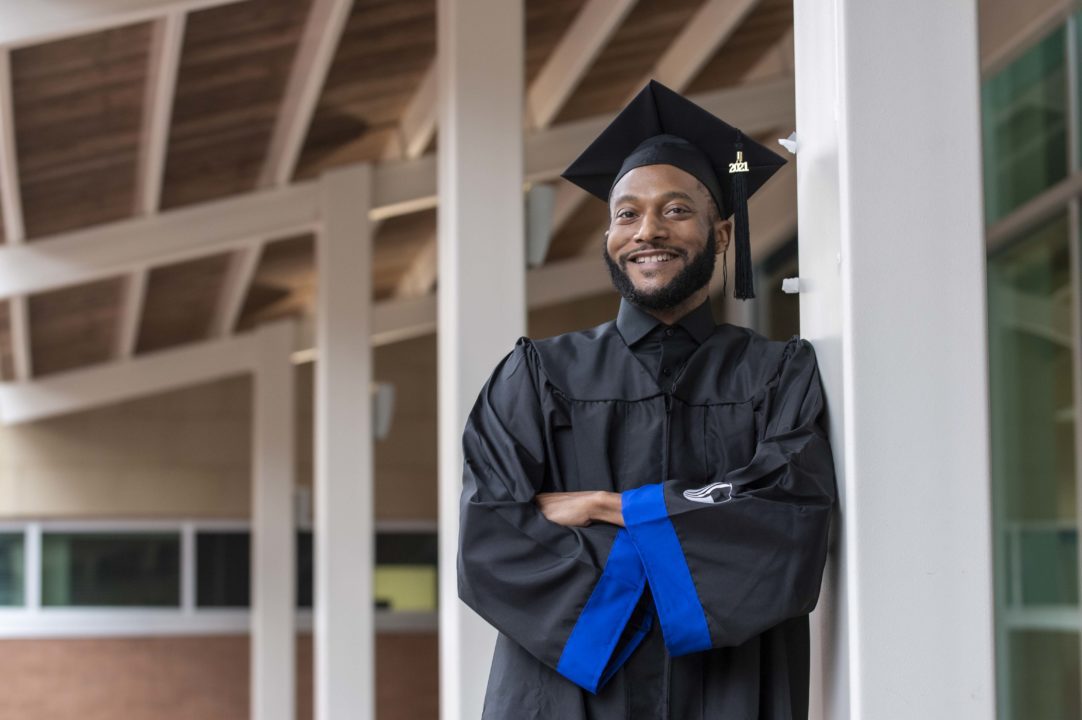 Now 36, James initially enrolled at Perimeter after graduating from high school in 2004, but said he lacked the discipline to do well and also got distracted because the family couldn’t find proper care for his brother during the time. He eventually quit then worked a variety of jobs and “partied” a lot, before deciding to give college another try.

Although college didn’t work out the first time around, James always has been consistent with his dedication to his twin. He has shared caretaker responsibilities for Terry with his mother since grade school.

James recalls his hardworking, single mom, now a nurse, having to leave early for work and helping his brother get ready for school.

Even so, James managed to participate in quite a few extracurricular school activities including orchestra, marching and jazz band, German Club and track. He would even sometimes bring Terry along for fun, like to school concerts.

James tears up when reflecting on his brother’s disabilities.

“We show each other support,” he said.

James isn’t sure if Terry will be able to attend his graduation ceremony, but he is certain about the influence his brother has had on his success.

“That’s part of the reason I kept going in school, because I’m not only doing this for me, I’m doing this for them,” James said of dedicating his degree to Terry and his mother.