On With the Show

ATLANTA — Nearly three dozen Georgia State students have been working this semester on a 12-episode TV series filmed at the famous southwest Atlanta studio once owned by Tyler Perry.

Produced at Areu Bros. Studios near Greenbriar Mall, the show “You Got Next with Elvin Ross” has been giving students in the Creative Media Industries Institute (CMII) an inside look at what it takes to produce a variety show series.

From wardrobe to lighting to marketing to reimaging the show’s logo, executive producer, co-creator and host Elvin Ross said the students in lecturer Ola Gardner’s class have been an integral part of its creation.

Ross is a partner at the studio and known for composing the music for Tyler Perry hits like “Diary of a Mad Black Woman” and “Madea’s Family Reunion,” among others. Studio owner Ozzie Areu, who with his brother Will founded Areu Bros., was president of Tyler Perry Studios when Perry moved the operation to the old Army base Fort McPherson. That’s when Areu bought the studio he used to run. 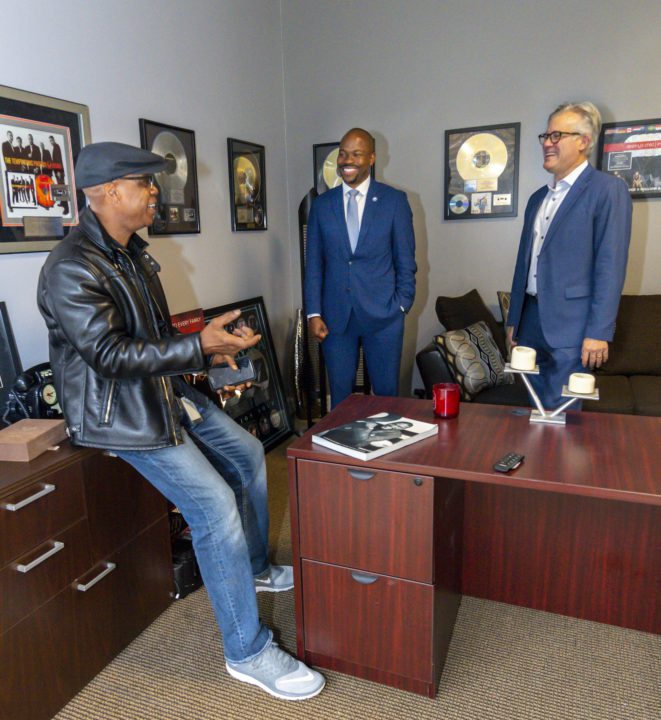 Ross said he and Gardner had been discussing ways to involve her students in entertainment production and entrepreneurship when Gardner was program chair of media at the Art Institute of Atlanta. By the time Gardner moved to Georgia State’s CMII this semester to a teach a new-business development class, Ross was ready to start work on “You Got Next,” and Gardner’s students were invited to participate.

The show is a variety series focused on the skills and talents of area K-12 students, and has a particular focus on science, technology, engineering and math (STEM) topics, Ross said.

“Ola’s class, they are so talented,” he said. “It was clear to me the class had a vision for what ‘You Got Next’ could be.”

Gardner said students working on the production have been able to contribute in a variety ways based on their interests. Some are helping with marketing. Some students focused on fashion eagerly joined the wardrobe team led by boutique owner LaToya Mason. Others have worked with lighting crew members and set creators, and on music for the show with Tyler Perry music director Ronnie Garrett.

“We were able to find a place for each of the students where their interests were,” Gardner said. “And they’re getting this great mentorship from seasoned veterans in their areas.”

In all, 35 students in Gardner’s class have been part of the production, which Ross said has a first-look commitment from PBS station KLCS based in Los Angeles.

“It’s definitely something different than being in a lecture or doing modules,” said senior media entrepreneurship major Noah Clement. “It’s hands on. It’s in the real world.”

“I was one of the members of the marketing team,” said Jeff Nosiri, also a senior media entrepreneurship major. “Elvin basically gave us permission to take over his entire social media — from Instagram to Facebook to LinkedIn to TikTok. I can see myself being in the industry because I know what to do now.”

Getting that experience — knowing what to do as part of a production — is exactly the point, said CMII Executive Director Brennen Dicker, who toured the studios recently with Georgia State President M. Brian Blake.

“To see all the students here, getting hands-on experience, to me it really connects our curriculum to industry,” Dicker said. “It’s really crucial for them to get that experience, whether it’s through a class like this or an internship program.

“The connections and the networking are so important and so crucial for students. They also get to see people like themselves in these positions, so it makes it real for them. This opens the door for them a bit and shows them what’s possible.”

Blake said preparing students for careers through experiences and connections like those made at Areu Bros. is among the university’s biggest priorities.

“When you think about experiential learning opportunities, where students can put what they learn into practice, this is right at the heart of it,” Blake said. “Creating and interacting with other producers — it’s hard to simulate that. And it’s great to know that students are bringing a perspective that’s new and innovative to this practice.”