Dean LaVonda Reed is making history as the first Black woman to lead Georgia State University College of Law. Her experience rising the ranks in both academia and the legal field create a strong foundation to lead in achieving the College of Law’s goals. Meanwhile, her values and dedication to academic excellence and diversity align with its mission.

Dean Reed hit the ground running at the College of Law, ensuring a successful start to the fall semester. Here, we learn about who Dean Reed is, how she’s already been able to make her mark in legal education, and why she’s not slowing down anytime soon.

Dean LaVonda Reed was born in Virginia and spent her childhood traveling all over the world. Reed’s father was commissioned as a second lieutenant in the Marine Corps and went to Vietnam for his second tour of duty when Reed was just a toddler. After his tour, Reed and her mother followed her father’s military career across the continental United States, Hawaii, and Japan until she graduated from high school. Her father ultimately retired at the rank of Colonel ending a successful and storied career as an infantry officer. Reed’s mother pursued a teaching career and is now a retired mathematics teacher.

Frequent relocations taught Reed resilience and gave her an appreciation for diversity within the U.S. and how it related to the rest of the world.

“I saw how prejudices affect people of color particularly when they’re traveling across the world,” Reed said. “I developed respect for other cultures and discovered new ideas that inspired my creativity. This exposure also gave me a greater sense of pride and patriotism as an American traveling the world during that time.”

Reed cherished every moment she could and learned how to embrace new opportunities.

“It can be scary to go into uncharted territory, but you should always be open to experiencing new things,” she said. “That is part of growth. Seizing opportunities when they are presented to you is not easy, but most often, you find the experiences very rewarding.” 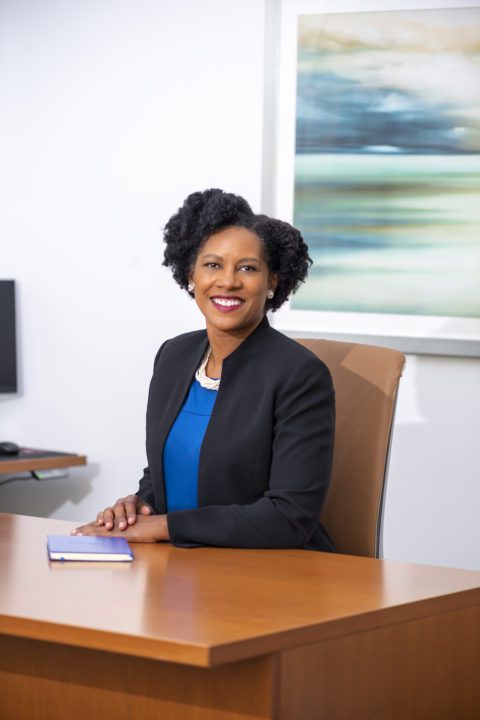 Dean LaVonda N. Reed at the College of Law

Path to Becoming a Lawyer

Reed fell in love with teaching others by watching her mother teach mathematics across the world. She was deeply inspired by the many strong Black women she saw as her mother’s peers and colleagues, many of them in STEM fields.

“I took for granted that I knew a lot of ‘hidden figures’ – adopted aunts who were teaching biology, chemistry, and math,” Reed said. “I thought I would be a teacher to follow in their footsteps.”

While it has come full circle with Reed making her mark in academia, she developed many transferrable skills though a diverse career path. She earned a Bachelor of Arts in Economics the University of Virginia before moving to Atlanta for a management training program at Bank South.

Her time in banking expanded her skills in problem solving, teamwork, leadership, and a passion for helping others. She realized that she wanted to become a lawyer and subsequently attended University of Southern California Gould School of Law in Los Angeles.

After graduating from law school, Reed served as a judicial clerk for the Honorable Donald W. VanArtsdalen of the U.S. District Court for the Eastern District of Pennsylvania and practiced law with the international firm of Paul Hastings LLP. While in practice, she represented businesses and financial institutions in various aspects of communications and corporate law, including representation before the Federal Communications Commission.

Meanwhile, her life-long dream of teaching others was still in the back of her mind and after several years, began serving on the faculty of the Louis D. Brandeis School of Law at the University of Louisville.

“It’s a wonderful opportunity to be a legal academic where you are paid to think, ask questions, research, and share your knowledge with others,” Reed said. “It’s so important that we protect that freedom in a university. I think that’s what makes this career such a privilege.”

Reed was well poised to take over the helm at Georgia State College of Law. She is coming to the College of Law after 15 years on the faculty at Syracuse University and the final six years as the Associate Provost for Faculty Affairs. She thrived in her role which included hiring, professional development, policy creation and enforcement, the promotion and tenure process, advancing diversity, equity, inclusion, and accessibility initiatives and more.

As an academic, her teaching and scholarship are in the areas of wills and trusts, property, and communications regulatory law and policy. Her priority for student success, and dedication to access and affordability for students from underrepresented backgrounds, is in line with the College of Law’s efforts.

She considers it a responsibility to positively represent those who came before her who weren’t afforded similar opportunities. She also prides herself on being a good role model for students, staff, and faculty. As dean, she will use her platform to educate others on the experiences of people of color in academia.

“It’s a huge honor to be the first,” Reed said. “It’s a reminder too, that my generation is really the first generation that grew up in an integrated society. My parents went to segregated schools. My mom who grew up in Virginia could not go to the University of Virginia. My dad grew up in South Carolina and could not attend the University of South Carolina. Despite those limitations and indignities, they pushed forward to provide opportunities for future generations.”

Reed continued, “One generation later, we are here. Each generation makes steps towards equality. It is exciting to be in a position where I can make a positive impact on the lives of young people and attorneys.”

Building a Future to be Proud of

Reed is excited to be back in Atlanta, the city where she began her career. She is settling into the vibrant community with her family and embracing the wonderful opportunities for Georgia State Law.

“To be at a law school at this moment in history is exciting considering the multitude of changes happening across the world,” Reed said. “Lawyers are instrumental in solving the toughest problems and developing a better future. I am honored to be a part of the Georgia State network and to provide opportunities for future lawyers, scholars, and thought leaders.”

As dean, Reed’s first goal is to ensure the safety of students while still being in the midst of a pandemic.

“It is important for our students, faculty, and staff to feel safe and comfortable,” Reed said. “Access to our building, technology, and one another is a wonderful foundation for academic success. The entire staff and faculty have worked hard to open the building and to welcome the students into a safe learning environment where they can thrive.”

Additionally, she looks forward to developing more scholarship opportunities for Georgia State Law students. She sees the advantage of being in the heart of Atlanta, footsteps away from federal courts and administrative offices, major law firms, large nonprofits, and Fortune 500 companies. Reed believes by challenging and expanding our student’s perspectives, we are equipping them with the critical thinking and problem-solving skills that will set them apart as lawyers – without saddling them with crushing debt.

“One of our highest priorities is to generate scholarships for students with potential donors,” Reed said. “For first generation students especially, it’s such a value to be able to have the quality, excellent education that we give here at Georgia State and have that relative financial freedom on the backend.”

Reed feels like she is right where she’s supposed to be and sees is no limit for where the College of Law can go next.

“I am standing on the shoulders of previous deans and faculty members that have had a vision for this school and my responsibility is to continue to build positively on the legacy that they’ve already built, and I take that seriously,” she said.

Just eight months into her deanship and Dean Reed has made significant progress.

In fall 2021, she signed a letter of support – along with other law school deans – for the White House and Department of Justice’s initiative to address the housing and eviction crisis in the U.S. This project allowed College of Law students to work with the Atlanta Volunteer Lawyers Foundation (AVLF), the Atlanta Legal Aid Society, and the Georgia Legal Services Program through the Center for Access to Justice’s Pro Bono program.