When Caroline Williams made a cross-country move to Atlanta to pursue her Ph.D. at Georgia State, she was on a quest to gain experience doing research on emerging infectious diseases.

“At the time, I really was fascinated by Ebola and those really highly pathogenic and emerging viruses,” Williams said. “The program itself got me to apply, but the research was a big selling point.”

The native of Stockton, Calif. is now the first in her family to earn a Ph.D. and pursue a research career in the sciences. This summer, she earned her Ph.D. in Translational Biomedical Sciences ahead of schedule in four years, becoming the first graduate from the Institute for Biomedical Sciences’ doctoral program.

Not afraid of a challenge, Williams completed her dissertation on two newly emerging viruses, SARS-CoV-2, the virus that causes COVID-19, and Mengla virus, a newly identified pathogen in the filovirus family, with guidance from her mentor, Dr. Christopher Basler. Her research experience in high biosafety level labs and publications in top tier scientific journals helped her to land a postdoctoral research fellowship at the University of Florida after graduation. She’s on her way to having a promising research career as a virologist.

Initially, Williams was studying Ebola and Marburg viruses for her dissertation, but the pandemic and the global race to understand SARS-CoV-2 caused a shift in research focus. It was challenging at first, but she was able to achieve some exciting results.

“We found two major pathways that we looked further into to identify their relationship to replication, and we found that they were indeed good targets for disrupting viral production. We identified VPS34 and fatty acid metabolism as targets for inhibiting SARS-CoV-2,” she said.

Williams published these findings in the journal Cell Reports in July.

Her dissertation also focused on Mengla virus, a newly identified filovirus that was discovered in China in late 2018. She and her colleagues looked at proteins in other filoviruses that are known to antagonize the human immune system and determined if these same proteins in Mengla virus use similar mechanisms to potentially cause pathogenic human disease.

Mengla virus was identified in a bat, which many believe is the animal host for filoviruses. Disease transmission from bats to humans has already occurred with Ebola and Marburg viruses to cause illness in humans.

“We wanted to determine if Mengla virus were to jump from bats to humans, should we be concerned that it could cause severe human disease,” Williams said. “One of the ways that filoviruses do that is through their ability to shut down parts of the human immune response. We looked at the antagonistic function of three main proteins in comparison to their Ebola and Marburg counterparts that we know block the immune response.

“We found that Mengla virus can antagonize the human immune system and shut down the human immune response, so there is the possibility that it could cause human disease should it be able to get into the human population,” she said.

Williams is co-first author of a paper published about this study in the Journal of Virology in June 2020. In total, she contributed to eight publications while earning her Ph.D. 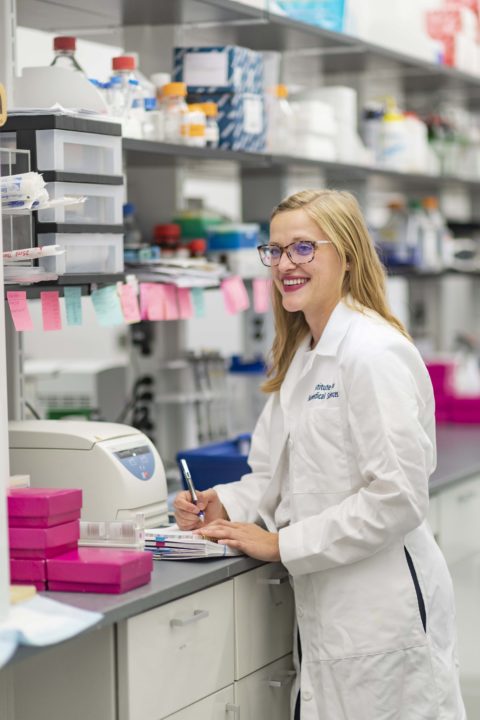 Before coming to Georgia State, Williams received her bachelor’s degree in biochemistry and master’s degree in molecular biology from the University of the Pacific. She was attracted to the nontraditional nature of the Institute for Biomedical Sciences’ Ph.D. program.

“We had science classes, and we learned the basic foundational science that we needed, but we also got to branch out and see the business side of it and actually talk to people who have gone through the process of taking things to the clinic and progressing the science from one level to the next,” Williams said. “I really enjoyed having that piece of it. This program incorporates business and law, and to translate biomedical discoveries from the bench to the bedside, that’s really important to know.”

Williams faced other unexpected challenges when earning her Ph.D., such as not being able to use a crucial microscope for almost six months because a new computer had to be shipped from France to support technological advances. However, she believes that her struggles were worth it.

“To really build that critical thinking base that’s so sought after in scientific research and actually manage your own projects, you need that Ph.D. background,” Williams said. “Not only does it help me in becoming a better scientist, but it also opens additional career possibilities for me.”

Williams is drawn to biomedical research because of its potential longterm applications.

“You’re typically doing something that is relevant clinically or public health wise,” Williams said. “Knowing that it could make a difference someday really is a big driving force behind my love for research. Biomedical sciences lets you do that. It’s very relevant research. It’s very meaningful research.”