As recognition of his excellence in health law scholarship and teaching, Paul Lombardo, the Bobby Lee Cook Professor of Law, was named the 2021 recipient of the prestigious Jay Healey Teaching Award. The award was presented to Lombardo at the 44th annual ASLME Health Law Professors Conference by colleague and Distinguished University Professor of Law Leslie Wolf.

For more than 30 years, members of the American Society for Law, Medicine & Ethics have honored the memory of Jay Healey, a beloved professor of health law at University of Connecticut Schools of Law and Medicine, with a teaching award in his name. Healey received the Health Law Teachers Award in 1990, which was renamed in his memory when he died in 1993. The award recognizes scholarship, passion for teaching health law, mentoring of students and other faculty, and being an inspiration to colleagues and students.

“Paul embodies the spirit of the Jay Healey Teaching Award, having dedicated his illustrious career in health law and bioethics to educating his students, his colleagues, policy makers, and the public,” Wolf said.

Erin Fuse Brown, Catherine C. Henson Professor and Director of the Center for Law, Health & Society said, “Paul is a such a deserving recipient of this incredible honor, which is in essence a lifetime achievement award by the health law academy for excellence in teaching and contributions to the field. We are lucky to count him among our faculty at Georgia State.” 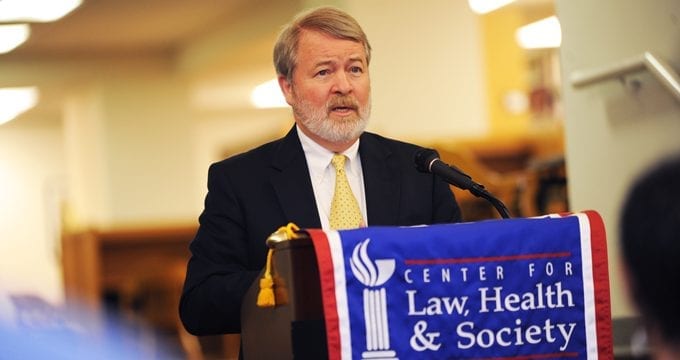 As a member of the Center for Law, Health & Society, Lombardo teaches courses in Genetics and the Law, the History of Bioethics, Mental Health Law and the History of Public Health Law. Last fall he also taught the course Legal History of the U.S. Eugenics Movement, an area in which he has written extensively, including his book, Three Generations, No Imbeciles: Eugenics, the Supreme Court, and Buck v. Bell.

“I first heard about the health law professors award some three decades ago when my mentor at the University of Virginia, Walter Wadlington, received it,” Lombardo said. “I am flattered to be able to follow him and so many other great teachers who have been honored this way.”

While presenting the award, Wolf spoke of the kindness and generosity Lombardo has for his students and colleagues, and his ability to convey the relevance of the issues and historical examples he studies to those around him.

“For example, Paul personally paid for a roadside historical marker in Charlottesville, Virginia, Carrie Buck’s hometown, to commemorate the 75th anniversary of Buck v. Bell,” Wolf explained. “The marker concisely describes the number of states with eugenic sterilization laws like Virginia’s, what happened to Carrie Buck, the Supreme Court’s decision upholding Virginia’s sterilization law, the 8,000 Virginians sterilized under the law, and the later evidence than Buck and others had no ‘hereditary defects’ the laws were intended to address.”

The nominations were gathered this spring and given to a special selection committee made up of the past 10 recipients of the award who anonymously voted to select a recipient.

Charity Scott, Professor of Law Emerita and founding director of the Center for Law, Health & Society at the College of Law, also received the Jay Healey Teaching Award in 2006.