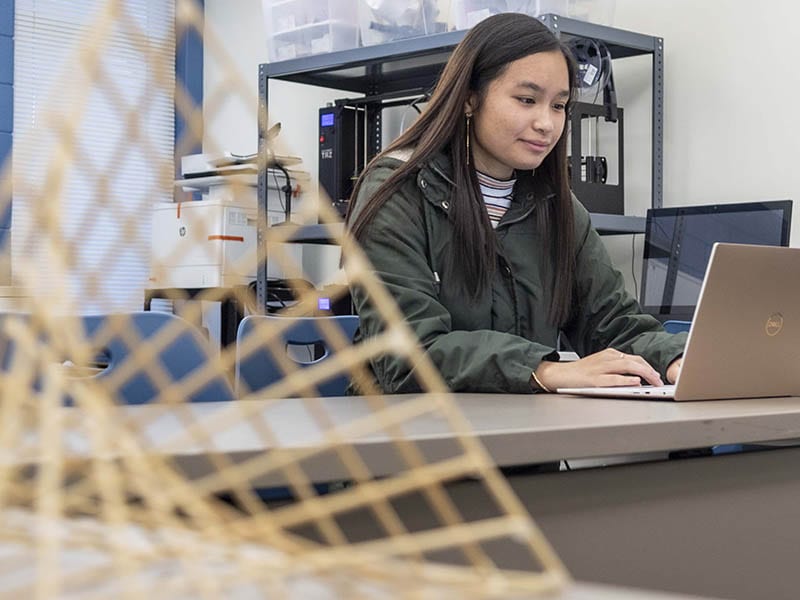 Moved by the Power of Aerospace and Fueled by a Love for STEM, First-generation Student Amy Tu Sets Her Sights on NASA.
By Rebecca Rakoczy

“I was in fifth grade, living near the Kennedy Space Center, and they launched the Atlantis spacecraft,” she recalled. “I was so moved by how powerful that launch was. I couldn’t get it out of my head.”

Tu’s early obsession with aerospace has morphed into a passion for aviation engineering. A first-generation college student and child of Vietnamese immigrants, she followed the engineering pathway at Georgia State University’s Perimeter College. She graduates this month with a 3.9 grade point average and her associate of science degree.

Tu has applied to Georgia Tech to continue her undergraduate studies in engineering and hopes to work for NASA. She credits Perimeter College for giving her a strong start.

“I absolutely love the support system with each STEM (science, technology, engineering and mathematics) professor,” she said, adding that the college offers great resources, such as the Learning & Tutoring Center. “And Perimeter overall has given me the college experience I didn’t expect to have.”

“In high school, I was a very academically oriented student and didn’t go out of my way to make connections,” Tu said. “When I got to Perimeter, I broadened my horizons. I have really enjoyed my time being a student here.”

While at Perimeter, Tu helped in the Mathematics, Engineering and Science Achievement lab and was a member of Women in STEM Experience (WiSE), where she is co-host of the club’s internal events. During STEM week in April, she also co-hosted an electrical circuits workshop with fellow engineering student Fardowsa Hassan.

In the summer of 2020, Tu was selected as a NASA Community College Aerospace Scholar, working with NASA engineers and serving as an instrument engineer for a simulation of the Artemis lunar program. Traditionally based at NASA sites throughout the country, the program was virtual during 2020 due to COVID-19 restrictions. Still, the experience further cemented Tu’s desire to work in the aerospace industry and at NASA, she said.

Earlier this year, Tu was named a semifinalist for the national SMART scholarship from the U.S. Department of Defense.

“It is such a pleasure to have her as a student in my classes,” Reddivari said. “Apart from being an A-plus student, she is extremely diligent with her coursework and is always willing to lend a helping hand to her classmates.”

Reddivari said Tu also is extremely resourceful, always finding a way to accomplish whatever task is at hand.

“Her lively demeanor and strong leadership have been instrumental in the success of WiSE through this pandemic year,” Reddivari said.